Heading up town in search of Cecil Taylor recommendations, a call at a favourite small record store in Central London turned up an unexpected find. Their business is built on Japanese, American and European tourists enquiring after the usual 60’s rock and pop stuff, but the owner’s heart is pure jazz. A stop here is rarely less than a half hour, and animated discussions, sometimes with like-minded customers.

The boss had just put up on his wall a rare beautiful Rollins on  Esquire, which was just too good to pass up. Recorded in 1956, featuring Kenny Dorham too, the Esquire pressing is immaculate as always, taken from Prestige RVG masters and pressed in the UK at the time on very heavy vinyl. The runout adds extra initials “AB” . The sound quality from fifty years ago is astonishing, as always, and at this shop they understand collectors demand VG+ at least and that they expect to pay, so they doesn’t bother with Good/ Fair/ Poor as some of the London shops do.

Superb stuff, I’m afraid Cecil will have to wait. 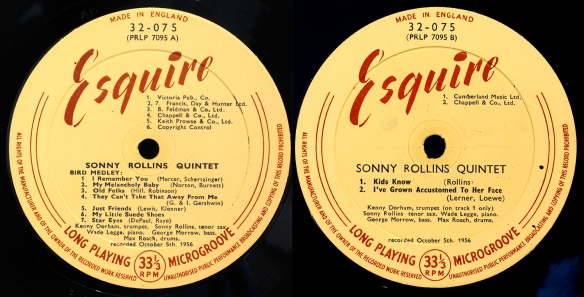 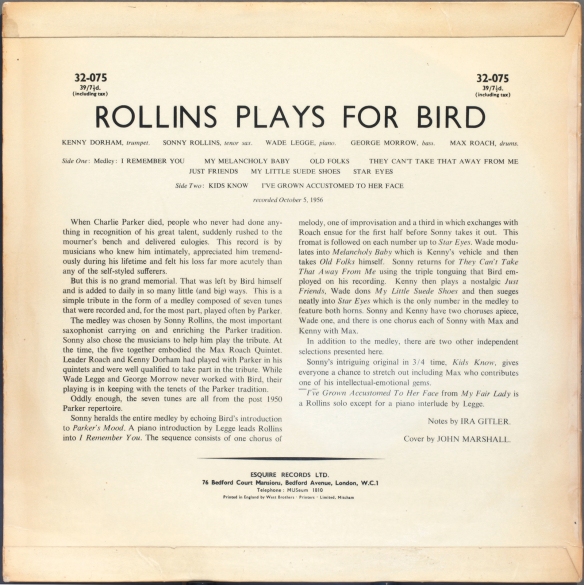 For a little fun I tracked down the 1956 original Prestige 7095, before UK Esquire produced their version for the UK market. The version below courtsey of Popsike, plus a little enhancement by myself in Photoshop to optimise the image. On Fireworks NY labels, it is a beauty to behold. Why the Brits designed alternative covers of such generally poor design (this one credited to a John Marshall, is beyond me – probably financial. The liner notes, by Ira Gitler, are word for word the same.

However my UK Esquire cost me around $70 equivalent, and it is VG+++, going on Ex. Some of the Ebay US sellers recount tales of woe, like “a two inch scratch across side two, but the other side is much better”. The Esquire pressing quality is lucious, and Rollins deep rich timbre and flying musical figures are a joy to listen to. But the US artwork is admittedly vastly superior. US cover plus UK pressing anyone?