After weeks of New York heroin-fuelled expressionist angst, time for a break, and go West, to the other America – the West Coast. Sunny happy music from 1958, superbly pressed by the best of the East, King Record Company, Japan (1974).Hampton Hawes “For Real” (US Contemporary/King re Japan.)

After narrowly avoiding death by Hammond Organ, the last thing wanted was death by Cocktail-Bar piano trio. A recommendation from Bill, proprietor of the excellent JB Records, pointed me to Hampton Hawes in this quartet format featuring Harold Land on tenor. Hawes was just a name to me, but a very pleasant suprise. Exhilarating spacious piano laced with blues-phrasing, a tight rythm section, and Harold Land’s tenor, a match for many the East Coast players, stops the format from slipping into elavator music.

“For Real” has been described as “one of Hawes most completely satisfying recording performances. Every element balanced and communicative”  Good to know he wasn’t an entirely squeaky clean either, having served time for narcotics offences, in common with his East Coast contemporaries. The other landmark of this recording is the loss  of bassist Scott la Faro (1936-61) who died in an automobile accident shortly afterwards.

“Wrap your troubles in Dreams” and sample the languid pace of this gem from Hawes and Land: 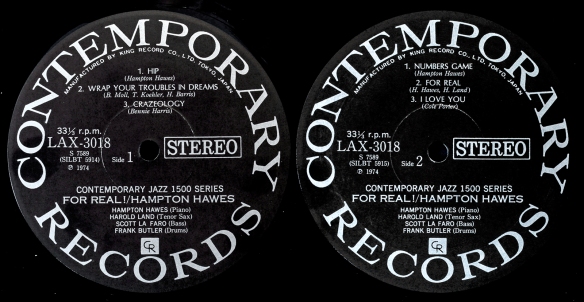 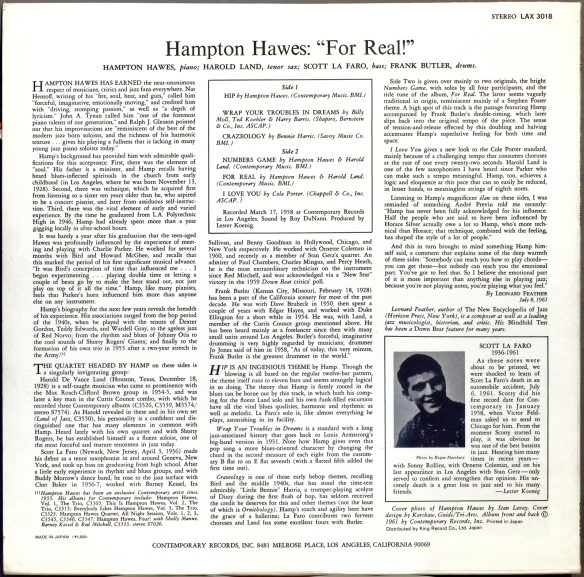