Charles Mingus Ellingtonian tour de force at the 7th Monterey Jazz Festival 1964. Hot on the heels of his European Tour, Mingus assembled a brass-heavy octet to perform selections of his spiritual father Duke Ellington (Mood Indigo, Sophisticated Lady and others) together with his own “Orange was the colour” and “Meditations on Integration” He was apparently give only a half hour performance time at Monterey, and material written for Monterey went on to be performed for the first time the following year at UCLA, possibly from where some of the music on this album must originate as there is more than a half hours worth on this double album. A mystery.

A great live recording which plunges you directly into the seven thousand strong crowd on a Sunday afternoon in Monterey, to experience the fearsome energy of Mingus and his ruthlessly-drilled octet. Mingus pressed a limited edition of LPs of the concert on his own label “Charles Mingus” records for mail order only, though this is the more widely available gatefold 1968  pressing, distributed by Fantasy Records.  Apparently Capitol, exasperated with Mingus, erased the original master tapes in 1971. If true this may explain why later reissues are such lacklustre pressings, being second or third generation derivatives and not mastered from original tapes.

Link (hat-tip Matty) to the troubled history of the Monterey tapes http://www.popmatters.com/pm/review/charles-mingus-music-written-for-monterey-1965-not-heard . It seems there a both flipback and gatefold editions on Charles Mingus Records editions (hat-tip Dott. Jazz) and this is the 1968 gatefold edition (hat-tip Anders) Phew! Thats a lot of hat-tipping!

In any event, an essential addition to the bulging vinyl shelf groaning at the letter “M”: Mobley, Mclean, Monk, Mingus…

Here, Buddy Collette here describes the experience of working with Mingus at Monterey: 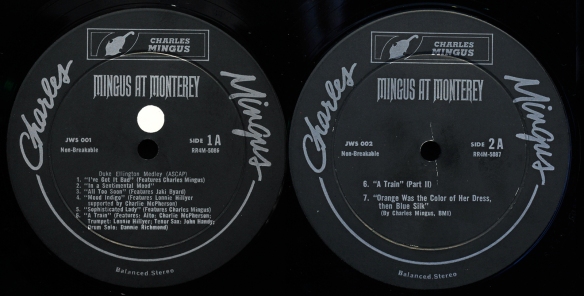