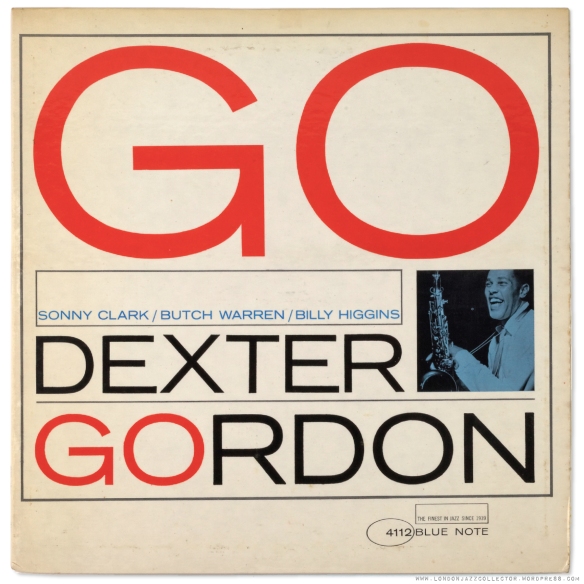 Between 1961 and 1965 Dexter Gordon recorded a string of albums for Blue Note: Doin’ Alright, Dexter Calling, Go, A Swinging Affair, Our Man in Paris, One Flight Up and Getting Around, before disappearing to Northern Europe (” make that a Danish, to go “).

Hard to choose which is the best among them, but by reputation and desirability (price!), Our Man in Paris and Go seem the most popular choice on Blue Note, though both dwarfed by the eye-wateringly expensive Dootone edition of Dexter Blows Hot and Cool. Having acquired four of the six already, Go has been on my most wanted list for some years, regularly securing second place bid in auctions. Delighted therefore when a collection of four Dexter’s came up on eBay. As often happens, all eyes were on the desirable album, Paris  (ahem, which I have an personally autographed copy of) It closed at over £100, and by luck was able to bag Go at in the mid price range. So five down, one to go, excluding Go. Got it? By way of a reminder, the cover highlights the first two letters of “Gordon”. Not Reid Miles best work.

Deserving its reputation, it is a cracking album. Dexter’s confident swaggering tenor is in fine form laying down the melody, but it is the presence of  Sonny Clark on piano that lifts this record out of the ordinary. Butch Warren and Billy Higgins anchor everything in the rythm section, giving Sonny plenty of space to let it flow. And does it flow. All the more remarkable considering one of Sonny’s main motivations at this point  must have been to afford the junk he stuck in his arm, which would eventually kill him the following year, at the young age of 32.

Blue Note’s usual superb bright rich forward presentation, in Mono, with Van Gelder working his magic in the mastering department. Big happy life-affirming music, untouched by the devilish pied piper of “free jazz”, or the lure of the soul-jazz cash register. Times moved on, but remain here captured in vinyl, to enjoy at the drop of a needle.

The flavours stretch from turn-the-lights-down-low boudoir sax on “Hang my Tears out to Dry” to bossa nova chic “Love for Sale”, kicking off here with the walking bass and ringing cymbals of “Cheese Cake” courtesy of YouTube: