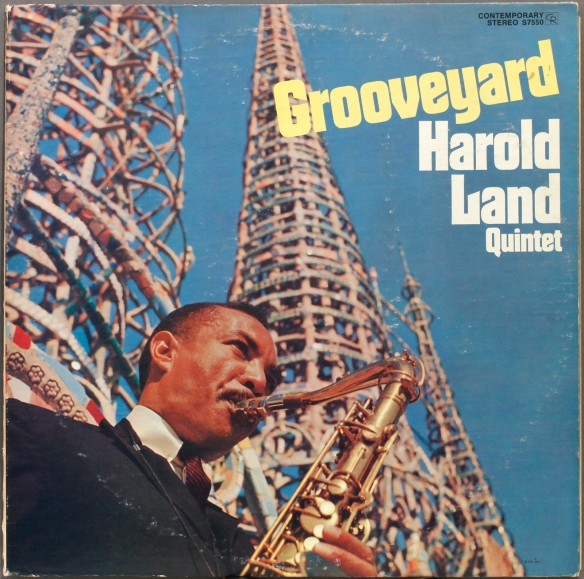 Whilst East Coast tenor players captured much of the limelight, Harold Land deserves as much attention, with his muscular  attack and flowing tenor saxophone solo runs.

Recorded here in 1958 with stalwarts of the LA jazz scene, the wonderfully named Leroy Vinnegar on bass, and Frank Butler on drums. The trumpet is Swedish-born Rolf Erricson, and on piano, the triumph of ability over disability, Carl Perkins. –  his left hand crippled by polio, which he crooked at angles to the keyboard, striking chords with use of his elbow in a “crab-like gait”. Not that you would guess from his  perfectly accomplished playing. Perkins died at the age of only 29 – younger even than Sonny Clark’s 32 years.

“Grooveyard” is good solid West Coast jazz, something I am beginning to enjoy more, while waiting for affordable collectible Blue Notes to come to market. It’s a long wait.

(UPDATE Jan 2016: the liner notes Contemporary address indicates zip code 90069. The long zip code was introduced into the US Postal System on 1st July 1963. Therefore the stereo edition of Harold in the Land of Jazz (retitled Grooveyard) was not released in 1958 as claimed but at least five or more years later.)

Contemporary Records are beautifully recorded thanks mainly to sound engineer Roy DuNann. The late fifties and early sixties US originals like this are particularly fine, though you have to pick your way around the many later reissues in circulation. Only recently I came across an apparently nice US apparently original Contemporary – until the run-out revealed a tell-tale hand-written catalogue number where there should have been a machine-stamp matrix code. Dealers are not particularly savvy on Contemporary (or possibly it suits them not to be)

Originals are not unaffordable, as the whole 50’s/60’s West Coast jazz scene is not considered especially collectible (with exceptions like Art Pepper)  The cover is however a bit of a dog, cheap production values. Perhaps it has something to do with Stereo editions being produced later. The Stereo is very nicely engineered, though the novelty factor emphasises extreme stage positioning (“Hey Dad, listen to this record I just got. It’s Stereo. Sounds like the horn player is right in the corner of the room!” “Well ain’t that amazing. Whatever next? Soon they’ll be putting a man on the Moon in Stereo, I expect”) 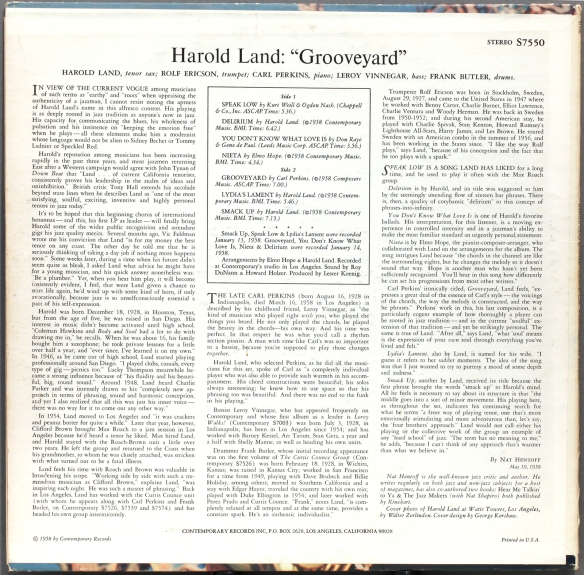