With the confidence of a half-dozen Blue Notes under his belt, Byrd takes the opportunity to point his music compass in a variety of different directions, blending occasional gospel references with a more modal approaches, encouraging new musical ingredients like Hancock and Shorter to keep the music fresh and less predictable. Gone are the dominant tunes of Fuego, and Byrd in Hand, the  comforting familiarity of “standards”, and forward towards a broader more rhythmic sensibility.

The music is spiced up by the presence of Herbie Hancock on piano, which lends it a more percussive accent, away from the romantic sweep of  Duke Pearson or straight-ahead comping of Walter Davis Jr. Wayne Shorter’s tenor also adds a more astringent tone, with his characteristic short stacatto phrasing, foreshadowing the long Hancock/ Shorter musical partnership.

Well that’s how I read it! Few signs here of the funk and fusion that overtook Byrd in the Seventies. Good music here, heading towards a more “free form”

“Original first pressing on Blue Note NY labels” with VAN GELDER stamp however an anomaly, as 4118 lacks the all important Plastylite “ear” mark in the run-out, indicating the release was possibly out of catalogue number sequence at a later date. Expert opinion suggests the record, recorded at the end of 1961, was released in 1962, however the missing ear usually indicates a Liberty pressing after 1966. An inexpensive Blue Note as a result, lacking the sparkle of a  Plastylite pressing, the only copies with significant value are those described as “Mint”, “sealed” within their shrink-wrap, or the seller has used the “rare” word, which causes collectors to start foaming at the mouth and dementedly throw large sums of money at each other. 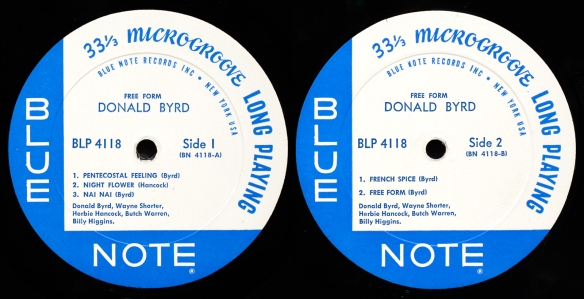