I have always loved the Cannonball Adderley/ Miles Davis version of Autumn Leaves on  Blue Note “Something Else” (BN 1595). This version has a slightly more upbeat feel, and the intertwining of Golson’s tenor with Curtis Fuller’s trombone is absolutely perfect. Golson also shows Adderley he can let it rip too. At the solo’s climax, his extraordinary gymnastic runs at blindingly fast speed, with ecstatic squeals up into the upper register, really hit the spot. If ever there was a need for a new video game, it is “Saxophone Hero, Legends of Jazz” (Nintendo and Playstation take note!)

Around this time Golson joined Art Blakeys Jazz Messengers, to my mind the best musician ever in Blakey line-up. His contribution on “Moanin’ ” (BN 4003) features Golson on absolutely top form, in my view among the ten best sax solo’s ever. He was never bettered and a complete contrast to the later Wayne Shorter’s cold and measured playing.

Golson never achieved the fame of some of the other jazz elite, I think failing to project the necessary “mean and moody” or “enigmatic” persona.  Instead he always smiling to camera, and probably not on heroin. Eventually his prodigious talent drew him into a career composing and arranging for the big studios, and never returned to live performance. However a rich legacy of recorded work remains, joyful and exuberant playing, always a memorable melodic angle to his solos and compositions alike.

Original cover from Prestige  This release is one of the few occasions  Esquire used the original American cover art. 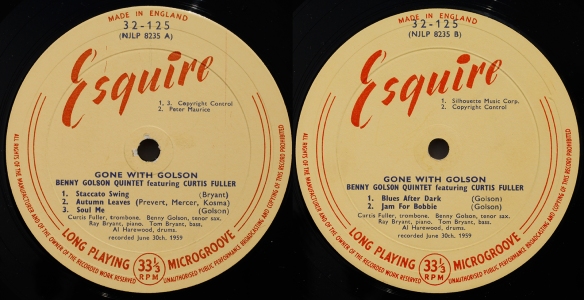 This Esquire release fell into my lap inexpensively, due to the seller listing only the record title and artist name, and not maximizing search matches, thereby missing many dozens of potential buyers. They also failed to describe the pressing as “rare”, “near-mint”, and “beautiful copy”, all of which could have applied.

As a result, I was sole bidder and the auction closed at £3.00 plus postage. Crazy, it’s not enough, but sometimes it happens that way. It makes up for the times you get drawn into a  Sunday night ebay three-way competition between the Land of the Rising Yen and our friends from the land of the Deutsche Bundesbank. That almost always hurts.