The Tempo label is the UK’s premier division of British jazz pressings of the Fifties and early Sixties, whose mythical status and extreme rarity commands prices starting at around £500. What sets them apart from Contemporary Vogue, which are pretty good in their own right, is the extraordinarily fine engineering and pressing of these all British recordings. This pressing delivers just about as perfect tonal range and physical musical presence as I think is possible in a record. Any more and you will be pouring a fresh cup of tea for the musicians in your living room.

It is only about the second or third Tempo I have ever seen in the flesh, and the first it has been my privilege to own. I am honoured. It came from the disposal of a small part of the collection of a well-known british jazz musician popular in the Fifties and Sixties.

I had never heard of Wilton Gaynair before, but he was apparently from the same stock as Dizzy Reece, and similar in background to the legendary and sought after Joe Harriot. These were black jazz musicians from the West Indies as opposed to Afro-American stock, which seems to have struck a chord with current british cognoscenti of jazz and funk, especially the DJ-tendency. These are the guys who start foaming at the mouth at any mention of Sahib Shihab.

Gaynair has a fabulous rounded tenor voice, quite fresh and with powerful grasp of variation in melody and speed that is a joy to listen to, and sufficiently different to refresh your palate with British Jazz (via the West Indies) like a nice cup of tea. 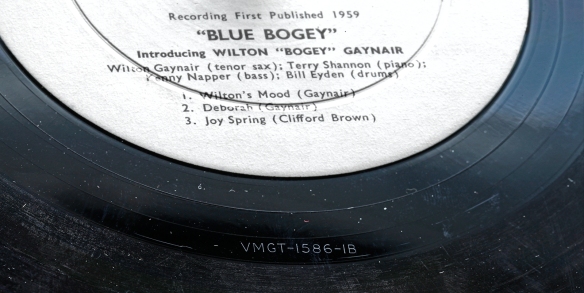 Liner notes by the British jazz promoter and equivalent to Alfred Lion, Tony Hall, whose close links with TV and radio recording industry helped to ensure the financial survival of the small British Jazz scene.

The recommendation on the record came from the shop manager who commended the tenor playing of Wilton, and filled me in on some of the background. First out of the box for a private viewing before being put on sale, it demonstrated the advantage of being a regular customer who takes time for a friendly chat. I grabbed a couple of the more interesting rarities, having already got copies of many in the collection, inevitably due to the previous owner having similar taste to my own.

Cover in fairly terrible condition, laminated soft card very vulnerable to tears and scuffing, this is no beauty, but I doubt you will ever see another to compare.

The less said about the title “Blue Bogey” the better, a “bogey” being common parlance for nose-pickings. As for Blue Bogey, well, I shudder to think of the task given the record company promoters on this one. “Hi there nose-pickers! Have we got a pick for you! And he’s not “gay” (as far as we know) Its Wilton (that’s a type of luxury fine woven carpet) Gaynair.

British Jazz fans have a cult following of the likes of Tubby Hayes, who often sharpened his jazz credentials recording with the New York scene (doing a sterling performance with Dizzy Reece of ‘Round about Midnight on BN 4006 Blues in Trinity) Tempo is something to look out for, and if ever I see another its max out with the credit card. Nothing chauvinistic about UK Jazz from LondonJazzCollector, but this is good music, from London (breast swells a little with pride) 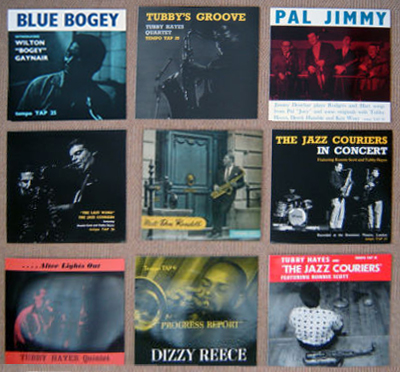 Some of the Tempo family, Japanese collector special reissues, as being sold on ebay.