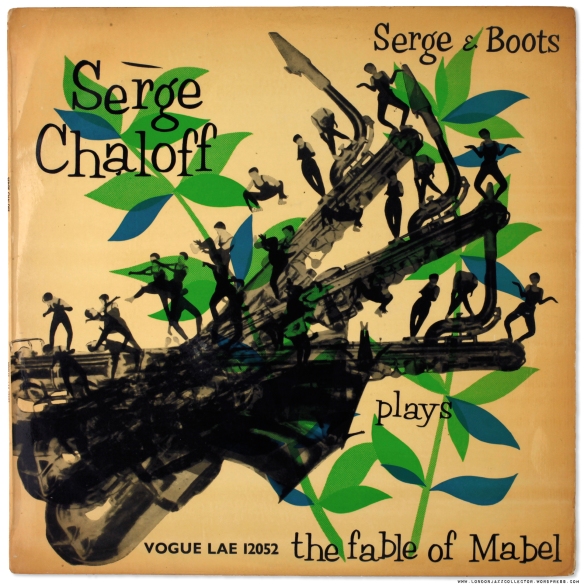 Selection: The Fable of Mabel (Twardzik)

Serge Chaloff, the premiere baritone sax player of the early Fifties who paved the way for Gerry Mulligan and followed in the footsteps of Harry Carney, Duke Ellington’s baritone player. Chaloff’s playing style could best be described as “in the manner of Charlie Parker on Steroids”. The line up on Mabel includes Dick Twardzik on piano, who wrote the title track, and whose piano career was severely curtailed by his dying in Paris while on tour with Chet Baker the following year. Nothing new in todays “rock n roll” lifestyle. Pleasant surprise for me on this recording was Charlie Mariano on alto. I still enjoy listening to my CD of Charlie’s 75th Birthday concert,  and his lyrical distinctive alto voice.

Chaloff, according to the liner notes, was “one of the most chaotic personalities in music”. quite an achievement given the erratic behaviour and unstable lifestyle of so many other musicians at the time. One reads of session leaders booking a spare saxophonist or pianist for recording sessions, “just in case” the star player didn’t show up . Chaloff had severe health problems, battling spinal paralysis, spending time on crutches and in a wheelchair, yet still managed to manhandle a baritone sax weighing just short of 7kg.

An interesting record, with music originating on previously issued 10″ records.

First UK issue on 12″, re-mastered by engineer “E” – not the legendary “B” who’s initial is found on the vast array of Contemporary Vogue first pressings through the late Fifties and early Sixties.

Showing its fifty five years age in the yellowing of the paper card cover.

What you would call a “posh” address, 113-115 Fulham Road, London SW3, a short walk from South Kensington and the museums.  The Knightsbridge telephone number has three lines, probably managed by a telephone switchboard girl – “putting you through now caller” – and a receptionist with good breeding and a cut glass Home Counties accent. “I’ll just see if Mr Jones can see you. Would you like a cup of tea while you wait?”

How different today: “Hello, this is a machine. Press One to speak to another machine, press Two to speak to a different machine, or hold the line indefinitely while we hold you in a queue. All of our agents are busy right now helping other callers (but not you) Thank you for calling Vogue Records, your call is important to us, but unfortunately not important enough to answer. You might want to call back later when we are less busy.”

How “rare” is this? Circa 1954 UK Vogue Records, some time before the Contemporary Vogue tie up. Not at all expensive, at around £15 as I recall, via eBay. Probably had a lot of the younger collectors baffled. I mean, check the cover. The heroine of the title track was an apparently a woman who liked her men to have plenty of sax appeal. Plenty to choose from on this recording.