I’ll leave it to the authoritative All Music to talk the talk:

“Sonny Stitt played alto sax in Charlie Parker’s style. This informal session is one that Stitt apparently forgot about, which is why the personnel (probably a local rhythm section that might include pianist Barry Harris) has never been definitely identified. Stitt, doubling on alto and tenor, plays some songs with unfamiliar titles, but all of the chord changes of the originals (half of them blues) are fairly basic. He is in above-average form, making this set of interest to bebop collectors.”

So it’s Charlie Parker-ish but with modern studio depth of sound and solid rhythm section, and without umpteen takes, and its a solid Chicago bluesy feel. Sounds good to me, and Barry Harris always puts in a really strong performance on piano.
Vinyl:

First released in the US 1960 on Argo  this pressing is on the French Barclay label, I would guess from the weight of the vinyl and the style of typography on the jacket, more or less around the same time.

The French Barclay record label has an eccentric lineage. Founded by Frenchman Eduard  Ruault who in 1945, with the fashion for American music, changed his name to Eddie Barclay.  After a visit in the Fifties to the US to see the new recording technology that enabled the production of 45s and LPs,  Barclay began promoting the new microgroove format in France.

As well as releasing US records, Barclay engaged Gerhard Lehner, a German sound engineer, to make original recordings. Perhaps he had noted the critical importance of the engineer, as in Van Gelder, DuNann, and other heroes of music recording. Barclay Records rose to become one of the top music production companies in France, earning Eddie the nickname “roi du microsillon” (king of microgroove). He also managed to marry nine times in the course of his life. Perhaps his local marriage bureau did attractive trade-in offers.

Known initially for its jazz and popular French releases, in the Sixties and beyond Barclay went on to release The Sex Pistols and Jimi Hendrix on an unsuspecting French public still coming to terms with Johnny Haliday and Charles Aznavour. In the early 80’s he sold the label to Polygram and retired to Saint Tropez, where his signature white suit was  famous at his ” French media parties”, at which the rich and famous all wore white too, “Les Nuits Blanches”,  an annual Summer event up until his death in 2005.

Ah yes, the vinyl. The pressing sounds excellent, as you would expect from the technology of the day. And it is the second record I have from the megalomaniac “Michael Gluckman” collection. 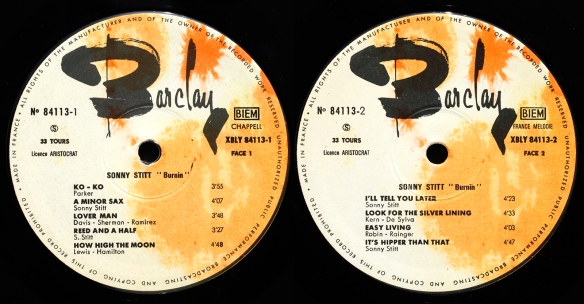 Original release on Argo, below , is more valuable needless to say. Barclay had applied a little creative plastic surgery to his cover

Though not a lot.

The Barclay record is rare, but not in any way valuable, an ideal introduction to the delights of Sonny Stitt. And to test your French translation skills: “On rappele toujours Charlie Parker a propos de Sonny Stitt”. And being French, the writer of the liner notes could not resist drawing parallels with France’s only giant of jazz, Sidney Bechet. Still, France gave us Charles Aznavour, for which I am sure we are all extremely grateful. Not to forget Serge Gainsbourg and Jane Birkin, la la la la lah, Je t’aime.