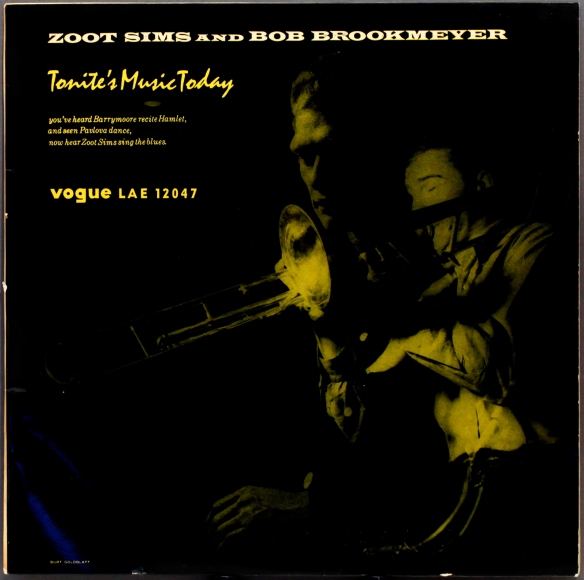 Bonus Track – without Zoot singing: “I Hear a Rhapsody” >

Bio: AllAboutJazz on Bob Brookmeyer: “In the 1950s, there certainly was no shortage of great trombonists—J.J. Johnson, Kai Winding, Urbie Green, Carl Fontana, Frank Rosolino, Curtis Fuller and many others. But Bob was different for several reasons:

For one, Bob played valve trombone, on which a player must use valves instead of a slide to change notes.The resulting sound combined the regal tones of a French horn with the unmistakable insistent sass of a slide trombone. For another, Bob adored harmony and counterpoint, making him the perfect collaborator in the cooler jazz combos emerging on the East and West coasts in the early ’50s.”

Zoot sings on “Blues”, and he is not bad, and better still, just a couple of lines.Over to an Amazon customer  review: “Blues has a real down-home flavor to it, even when Hank Jones switches over to celeste for a chorus; Zoot even sings a chorus (his first vocal on record), though it’s nothing to write home about. Zoot once admitted in an interview that he loved to sing, though he rarely did so on record – probably just as well”

A songless track is offered by way of apology to any blues fans.

Hank Jones is the unspoken star of the track Blues. When I used to listen to blues in the 1960s British “Blues Boom” I had a few traditional blues pianists albums – Eddie Boyd, Otis Spann, Champion Jack Dupree, and many I have forgotten. They were no match for “proper” jazz musicians like Hank Jones turning their hand to blues. And with the added spice of good saxophone, thank you Zoot. 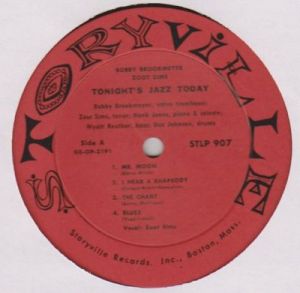 However this release UK Vogue LAE 12047 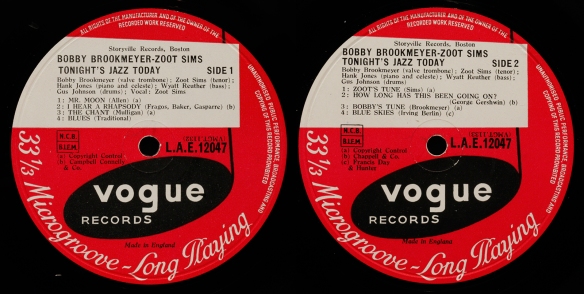 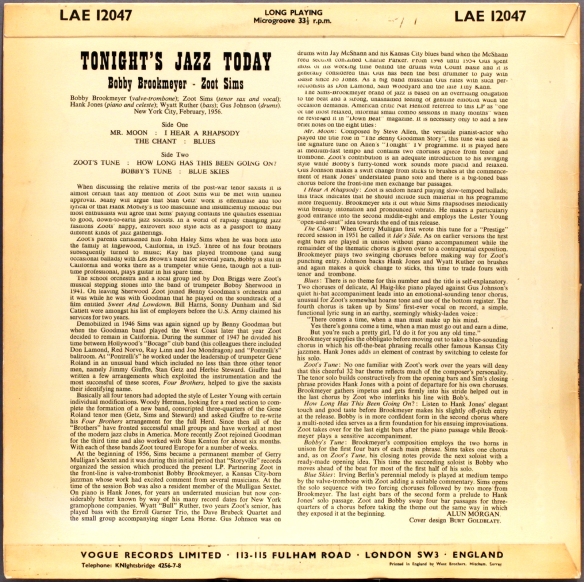 $75-300 as a Storyville original, this Vogue pressing (excellent, except for one track, with a short but  audible spindle scuff on the blues-singing Zoot track, for about five revs) less than £20 on eBay.  I guess I could have asked for an adjustment on account of the spelling mistake on the cover “Tonite” rather than as elsewhere, “Tonight”. Bit academic really.