One of Cannonball Adderley’s very first recordings from 1955, the first cover alludes subtly to Adderley’s generous frame on Savoy thus: 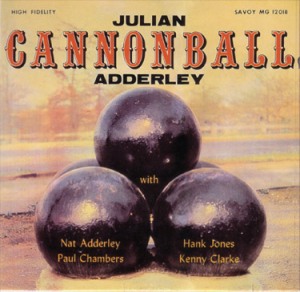 Julian “Cannonball” Adderley loved to play in an unashamed bluesy vein, and having found his alto voice, no-one was going to slow him down. His alto is infectiously energetic, flying high and swinging from bar to bar with boundless enthusiasm, while Hank Jones carrys the composition and Paul Chambers and Kenny Clarke maintain the forward propulsion. A great and under-appreciated recording.

Early 1960s weighty vinyl, with a little surface noise from scuffing and a few light scratches but music that play through.The depth of groove cut on these heavy pressings protected most of the music signal inscribed on its walls from the surface damage caused by errant radiogram arms and poor domestic hygiene. I am amazed how well these older records survived. In contrast, a recent small spindle-skate on a modern thin record (butterfingers!!) caused instant clicks despite looking quite superficial, destined the vinyl for a second career as a frisbee.

This recording has been reissued with a bewildering variety of cover designs and titles: 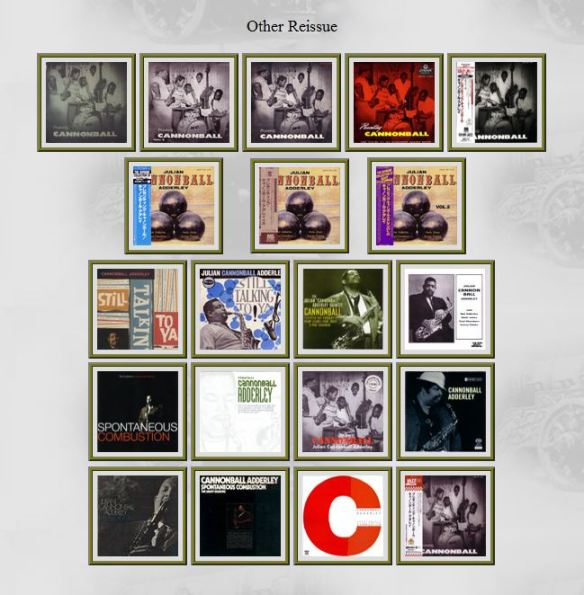 UK Eros opted for typography, a stock library shot of Cannonball without his trademark imposing bulk, and a new title , invoking colourful New York “jive talk”  with the essential “n apostrophe” and the innovative “ya”, Still Talkin’ to Ya.

What a line up!  You get Paul Chambers, Kenny Clarke, Hank Jones and not one but two Adderleys. And a slightly noisy surface. Dirt cheap – a few pounds – in the remainder/reissues bin, as the seller had no interest in its provenance, and figured he would be lucky to sell it.

Eros issued some great classic jazz on super pressings, that turn up not infrequently for small change, and are well worth getting your hands on.