Artist credits clearly caused the Esquire management some difficulty. Discographies clearly attribute the recording session to that well-known group, the “Prestige All Stars”, meaning whoever happened to be in New York and free that day to record for Prestige.

Illustrating the heirarchy of the musician’s world, on the US cover the soloists are listed first, in alphabetical order from Burrell to Waldron (piano included with the stars as Mal wrote a couple of the songs). The bass and drums are relegated to the list end, out of alphabetical sequence, but at least in their own alphabetical order and everyone is equal font size. What do the Masters of British Diplomacy do?  The Esquire credit roll reads like an optician’s wall chart. Cover your left eye please, now read me the last line, take your time   E, D, T, H, I, G, P, E…  Sorry I can’t read the last line. Fail. Diminishing font size! There is plenty of space free, it’s just Upstairs Downstairs. Rhythm section downstairs with the servants

Not one but two new finds for me on this record. Hal McKusick on alto is a delight. Light fluid, delicate touch, inevitable Konitz influence but structured thoughtful and original improvisation. The other is Al Cohn on tenor, long-term musical sparring partner of Zoot Sims. Cohn has a quite touching tone, kicks off interesting melodic lines,  with a poignant vibrato at the end of phrases that reminded me, not of Hawkins or Bechet, but of the great guitar gods for some reason. I like this tenor voice, more Cohn please.

Burrell is Burrell – never runs short of notes to play, great as always, and Art Farmer is cool and polished. With this record you can put your feet up and enjoy each solo in turn, knowing another will come up in just a few minutes, while Waldron keeps everything moving along nicely, and then deserving of his placing among the soloists.

Oh dear. I seem to have overlooked the rhythm section.

Once again, the US original streaks into the lead on account of managing to include some earth in the cover shot, something which eluded the badly-briefed British designer, who evidently  thought the record was entitled “Some weather-beaten old planks”.

The pressing is a delight as always with Esquire, pressed with original US stampers, rich and lively and 180gm vinyl.  Van Gelder’s RVG hallmark machine stamp at 1-o’clock both sides, an interesting symetry. Geek Alert! The sucker punch is the presence of “AB” at 5 o’clock on Side B. Recent posts have suggested an unconfirmed assumption that AB indicates the Abbey Record Plant, and an AB engraving is a common feature of many Prestige pressings. However this is a British pressing. Or at least I have thought it was until now. Either these records were pressed in the US by Abbey for Esquire and imported here (improbable), or it is inscribed on the original Matrix, (not likely as Prestige shopped around different plants) or Abbey supplied the stampers  shipped to the UK, or AB means something entirely else. 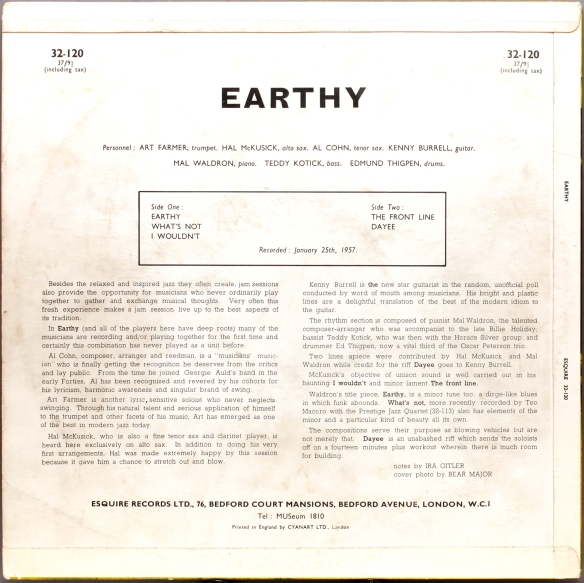 EBay seller overlooked a nasty short audible scuff  on the opening track, so much for “VG++”, but it is in excellent condition apart from that one flaw, and it is not exactly fatal, over in four or five revs. Its a dilema with these rare items. Send it back an chances of seeing another are slim. It was claimed to be VG++, not Excellent..

“Get Leonardo Da Vinci on the phone, honey.

Hi Leo, how you doing? Listen Leo, about that painting  you sent me. You know, the one with the smiling dame ? Lisa something or other. There’s a tear in the corner… I know its just a small tear, but I am afraid we are goin’ to have to post it back.

Sometimes you just have to take the rough with the smooth, all part of the vinyl experience.