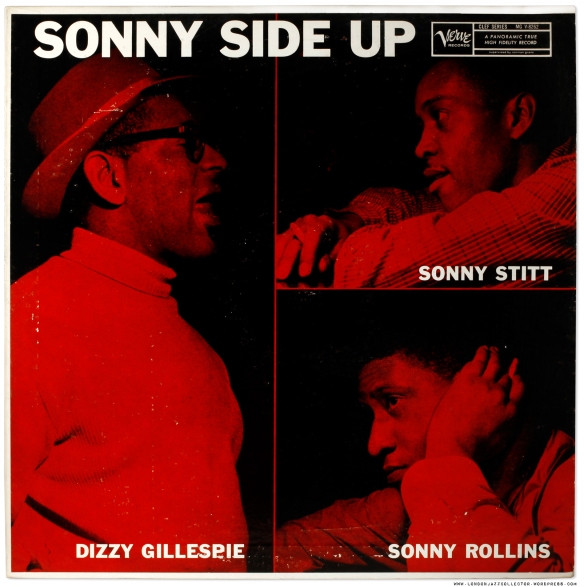 Long and very fast (Podiatrist Advisory – foot-tap in moderation: do not exceed recommended number of taps per listening session)

I don’t know Stitt’s history well but he replaced Coltrane with Miles Davis a couple of years later, in 1960, only to be replaced quickly himself by Hank Mobley due to issues with alcohol. In Stitt’s 1982 obituary, the NY Times declared “his style was likened to Charlie Parker”.  To be likened to the Bird is no mean achievement for any musician. Perhaps to escape this alto legacy, Stitt often took to the tenor, which he plays here with the same speed and inventiveness.

Music at a pace that makes you check you haven’t inadvertantly switched your TT to 45rpm. Stitt, the true disciple of Charlie Parker, similarly with boundless energy and in 1957 at the age of 33, lots still to come. Rollins in peak of form soon after recording Saxophone Collossus and his releases for Blue Note.

Dizzy sings a little on “Sunnny Side of the Street” but fortunately, other than that, sticks to playing eloquently, with age and maturity on his side. Ray Bryant maintains his well deserved reputation on piano, and Rays brother, Tom Bryant and Charlie Persip, motor away below stairs, but the action is handed to the tenors to battle it out.

Stitt is like a runaway express train that’s just passed signals at red, and gathering even more speed, demanding Rollins’ train keep up. The Stitt composition Eternal Triangle is exhausting, but exhilarating, as the tenors trade licks to see who can out-do the other. In some of the final rounds, the speed is literally frightening. Usually I have a preference for ballads, melancholy and the minor key, but this is fast and tight playing and I have to say, I like it. Rollins, I judge, is not quite as fleet as Stitt, but of richer tone and weight, which is no less a pleasure to be enjoyed.

Only my second original Verve. That cost me a few quid as well. Deep groove and a lively, natural pressing, full of life. Supervised by Norman Granz, legendary producer who created Verve. Alas no one is given credit for a fine recording. Van Gelder, Bock, Dowd and DuNann would not have approved. Verve house engineer in this period was Val Valentine (hat tip poster George) though this recording does not feature in Valentine’s discography list.

I like visiting Ealing. A pleasant suburb of West London, there are some good Polish deli’s there, and an interesting branch of the Wickes Home Improvement Centre. OK, there’s a record shop too, you guessed, specialising in Fifties and Sixties, and doing a brisk trade in pop singles from the golden age when I dropped by. A lot of older record collectors seem driven by nostalgia. Much overrated in my view, nostalgia isn’t what it used to be.

As is customary, I was almost out of the shop when the proprietor Paul called out with a last minute suggestion. “Rollins and those sort of blokes is your thing isn’t it? What about this?” holding up a Verve Clef I had not seen. Interesting it was too. Gillespie is a little old school, but Rollins and Stitt definitely rang my bell. So take the plunge, a little more damage to the plastic card, and on to the Wickes Home Improvement centre, happily munching from a paper bag of those delicious plum-in-chocolate Polish sweets, sliwka. By the time I got home, none were left .

Apart from this one, that got away…

“…leave your troubles on your doorstep,

to the sunny side of the sweet”