Ever since discovering the joys of “Autumn Leaves” on Adderley and Miles “Something Else” I cant resist it as a perfect foil for the saxophone soloist, with those wonderful chord changes. Zoot does a great job, as he should. Zoot’s playing is just fantastic, you can feel the energy flowing through him in a live audience setting, pushing the envelope.

Gramophone magazine said at the time:” So far this has been an extremely good year for collectors of Zoot Sims’s records. “Solo For Zoot” is the second album to appear on the Fontana label commemorating Zoot’s performances at the Ronnie Scott Club last year. Unlike the first LP—Fontana mono TFL5176: stereo STFL588—this one has just Sims and a rhythm section, with no British saxophonists or trumpeters. It is unusual to find an LP opening with a slow blues, although I see no reason why this should be so. Blues In E Flat, a supremely impressive performance, should kill stone-dead the libellous implication that white musicians are unable to play blues with conviction…

It is quite surprising to discover the effect that Sims has on his British colleagues, for he certainly inspires them to great heights. Whenever he concedes the solo position to pianist Stan Tracey, for instance, the time of the performance is never quite as good. Tracey tends to drop into his Thelonious Monk style after a few choruses but his solo on the Blues is excellent; sparse-noted, rather in the basic manner, his playing here continues the mood created by the tenor. Kenny Napper’s short ‘walking’ bass solo on the same track is effective despite occasional lapses of intonation.Dougan’s drumming is generally acceptable…”

(“Generally acceptable?”  Would you want that read out to the grieving family at your funeral? “He was by consensus a generally acceptable drummer”  At that point Jackie Dougan decided to quit drumming, and instead applied for hire as an assassin of music critics. A  position much sought after) 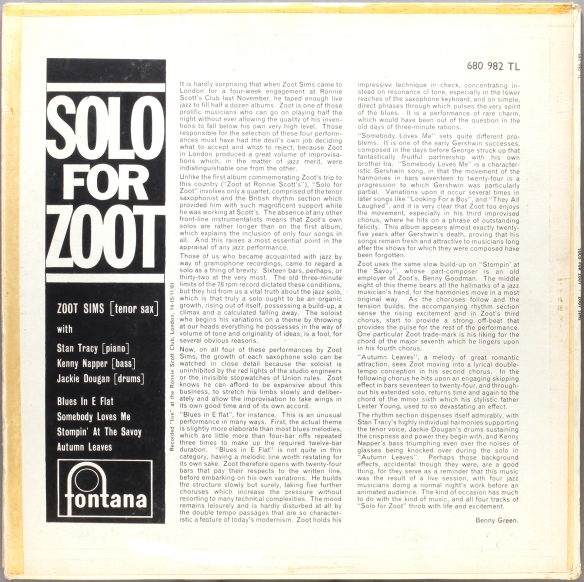 Crikey! This is one expensive record, I had no idea! Popsike tells the story:

Just done my homework after every thing is done and dusted. Had I known I probably wouldn’t have bothered bidding. Mine creeps in between the bottom two. OK it has some Sellotape marks around the edges, but then so do a great many others from around this period. The average American family in 1961 probably spent more on Sellotape than food. Makes you feel quite privileged to own it. It sounds great.