McGhee album titles in the course of the Fifties and Sixties (Maggie’s Back in Town, Together Again, The Return of Howard McGhee) have a recurring theme – I’m back (unspoken: out of prison) his recording dates punctuated by lengthy absences on narcotics charges.This session was recorded after a lengthy gap between 1955 and 1961

It could almost be a Phineas Newborn record, as the irrepressible inventive Newborn is frequently promoted from rhythm section to soloist. Edwards and McGhee had worked together in the late Forties, and picked up fifteen yeas later, with  Edwards’s title tune celebrating the reunion. Teddy Edwards name was new to me, and possibly his decision to remain on the West Coast over those years rather than move to New York denied him wider recognition. Ray Brown gets a good outing here too, with rock-solid walking base lines, though Ed Thigpen seems a lttle restrained.
Vinyl: LAC 12291 Vogue 1st UK release of US Contemporary M 3588

Mono and a fine recording as always from Ray DuNann, pressed in the UK by Decca. You really can’t fault the quality, and I reckon the previous owner was not taken with it, due to absence of spindle marks. Always nice when that comes along. 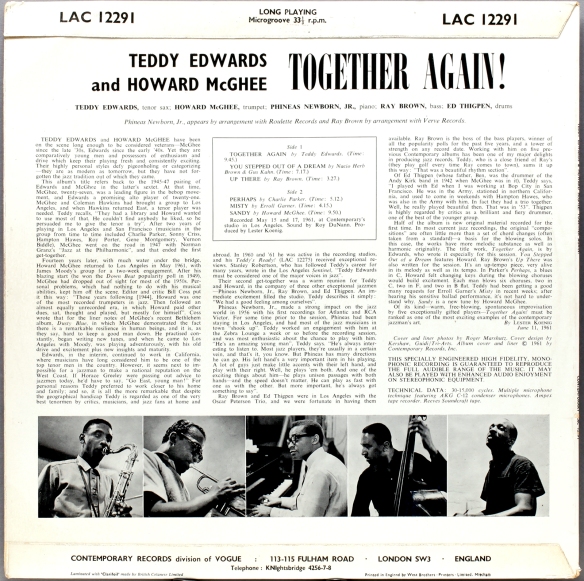 McGhee’s Contemporary recordings seem to have a collector cachet over and above the run of the mill Contemporary releases, if prices are anything to go by (if not that, then what else?)  West Coast Contemporary records are not exactly rare, though I have noted before the second-hand market is flush with anonymous modern reissues (always the yellow US livery, never the greenish UK Vogue) usually cheap (£12-15)  but sometimes priced like a rarer US original (£30-ish). The McGhee (and Art Pepper likewise) however tend to be offered at around double than that for lesser titles.

This record had been on my McGhee wants list for quite some time, and popped up quite unexpectedly in my post on “Buy it Now”, at a considerable discount due to the front cover being disfigured by one of those evil white address labels designed never to come off envelopes. From experience, unlike most price stickers, these labels  can be  near-impossible to remove from record covers without disfiguring the cover further (I’ve made that mistake before). Shame about the cover defect, but too good an opportunity to miss.

Having had mixed experiences with WD40, a  water-displacing light oil for which miracles are claimed, I decided experience isn’t always the best teacher, and determined to have another go, to rescue this lovely cover. If you look at the bottom right corner of the cover you will see just the one small white tear after successful removal of the white label – a small patch torn off the laminate where previously someone  had a go at lifting the label, as usually happens, but thankfully, had stopped.

The difference this time was a new special ingredient: patience. Generally I don’t do patience – in with both feet, straight away. Gently dabbing the label with WD40, the oil was absorbed immediately, but without any loosening result. This time I gave the label a second liberal squoosh of WD40, until no more was absorbed and the oil lay flat on the label surface. I covered the wet label with thin polythene to slow any evaporation, and went away and amused myself for a couple of hours reading record matrix codes.

After a couple of hours a little test found the oily label had given up its vice-like grip on the laminated cover, could be carefully teased up at each corner without lifting the laminate, and finally could be pulled away leaving the cover intact. Probably even easier if left a day, if you get the hang of this patience stuff.

Impressed with my success, I tried to find a supply of more patience on eBay. But when I found it took weeks to deliver, I quickly gave up.