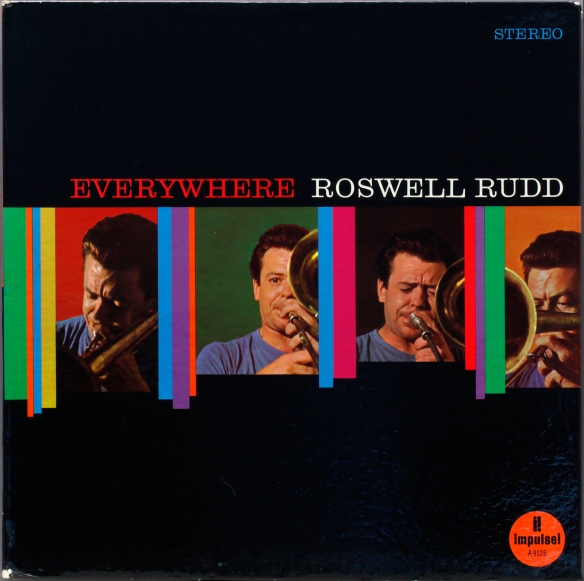 Pocket-Bio:  Roswell Rudd was a key player in the spawning of free jazz in the 1960’s, recording with Archie Shepp, Cecil Taylor, Don Cherry, Pharoah Sanders, and John Tchicai. Rudd is still playing, age 77, and tours with Shepp today. He was voted “Trombonist of the year” three years in a row by jazz critics 2003+, I imagine against limited competition. I mean, would you buy your neighbour’s child a trombone for their birthday? Not if you had thin walls you wouldn’t.

Along with the inevitable educator/ academic role, Rudd added considerably to his frequent flyer miles by developing musical links with Mali 7,000 miles away. Notably he has collaborated with kora player Toumani Diabaté, (of whom I just happen to have four CDs, acquired during my similar interest in West African music, though without the air miles)  Kora and trombone sounds intriguing.

Recorded in the land of “fruits, nuts and flakes”, in San Francisco 1966, Rudd’s debut album as leader. The almighty Allmusic assign it the kiss of death on both cheeks, damned with the faintest of praise : “.. rambles a lot…but has some moments of interest. Rudd plays reasonably well…an intriguing but far from essential date”  Sort of thing you would not want to read on your feedback from a Lonely Hearts Agency, or indeed on your tombstone: “He played reasonably well”. In review-speak I think it means they didn’t like it, but you be the judge.

The trombone is a  powerful emotive instrument in a free jazz setting. The brassiest of the brass instruments, brooding, dark and full of menace. It creates a pungent harmony with Kenyatta’s alto, quite different from the usual  elegant instrument pairings, almost modern-classical in its atonal rendering. Charlie Haden’s bass adds a note of ambient waywardness.

Vinyl:  Impulse A9126 US original, Stereo

Slightly crackly surface noise, a little intrusive in the quiet passages.  The rip was made before cleaning, mea culpa, so it’s not as clean as it should be, though I rather think some it will remain. Vinyl can test your tolerance sometimes.

It’s a shame the record industry back in the Sixties didn’t put more effort into making records more scratch-resistant rather than its headlong dash to the infernal silver disc. Records could have been protected, for example, by  banning the use of portable record players at dance parties, and even, amputation of the  hands of clumsy serial record scratchers. Extreme measures perhaps, but for the preservation of our vinyl heritage it would have been worth it. 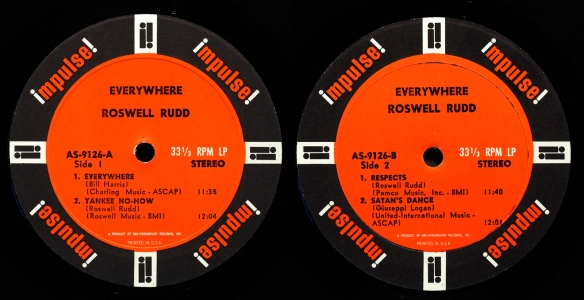 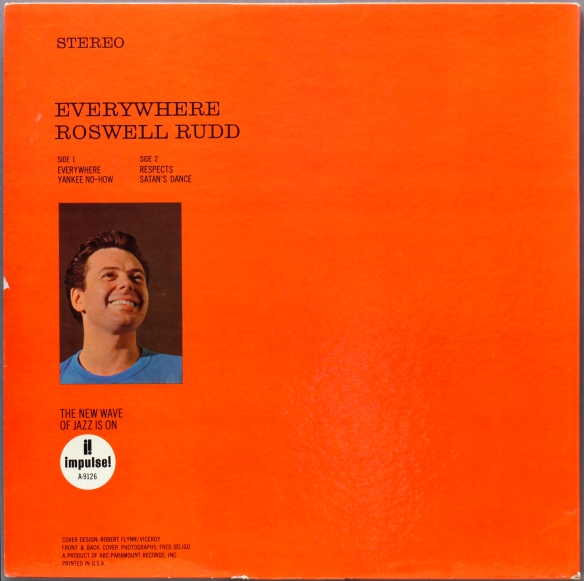 Sitting in on a shop basement shelf, waiting for someone with a spirit of adventure to find it a new home.

Fans of straight ahead bop often have difficulty with free jazz, and I include myself among them. It has been noted before, people who have no difficulty with abstract art, nevertheless find themselves unable to embrace abstract music. At one end of the art spectrum you have hyper-realism , at the other,  pure abstraction and even escape from the canvas and frame altogether. Yet we ask music to tell a story in rhythm, melody and harmony, beginning middle and end,  and in pop format, to tell a story in words. And probably 90% of words are to say how much I luurve you baby.

A portrait of a beautiful woman should always have two eyes and ears, a nose and mouth, but not  necessarily in their expected place. It’s all in the attitude.

Goldmine, that mine of occasionally accurate information, list two releases of AS 9126 , one in 1967 by “Impulse” and another in 1968 by “ABC Impulse”. I can only surmise this is the earlier 1967 release. Seems likely there were some kind of  corporate shenanigans at ABC Paramount Records Inc. around this time, which requires further research. Impulse is not at all well documented, unlike Blue Note. According to Wiki – the corporate name of Am-Par Record Corporation was changed to ABC-Paramount Records, Inc. in 1962, and then to ABC Records, Inc. in 1967.

Seems this title is not an RVG master – very faint initials “LW” can be found on side 1 quarter way round anti-clockwise from the matrix .You need pretty good eyesight to notice it, I certainly didn’t first time around. The engineering is credited is one “Bob Arnold” so the mystery tag may be a disgruntled employee somewhere in the factory process wanting his two minutes of fame.

The matrix is machine stamped, so it looks like everything for this release was prepared by different hands to earlier Impulse titles. 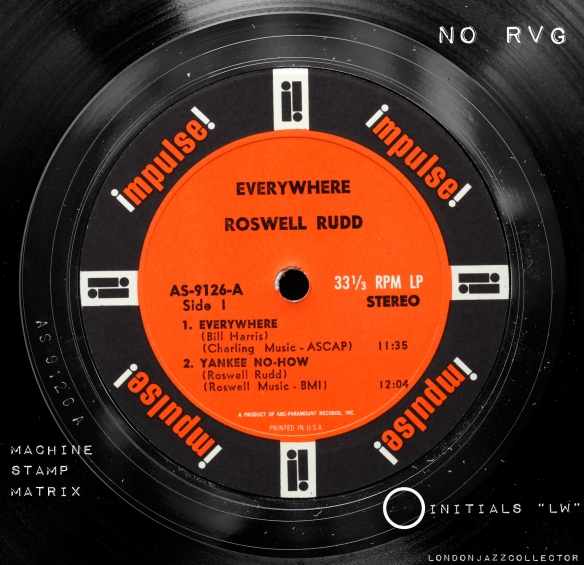