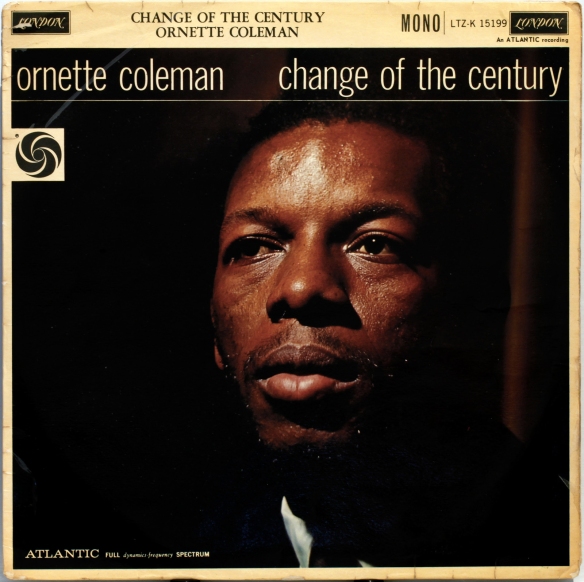 Ornette Coleman seems to attract as devoted a following as does Coltrane, judging by the number of search engine derived page views I see. A courageous musician who charted his own course against the tide, but with an ardent following built among the bohemian faction of jazz aficionados. This was only his second album for Atlantic, following rapidly on “Shape of Jazz to come”,  but the fracture lines with more mainstream bop are increasingly evident.

The first sign was once again jettisoning the piano. Out went the musical terra firma, the ground, and concept of a brass soloist conversing with the rhythm section. From here on, it is time to strap on the goatee and get strokin’. Two soloists – Coleman and Don Cherry – eavesdrop on a conversation between the bass and the percussion, but determined to make their own statements. As Coleman puts it, “each member goes his own way and still adds tellingly to the group endeavor” While the rhythm section continued to provide enough swing to keep the tune moving forward, Coleman and Cherry stretched the melodic boundaries.

The Charlie Parker inspired selection “Bird Food” is the closest to a bridge between old and new, and it is the track I find easiest to relate to. The second selection  “Una Muy Bonita”  is more adventurous, meaning not to everyone’s taste.  After a lengthy introduction,  the soloists are given free rein, its theme stops and starts in unexpected places, inviting the listener to similarly abandon their preconceptions of where the tune should go. A few more vinyl clicks and pops in the second selection challenge the listener to stay focussed on the  music.

As is customary with bohemian icons , Ornette’s cover portrait shows his serious side, no smiling to camera, no silly finger signs, simple dignity. 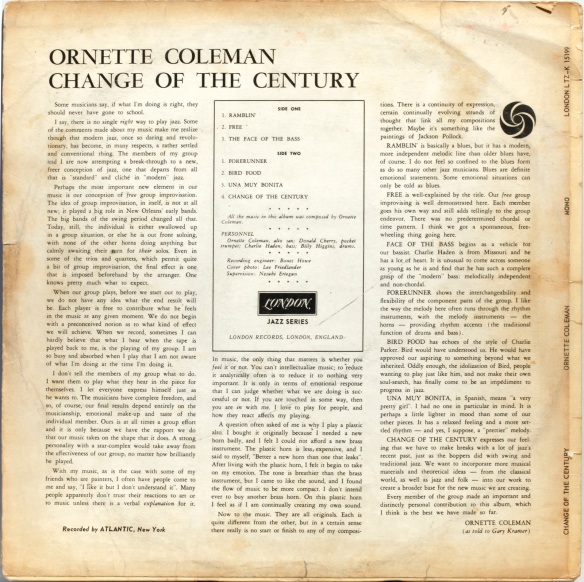 From the shelf of a central London store currently under threat of closure following notice of a 95% increase in their rent. Todays idea of commercial rents and selling vinyl at reasonable prices don’t mix, and when I called in earlier in the week, the shelves were  empty, as the proprietor had taken six large boxes of their jazz stock by car to a big record fair in Utrecht to offload it. It seemed unlikely that they would be able to afford to continue trading as a shop.

Soon, London’s high street will soon consist of nothing but chain stores, charity shops, branches of Poundland, and sellers of Olympics/Jubilee souvenir tat. It is almost there already. The commercial property investment industry have killed off almost everything of any individuality or specialist interest, and, after the battle, are now coming around on foot to shoot any remaining survivors.

At the time of recording in late 1959, The Century did not change for some time later, and not necessarily in a better direction. However in 1960, the decade changed, opening up many new possibilities, some great, some less so. Nothing stands still.