Track Selection 2. All the things you are

Described as a journeyman musician, Gonsalves played with Count Basie and Dizzy Gillespie before joining Ellington’s caravan. His extroverted saxophone style was solid, coming out of the Coleman Hawkins’ school of tenor players. Most famed for his jazz landmark seven minute solo in Ellington’s Diminuendo and Crescendo, which is worthy of a moments diversion:

“Paul Gonsalves played this particular saxophone solo with Duke Ellington’s orchestra at the American Jazz Festival in Newport, Rhode Island on July 7, 1956….It was somewhere around Gonsalves’ sixth steaming chorus that the crowd began to sense something special was occurring.. (at the seventh) most of the crowd (7,000 strong) was on their feet and cheering… Eight, twelve, fifteen muscular choruses and Gonsalves showed no signs of slowing down…Gonsalves boldly blew through a grand total of twenty-seven straight, groovin’ choruses… almost seven minutes worth of a saxophone solo that shook the world”

Phew, that must have been something! I have to say his contributions on Humming Bird are much more restrained. This albums for any British Jazz fans out there, as it comes across more British than it does American, despite Gonsalves origins. Elegant piano from Alan Branscombe and Stan Tracey, and elegant trumpet from Kenny Wheeler.

Simon Spillett, in “All about Jazz” imparts the inside knowledge surrounding Gonsalves and one Jack Sharpe:

“The recent very welcome batch of reissues contained an album I’ve long been searching for Hummingbird by Paul Gonsalves…. It’s every bit as good as I’d hoped, with superlative P.G. and a scene stealing trumpet solo from Ken Wheeler on Body and Soul which alone is worth the price of the album (and then some!)
However, the last track, a gorgeous tune by Tony Falkner called Almost You, caused my ears to prick up. Who is that taking the last tenor solo? Surely not Paul. The tone is clearer, the ideas less adventurous. Only when I looked at the credit for the original albums producer did I twig who the mystery tenor man was. None other than Jack Sharpe, putting down his cheque book and picking up his horn to repeat the cameo role he’d previously performed on another (still) ultra rare Gonsalves album Boom-Jackie-Boom-Chick which appeared on the “original” Vocalion label in 1963.”

Interesting use of inner sleeve colour and “hole” to indicate mono or stereo. Quaint 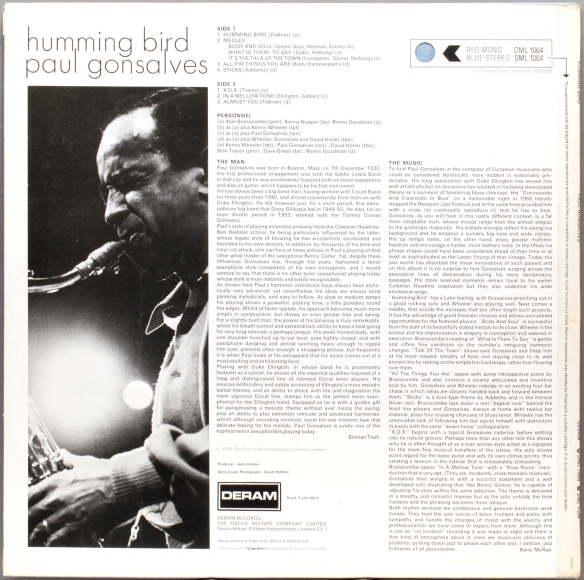 From the London suburbs, a record store whose record player was out-of-order, leaving me to ponder how deep pockets I had to chance a record I didn’t know of, other than the name Paul Gonsalves. His other records include titles that are so rare that if ever they appear, they cause deceased record collectors to rise up from their graves like Zombies, tapping in their eBay password with crumbling fingers for just one last bid. So we went with it.

Remember the collectors motto – See it, buy it. You never know if you will see it again.