Capture The Flag!! New competition! Which is better: British or American?

Head-to-head, a War of Independence Rematch, British versus US pressing.  The scientific test, a Bill Evans recording from 1966, the rather beautiful “A simple Matter of Conviction” on Verve. For reasons I will share later I have both a US and a UK original release of this recording. The American is Van Gelder mastered (machine stamp in run out) and in theory is the closest to the master tape and so should  see off any competition. I was surprised to see a Van Gelder stamp on a Verve – my first – but I read he worked for a range of labels, not just Blue Note and Prestige.

The UK release will have been mastered in the UK from a copy tape sent from the US. Conventional wisdom says the British pressing has no hope. It starts at a disadvantage being mastered from a copy of the original tape not the original. Worse, how can some backroom technical grunt in EMI engineering hold a candle to the sainted Rudy Van Gelder? It has to be game set and match for the American press. Theory is one thing, however evidence quite another.

Caveats: I am a hostage to my USB TT which I use for ripping vinyl to MP3. It is not greatest quality and possibly not capable of capturing the fine detail of each record. Equally, you will be hearing them both on PC speakers which may be incapable of replaying the fine detail. However the future of the Special Relationship hangs in the balance. This is a two hundred year overdue Grudge Match: Redcoats versus striped fancy-pants and we are still sore losers. Lets hear it for the plucky little guy.

Now back to the competition.I can tell you there are significant differences between the UK and US pressings, listening on a revealing hi-fi system. And one is clearly better than the other. But which? 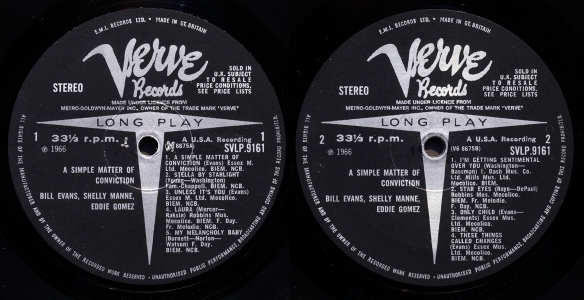 Economy British sleeve which is a modest flipback compared to the US gatefold.  I willingly concede the American artwork  is superior, it’s no contest.

US Gatefold: Lots of interesting writing on cover

The reason I have two copies is not one I am proud of, but there are some important lessons to learn which are worth more than the immediate vinyl in question.

Last year I was delighted to find an US original in a second-hand record store. Tragically it was damaged during handling. An inexplicable slip from the sleeve and it skated across the table to the floor, striking a chair back on the way, which left a noisy scuff in the thin vinyl. I was mortified – only the second time I have had an “accident” handling vinyl.

A few weeks back  I chanced on a UK pressing, a perfect opportunity to replace the damaged copy. No one need know! The replacement copy gave me an unexpected  unique opportunity to test the same recording A:B head to head between UK and US releases.I know the theory. Problem is theories are about what ought to happen, not what does happen. Everything known about vinyl quality says the American original should be a winner…here is a rare chance to put the theory to the test

One difference, on my listening, is the artistic judgement made by the engineer on the level of each instrument in the trio. The EMI mastering offers three independent musicians with Shelly Manne quite forward and given equal status to Evans piano. The Van Gelder is  strongly focussed on the piano with some rather subdued musicians supporting in the background. It is a Bill Evans record after all. That is perhaps personal taste in the mix.   Apart fom artistic differences, to my ear the British press has a brighter top end – cymbals sizzle deliciously – and the bass is more “tuneful”. But that is just my take, your mileage may vary, and your listening equipments certainly will.

This test has reminded me that theories are not necessarily always a good prognostic of results. Experience offers you a much better story. One reminder, as my mother used to say, there is often something good comes out of something  bad. Had I not scuffed the original press, I would not have pursued a replacement, and I would never have learned about the differences. Life never ceases to surprise and amaze.

The final lesson I learned is that thin vinyl with relatively shallow groove is extremely vulnerable to surface damage. I have 220gm Plastylite’s you could clog-dance on and it would not make a sound as the music is all buried in the deep groove. This featherweight Verve vinyl tanked just by looking hard at it..

About the competition, if you can’t hear any difference, just enjoy the music. Its great.