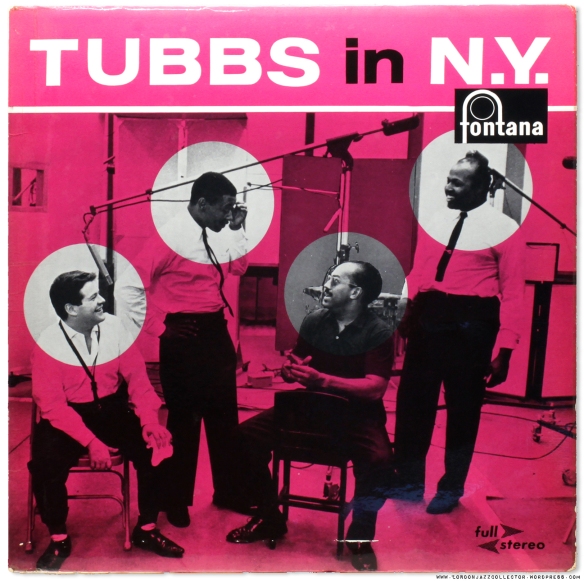 Tubby sticks it to The Master, on Rollin’s home ground of all places, his own composition Airegin. It’s a cheeky challenge, or a grudge match, but can Tubby pull it off?

Its Tubby-licious. In 1961 Tubby visits New York, shows a clean pair of heels to the competition. Makes a return visit the following year, with the imaginatively titled album “Tubby Hayes Return Visit“. It can’t be easy being a record company executive.

Tubby was world-class, deserves nothing more or less than an original pressing, which is what I had been chasing for a while. But you ask, surely, you already have a reissue of it. What’s the difference? Same music, isn’t it? Sample here the opening 30 seconds of You for Me. First up the late 60’s Wing reissue, in mono:

Second up, the same 30 seconds of You for Me, this time Fontana original from 1961, in “Full Stereo”

Stereo vs Mono issues aside, the 1961 Fontana is rich, spacious and airy. It is also a bit more crackly. The Later Wing reissue is nice, but a trifle flat and lacking the attention-grabbing dynamics of the Fontana, though fewer crackles, better cared for vinyl. Both incidentally pressed by Philips. Listening to the two samples captured on a USB turntable, the Wing mono may have the edge  Back to the story. Nothing however is always straightforward in the world of collecting records, as revealed in Collectors Corner

Fontana / Philips UK pressing (420)  not the same matrix as Wing

Does chasing Tubby carry a jinx? After a close encounter with a copy of Tubby’s Down in the Village that was fatally scratched in transit, I had been after an original copy of Tubbs in NY for some time.My original Wing budget issue isn’t good enough.  Earlier this year I was thrilled to win a tough auction battle for the Fontana original, however it never arrived. Instead an eBay MC015 notice arrived. If you have not received one of these before you are fortunate. It means the seller has been identified as a fraudster, has run off with your money and is being kicked out of eBay… 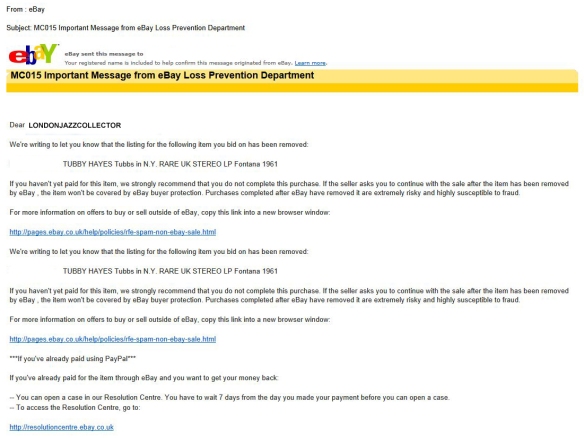 Onward and upward, LJC is not so easily deterred! By chance another copy appeared a month ago, from what I judged a rather eccentric seller. Judge for yourself from his description

“A few hundred pounds” is perhaps a slight exaggeration,and  modern microgroove records are “unbreakable” It says so on the label. The sellers description was so forbidding he failed to attract any bids first time around and he was forced to relist it. After exchange of email, which only confirmed his slight eccentricity, it was clear “normal UK postage” would be available rather than “freight”, which was how it was listed. Only one other bidder was not put off, but it was to be mine. I deserve  it. . Paying however was not an option – for listings allocated to “freight”  eBay helpfully suggests you “contact seller, who will calculate freight charges” Thats a new one. Freight train, freight train, going so fast…all the way from Scotland.

We finally agreed a freight charge less than half his original estimate, otherwise known as “postage”

A long wait, and finally, a huge lime green parcel arrived on the doorstep. Great fun at parties! Jelly, ice cream, and a game of Pass The Parcel. When the music stops, unwrap a layer, when it starts again, pass to your right...

Despite explaining the need simply for flat rigid cardboard, seller was determined to protect against very eventuality. Mountains of bubble wrap, lashings of cardboard, and extra weather sealing courtesy of Morrison’s supermarket. It was certainly fun to unwrap, in complete contrast to the chap who posted me a record into a soft brown envelope with no protection at all. But may be “freight” wasn’t far wrong.

Finally I own the Fontana original. He may not have played it for thirty years, but he didn’t handle it very well when he did. Perhaps he forgot.It has indeed  been an adventure, chasing The Tubbs. And they think it’s just about throwing money at eBay..