Selection 2: With a Song in my Heart

Selection 3: This Love of Mine

Sonny Rollins in session with MJQ for four tracks of the album, thirteen tracks with other musicians the rest. Sessions from 1951 and 1953, so it’s a young Rollins, with marvelous fluidity. In keeping with the times, tracks little more than two to three minutes each, so a good selection. Interesting to hear Miles Davis sitting in on piano on the selection “Know”. Count Basie on triangle, anyone?

Vinyl: Esquire 32-035 UK release of Prestige 7029.
By a strange coincidence,  an auction of the original Prestige of Rollins/MJQ  closed on UK eBay this week at £174, wrongly identified by Prestige on the front cover as 7020 and not its correct catalogue number 7029

A US copy selling around the same price spotted what the Cornish seller had not. Prestige made the typo (and look at the eyewatering price from Goldmine!)

At £22, my Esquire seems a bit on the cheeky side, but then it doesn’t have that yummy orange Prestige cover with the wrong number on it. However the music is the same, and possibly almost as rare. The original Prestige is a far nicer cover than the Esquire drawn by Harry Peck, which outline bears a remarkable similarity to the Prestige photo of Rollins. Looks like a tracing paper job. 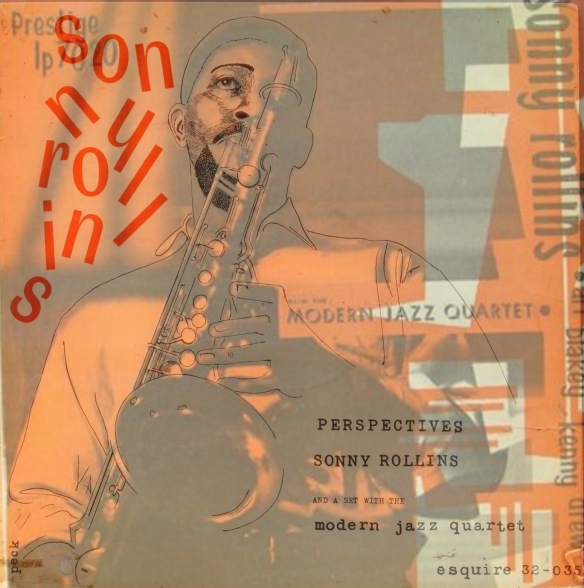 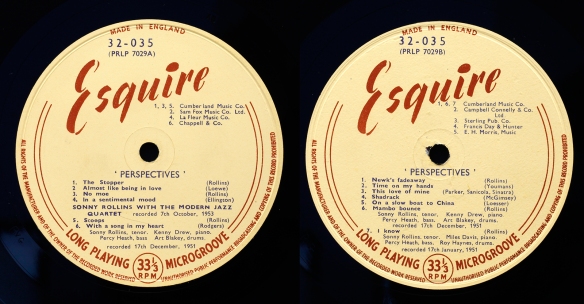 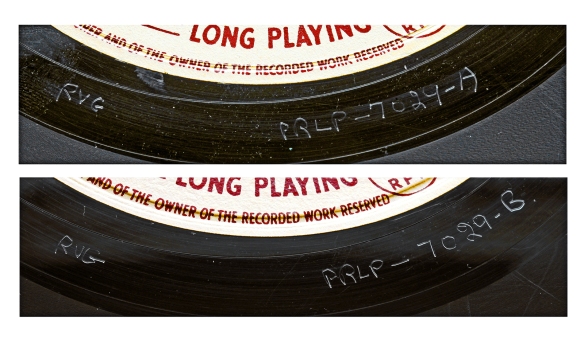 Ouch, this one is grubby! This is where I go into Benedict Cucumber-patch’s Sherlock mode.

“Dr Watson, from the circular pattern, this Esquire LP had at one time served as a house plant pot stand. Occasionally the owner watered the plant, in all probability a variegated cultivar of Sansevieria trifasciata to judge from the infrequency of watering marks.  Compost drained through the roots and out over the LP cover, leaving the blackish residue you see radiating outwards. Exposure to sunlight on only the outer edges confirms it was located in probably in the Central London area, possibly, Baker Street area, 221B to be precise,  owned by a pipe smoking detective. Yes it’s mine, Dr Watson, an unwanted Christmas gift from Mrs Hudson. I never did like the Modern Jazz Quartet. Now fetch me my violin. I feel a sonata coming on” 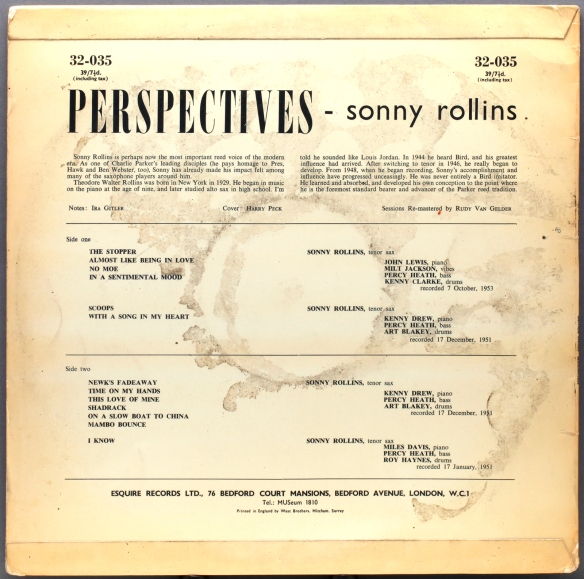 The third of three Esquires from the same collection, and the worst of the three as regards covers, but then it’s not a very nice cover anyway, so there is  little to be gained by crying over spilled milk that had already gone off.