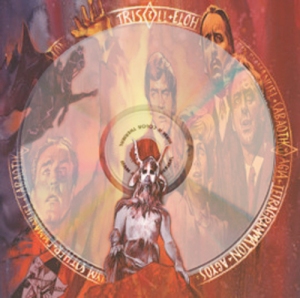 This post is addressed to followers of the Less Evil Black Disc.

Followers of its evil twin, the silver disc, (pictured)  may find this a good moment to don their satanic robes and prepare a little human sacrifice to placate The Silver One. He is angry with the Black Disc. Very angry. He is jealous of its faithful reproduction of sound. If there is one thing The Silver One can not stand, it is faithfulness. High inFidelity.

For some time now I have been feeling things weren’t quite right in the vinyl area. Lots of bass, too much bass if anything, soft and not properly controlled, leaching power at the expense of the mid-range and resulting in a  lack bite in the top end. This unease was heightened by switching over to the streamer and finding digital sometimes having the edge, confirming the vinyl source was the issue, as they are both fed with the same conditioned power, and pass through the same amplification. Something urgently needed to be done to restore wavering faith in the black disc.

A visit to the National Hi Fi Show at Attlebury Hall Milton Keynes stimulated a number of possibilities, and two particular  improvements have had a hugely beneficial effect, which will be the subject of a future post. While installing these improvements, however, an unexpected adjustment transformed the performance of the system, at no cost at all whatsoever.

I don’t like fiddling with turntables, but luckily a friend, who was probably born with a stylus gauge in one hand and a soldering iron in the other, came to the rescue. Gee, Analogue Man, you have saved the day. The turntable arm adjustment is called VTA, or Vertical Tracking Adjustment. The very  words make me flinch, that when “adjusting” a delicate piece of equipment you will break something, make it sound irrecoverably worse, and that you are going to have to sit and listen to different degrees of adjustment and decide which sounds best, and risk mistakes. I am, you note,  a recovering pessimist.

In less than 15 minutes, the effect of adjusting, refining the adjustment, and eventually locating the “sweet spot” in VTA – just a turn of the adjuster, listen, turn a little more, listen, turn again etc – completely transformed the performance of the system. The stereo sound stage snapped into focus, the troubling bass lifted, harshness was replaced by sweetness, an extraordinary and unexpected experience.

VTA: The Technical Stuff, in pictures 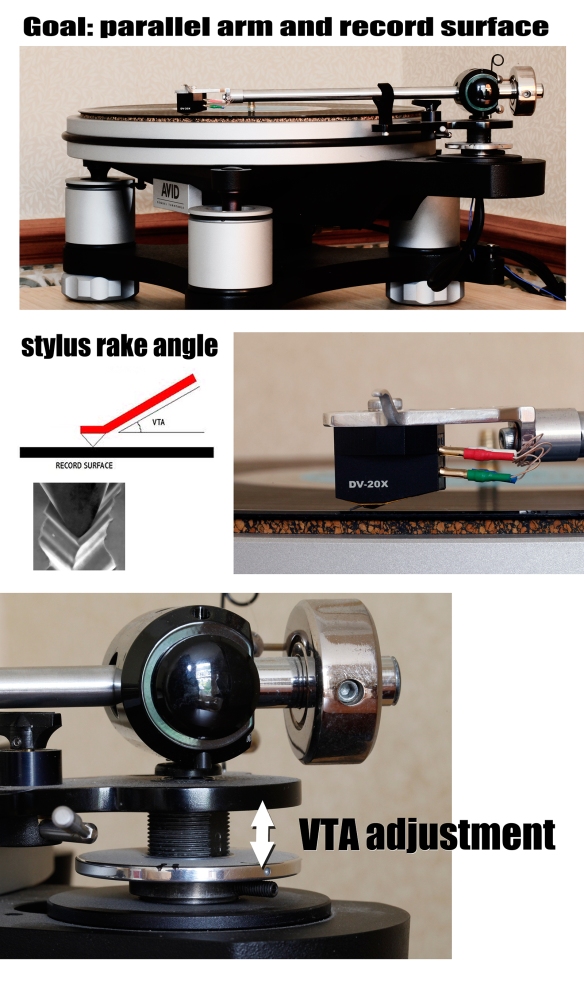 The adjustment wheel on an Origin Live Encounter tonearm. Most good quality tonearms will have some sort of equivalent method of adjustment. It turns to raise or lower the tonearm, and holds a grub screw to tighten on the final position.

Achieving the correct angle by adjusting the height of the tonearm  is critical to achieving accurate groove tracking. Altering the arm height is carried out by rotating the helical screw disc up or down – which alters the angle that the stylus makes relative to the surface of the disc, and thus how well that line-contact stylus matches the ridges cut by the original lathe onto the groove wall.

The stylus will ride perfectly in the groove when the arm is perfectly horizontal and parallel to the record surface. Starting with a spirit level and rough-tuning up and down to achieve a fairly level tonearm position, it is then necessary to fine tune the adjustment to locate the very small range in which the “sweet spot” is found. In this case, trial and error found less than a quarter turn of the adjuster identified the huge step change in soundstage and tonal balance as it springs into or out of focus. You have to find that sweet spot!

Just in case you were thinking LJC was off his medication with this sweet spot business, an audio engineer walks you through the principles and metrics here, extract below:

Assuming the (VPI) tonearm to have a 300mm effective length, to get a one degree change of Stylus Rake Angle we need to alter arm height by 5.23mm. A 1.0mm change in arm height changes SRA by 0.19 degrees. The VPI’s VTA adjuster clicks equate to 0.35 thousandths of an inch according to Mr Gregory. That translates to less than one hundredth of a mm. He says that changes of +/-2 clicks produce a “vital” change in sound quality. So once you’ve found that sweet-spot a change of 0.018 mm (2×0.0091) will lose that perfect reproduction. Now just to drive that point home that 0.018 mm equates to a 0.00342 degree change in stylus rake: around  three thousandths of one degree!

Very small adjustments create very large changes. There should be nothing surprising about that, though it was, as the whole business of hi fi is about massive amplification of microscopically tiny signals. A discernible change in pitch is created by movement in the vinyl wall one thousandth of the thickness of a human hair, detected by the stylus sitting in the groove. The angle of the stylus tip determines how much of its surface area makes full contact with the groove wall. As they say, simples. Compare the sound.

There are audiophiles who in all seriousness say they can not hear any change resulting from VTA adjustment. For them, with their equipment, and their ears, that is the truth, I have no reason to doubt it.  My experience has been of massive change – my equipment, my ears. And I reckon it’s adjustment has been “off” for a very long time, I have no idea why. At the other extreme there are adjustment-addicts who say that you should adjust the VTA individually for every record, to account for changes in vinyl thickness. And they are probably right, though that way madness lies.

The improvement in sound has been most noticeable for stereo records. The soundstage has really come alive, and the tonal range sweetly harmonious. That is very good news for the hundred Japanese pressings in the LJC collection.Already I am rediscovering and enjoying my Kings and Toshibas in a new way. So much so, I’ve ordered four more.

The other main benefit has been the significant reduction in vinyl surface noise since finding the VTA sweet spot. There is probably some science behind that too, but the effect is most welcome, whatever the explanation.

None, and no cost, it’s all good – though the Evil Silver Disk now sounds pretty weak in comparison. Sorry fellas, more sacrifice needed…