A track whose first US  appearance is on the Division of Liberty release “Roots and Herbs” (BST 84347), taken from  Jazz Messengers sessions back in 1961. Tracks from this album also appear as “bonus tracks ” on those superficially seductive but ultimately evil shiny discs.

Arguably Blakey’s best line up with both Wayne Shorter and Lee Morgan. Recorded during various 1961 sessions and parked in the vaults by Blue Note for another decade. Possibly caught in the log-jam of Blakeys prolific output that year – The Freedom Rider, Mosaic, Buhaina’s Delight , as well as tours of Europe and Japan, busy busy. Blue Note always mindful to avoid saturating  interest with too many releases from one artist –  a rule which unfortunately didn’t appear to apply to one Jimmy Smith.

If the cover doesn’t altogether succeed, the audio certainly does. A  superb transfer by King Japan (1979) of very lively tapes, with RVG on top form, and well-balanced stereo, a very satisfying listen some notches above the average Japanese pressing, which is already pretty good. Collectors of Blue Note original artefacts can sneer, but it is the sound that matters most . (Sneers from collectors –  Rubbish! You audiophiles are all the same! It’s the cover that matters most!! Covers without any writing on them!!!  Fights break out between collectors. Music! whack Covers! thump Music! biff Covers!!…)

Not the finest in cover photography – gimmicky solarisation or posterisation in the world before Photoshop, and not the most flattering profile of Blakey. The point of this music is not so much Blakey as The Messengers, the high priests of Bop. Perhaps everyone at the time knew this.

Matrix: Just for the record, what is found in the run out of a King Japan pressing. It shouts disciplined, orderly production routines, totally professional, hallmarks of Japanese culture. No crossing out,  A and B sides reversed, or initials. 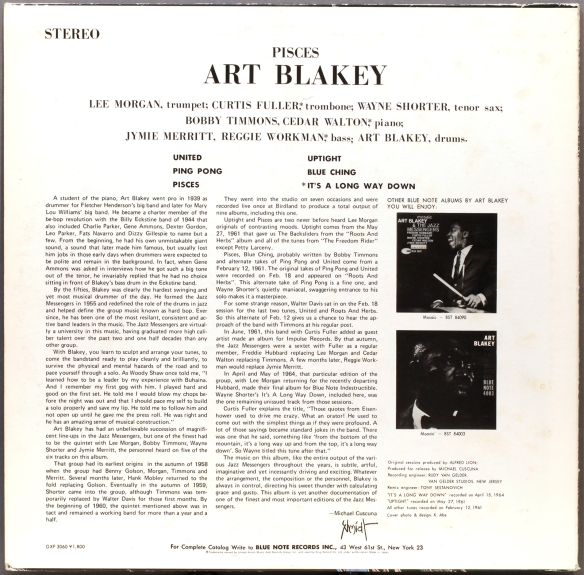 Raise a glass to record collector Schmidt, whose distinctive “signature” is carried on a good number of records circulating in the UK and in LJC’s collection. Where some collectors were highly fastidious, only records in perfect condition, Schmidt trod the more difficult path on the borderline between acceptable and affordable and not acceptable.  When you see his mark, you know there will be a few unpleasant looking spindle skate marks (that don’t sound) , the wrong label on one side, a missing ear sometimes, a bit of crackle, some compromise here or there, but they will always be basically sound and eminently collectible: champagne on a budget, and I’ll drink to that.

If money is no object, and you can afford to buy the best, good luck to you, I hope you find your  happiness, but I expect you will have a bumpy ride like everyone else. I am reminded of the Japanese collector who shelled out $5,000 for Mobley 1568, only to send it back in tears because it wasn’t “perfect”. Often, perfection doesn’t exist except in the mind. At the other end of the value spectrum are cheapskates – those who pride themselves on how little they spent.

Somewhere between the two extremes, the rest of us are trying to strike our own personal compromise. It’s messy, you don’t always get it right, but you learn as you go along, and by and large you make incremental progress towards greater personal happiness, bearing in mind it can be bumpy too. Aspire to better. Compromise can be the ticket to enter the next level. Follow the footsteps of collector Schmidt. I think he had the right idea.