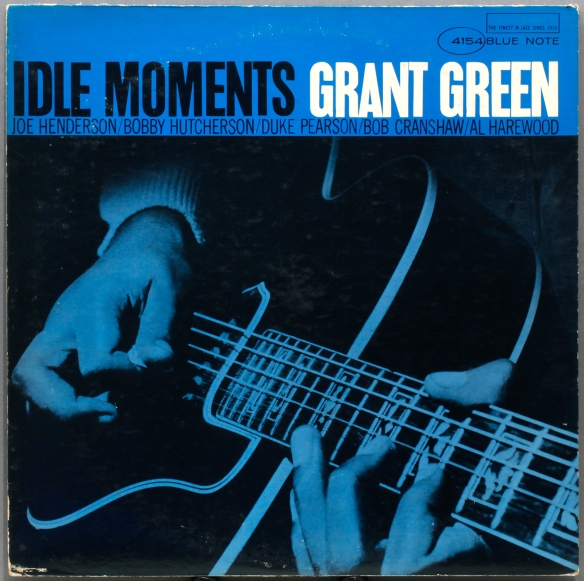 Record previously posted 31st March 2012 in stereo version here, with 14 minutes of the title track, which I won’t duplicate. Instead, the John Lewis composition “Django”

It is as much a Henderson or a Hutcherson album, even a Pearson album, and it stands apart among other Grant Green titles, very different from some of the guitar-organ-drums titles.

Everyone has favourites. With some people its Miles’ Kind of Blue, for others its Coltrane’s Giant Steps,  everyone has their own personal favourite most wanted record, the one you would choose to take with you to your desert island, for me it’s Grant Green’s Idle Moments, primarily by reason of its 14 minute title track, in which the solos from Green, Henderson, Hutcherson and Pearson are non-pareil.

Starting with reissues and audiophile press, the original Blue Note Stereo copy I finally won on Ebay at great expense was found to have a needlestick a couple of minutes into the title track. See it close up, so you can share my pain. When I blogged this previously posters offered some well-meaning advice on vinyl repair, thank you,  but a heavyweight radiogram arm had gouged through over ten grooves.

I figured I just had to keep going to find a top copy for myself. Each time I chased one the price went through the roof. I was not alone in wanting it the nearest thing on record to “time suspended in space”. However what goes around comes around, and virtue receives its just reward, just as a six-eye Kind of Blue “popped up”, so finally has my most wanted Blue Note, BLP 4151. 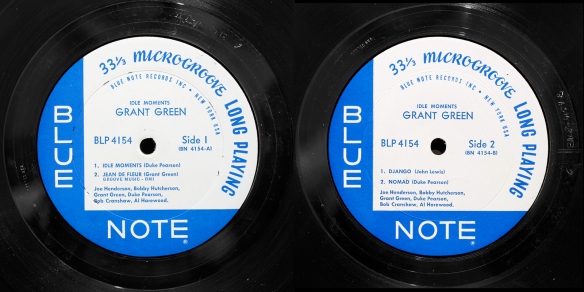 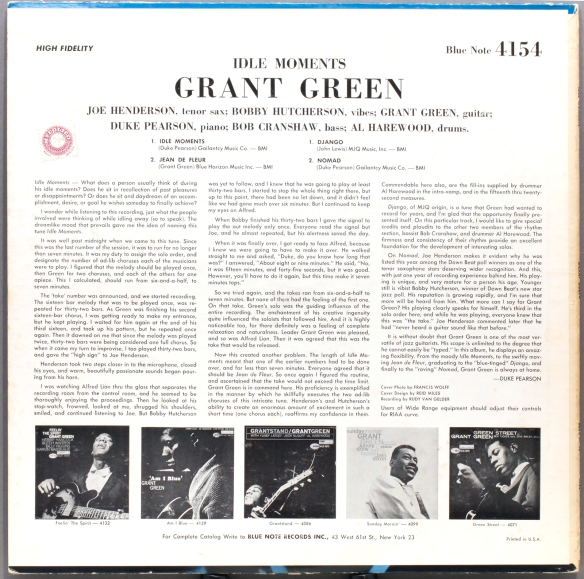 The light oak wood panel flooring is in Very Good condition, a few light scuffs from high heels which do not affect walking. Could benefit from a good polish.

I made the last bit up. It was from a lady seller, who I thought might appreciate a little feedback on her floor covering, which features rather prominently in the item for sale  photos.

Yeah, it’s a record. Every 12″ LP record is more or less the same in the vinyl department: it’s round and black. What differs is the label and 85% of the right hand picture offers little useful information as to what is on the label. What could have been useful is the year of the inner sleeve to confirm its status as an early pressing, but no, that’s obscured by the large black plastic disc, which confirms it’s a record and not a cuckoo clock.

Can we talk money for a moment?

It can be vulgar to talk money but with records, you can’t always avoid it. Ebay is a buying and selling market, records have a value, some have more value than others, buyers have to put money in for the market to work, how much depends how much they want the record, which is why it is interesting. Some collectors are motivated by scarcity, others by a search for quality, by nostalgia, by an collecting-impulse, for trophy hunting, by thrill of the chase, the pleasure of ownership the original artefact, a financial investment, a thousand other possible reasons. Money is merely a servant of these acquisitive impulses that have deeper rooted origins.

A near-mint mono BLP4154 fetches anything up to $1,000 – as usual Popsike statistics are skewed by the number of inexpensive  VG minus, Liberty, Japanese, and so-called “audiophile” copies. Apart from the odd lucky shot, top quality originals fall in the upper end of the price range. 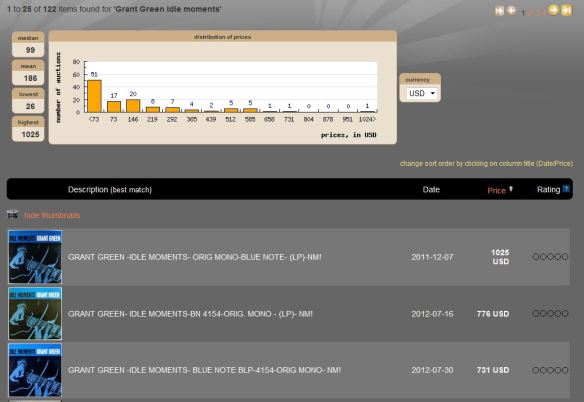 These mint copies are way way over my house limit, but it is a quandary when something most-wanted shows up.  If you are stinking rich,  just put in any number you like. Three is a nice number, so is seven. Then add as many noughts as you like. Someone else more sensible than you will set the final price but you will win.

Personally I need a more “rational” approach by which I can arrive at and justify spending a stupid sum of money on the less-evil black plastic disc . I know this is just a BS mind-game but I sleep better for it. Start with your house limit. If you don’t have a house limit, make one up – it is the figure at which you would sensibly walk away, everyone should have one. Then add a premium on top because it is one of your “most wanted” records. Then add just a teensy bit more – you wouldn’t want to lose for a lousy five bucks. Then toss in another chunk on top of the lot. This is a killer karate mind-move – the  “so what” factor: once in a while you pay “too much”, so friggin’ what?

Now comes  the clever bit: financing the bid. Simply cancel all the other bids currently sitting on other records in the next week, to fund this one. See? Easy. It’s amazing how much you can save by not buying things.  Women do it  all the time, with shoes. Darling, I saved nearly £300 on a lovely  pair of Jimmy Choo’s I saw today. I decided not to buy them. What I saved I put instead towards these three pairs in their sale.  No Fiscal Cliff problem for these ladies,  they just leap over to the other side.

Already my bid was looking viable, if a little eye-watering. . Now if you lose, it is not your fault, you have done everything you could reasonably have done. What in Californian personal growth teaching they call  rapprochement  – “the simultaneous capacity for both inner regulation and external functioning” .Psychobabble, but it works for me. (careful, I have read the core works of NLP, have five volumes by Bandler and Grinder on my bookshelf)

Snipe set, I promptly forgot about it, waiting for my mailbox to bring the good or bad news. Six days later, the news finally arrived. Not only was it good news, it was very very good news. apparently, not only had I won the record, but I had also just saved myself a fortune. Theoretically, at least, as the final price was less than half of my bid. Taking a leaf from the ladies, I seized this hypothetical “saving” and promptly reinvested the windfall in a couple more bids. You have to speculate to accumulate in this collecting game.