Bonus: listen to one, get to listen to another  one free: Amanda (STEREO)

The formidable line up – Donald Byrd, Joe Henderson, James Spaulding,  tells you this is no ordinary  “piano album”. This is Duke Pearson, the composer, arranger and piano player with three of New York’s finest horn players of the mid-Sixties in the front line. Four of the five tracks are Pearson compositions and the fifth from Byrd, not a standard in sight.

Befitting a composer/pianist, his style is lyrical – those sweeping arpeggios in Idle Moments come to mind – and his compositions are featured in many of Donald Byrd’s albums.He knows he is not a Monk or Evans, he envisions the piece, and adds musicians as ingredients to fulfil the recipe, chosen for their texture or degree of heat. He has picked up on eastern themes, on modal style,and the chordal vamp supplements the rhythmic percussive beat.

Pearson went on briefly to be Producer and Director in place of Alfred Lion at Blue Note under Liberty, along side Francis Wolff, until United Artists came on the scene. Blue Note was not dead, though it never recovered its stride, but there was still much good creative output in those few Liberty years, on Pearson’s watch.

“Classic Blue Note session – another extremely hard to find 4000 series LP – Highly sought-after by modal jazz fans  for Amanda, Bedouin, etc!” So says one eBay seller. This is a Liberty reissue, so not quite as hard to find, but staying on the lookout for an upgrade to the real thing.

For shame, not the 1st NY label/ ear/VAN GELDER  edition from 1965, but a close run thing, a second pressing a year or so later by Liberty. What’s a year? Or even two? Or possibly even three? Stop being so fussy.The record goes to the Forensic Lab for tests.

No VAN GELDER stamp. With the Van Gelder master still warm, Liberty paid for and own everything, someone at Liberty ships a copy tape of the Van Gelder recording off to a plant as a custom client and the plant cuts a fresh master, hence no VAN GELDER runout stamp (unlike almost all Liberty which have the stamp).

The label printing is also third-party sourced, no circle around the R of the registered trademark. There were only around a half-dozen specialist printing companies in the country that printed record labels and this was not from Blue Note’s classic supplier.

The cover is a fresh Liberty print-run., with the tiny Liberty logo and catalogue number in a small  font, and no NY address.The vinyl weight, at 138 gm, is at the low-end of the scale, but thankfully there is no sign of the dreaded ” Entertainment from Transamerica” logo.

As a result of all this, I can confidently date this copy as late 1967. That’s what Goldmine says too, but not why.  What other blog gives you this huge amount of  forensic depth? Who on earth would want it?

Labels: bare but for the catalogue number, written in  small precise hand. I bet a graphology analysis would find only a small number of individuals … by their  handwriting style … mastered these records. Possibly?

Source: London second-hand record store three or so years ago.. 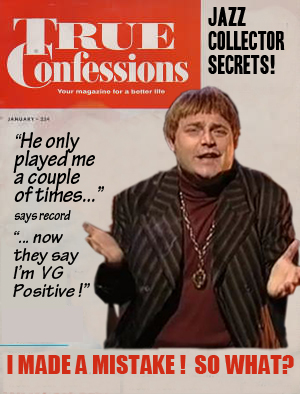 Pearson’s Wahoo has sat neglected in my collection for several years, having  being played just a couple of times after purchase,when I decided that it wasn’t much to my taste.

During a re-evaluation of my Division of Liberty label, all fifty-odd Liberty records were pulled from the shelves, and several dropped onto the turntable for a second opinion.

My, how wrong could I have been? It’s great. I was probably looking for something else at the time, and hadn’t quite attuned the ear to the more modal style.

So many great discoveries are probably already sitting on your shelves at home. It’s something of a cracked record here at LJC, but memory is an unreliable friend. He tells you “you don’t like this”, when what he means is at “one time, you didn’t like this”. Not the same thing at all. The only way to know what you think of it now is to play it now. I lot happens to your musical appreciation over two to three years. Time to pull the rest of the Duke Pearson’s from the collection and take them for a spin. Nothing to lose, and potentially plenty to gain.