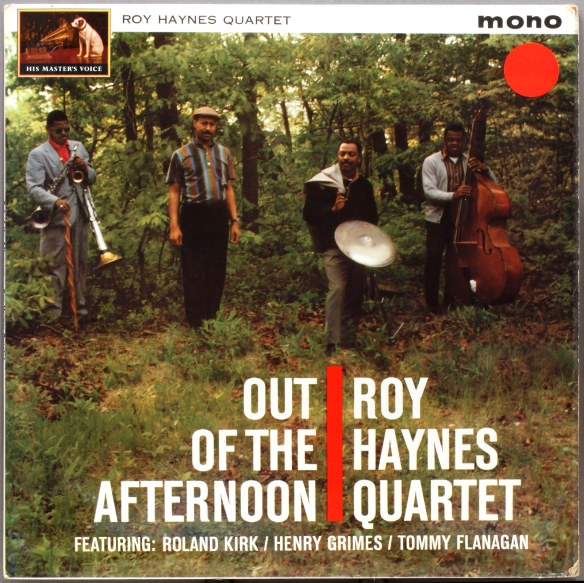 “.. that ‘Shulie a Bop’ with Sarah Vaughan  , which was in 1954 – where she introduces the trio in the song (Youtube at 1:28secs) and just before she says my name I say, “Bap!” And she says “Roy!” I say “Bap-bap-bap!” “Haynes!”   Snap Crackle’ – other musicians called me that, and I always thought it’d be a good song title, and I decided to do an introduction like ‘Shulie a Bop.’ That’s Tommy saying ‘Roy!’ and ‘Haynes!’ We tried it first with Rahsaan, but for some reason he was sort of spaced,”

LJC says: Snap Crackle features the hyper-energized, prodding-and-stabbing drumming on smaller, high-pitched drums that gave Haynes his nickname. He begins with brief 16th-note calls and responses, followed by 6 or 7 measures of offbeat 8th-note melodic patterns. He then begins the same process over again, this time extending the 16th-note runs for 10 measures, and the subsequent offbeat 8th-note runs for 12 or so.

Selection 2: If I should Lose You

“Out of the Afternoon (1962) was a one-off album for Impulse inspired by some club jamming. “During that period I was playing at the Five Spot a lot. Rahsaan had recently come from Ohio or Chicago or someplace, and he had his own group on the same bill, and we were jamming a little. Henry worked with me quite a bit then and Tommy too. Those guys were kicking butt! We got excited about the idea of doing something together, so I took it to Bob Thiele, and we did it. Rudy Van Gelder is a big part of that album as well; he got that great drum sound at his studio in New Jersey.”

In a field of readily identifiable sub-genres of  jazz, Afternoon is hard album to classify. It is too cool to be mainstream bop, but too melodic to be angular post-bop. Flanagan is a strongly melodic player while Haynes virtuosity lifts percussion out from the rhythm section role, which is left largely to Grimes. But the real confounding factor is Roland Kirk.

The inclusion of Kirk on this album is an inspired choice and from the start his presence on the cover photo is magnetic. Taken, at a guess, in the leafy grounds of the Van Gelder Englewood Cliffs studios, everyone dutifully looks to camera except the sightless Kirk, for whom the gesture would be entirely meaningless. There is a sense of anticipation in every track, especially the thought “What the hell is Kirk going to play on this one?” And through which orifice? According to the liner notes, at one point Kirk has two horns on the go , while growling the tune, with a flute in his nose. He manages to form chords simultaneously out of the different instruments, then veers off in solo runs, at times funky at others straight blowing, then experimental, but always part of the ensemble. Sheer  genius. Unique.

Haynes is the drummer’s drummer. Mingus lauded his ability to suggest rather than state the beat. He will play over the time signature, like it’s free, but underneath the beat is steady as a rock. Often the tempo is to be found in the cymbals, with crisp accents and rapid fire on the snare. He is also one of the few drummers who can “play the melody”, insinuating the tune. Haynes played with the giants –  Bird, Miles, Monk and Coltrane, always chameleon-like, fitting in. This album, consisting of half standards and half original compositions,  established sideman Haynes, at the ripe old age of 36,  as leader, composer and conductor, and it truly smokes. Having probably inhaled enough jazz-club cigarette smoke to have his lungs declared a national nicotine resource centre, Haynes was still recording in his late Sixties, and is still going strong at the age now of 87. The celestial quartet continue to drum their fingers patiently awaiting the arrival of the new percussionist.

Though recorded by Van Gelder, the UK release is remastered by EMI from tape, hence no Van Gelder stamp. However EMI are no slackers, and these HMV Impulse pressings are reliably a joy, especially when compared with ABC Impulse’s own later reissues, which a generally awful. The HMV Impulse roster include all the marvelous Coltrane Impulse releases for their first UK release, for which I for one am truly grateful.

The pressing is mono and sounds all the better for the recent addition of the Man-in-a-Shed external mono switch. Nevertheless Impulse stereos are highly sought after and I am aware have their fans as preferred format. I’ll happily sit on the fence . Mono or Stereo, with this music, how can you lose?

The cover is identical  to the US Impulse, apart from the large red dot which obscures what was obviously the presence of the Impulse logo, and the addition of our own friendly music jazz-loving puppy “Nipper” in the  HMV logo. 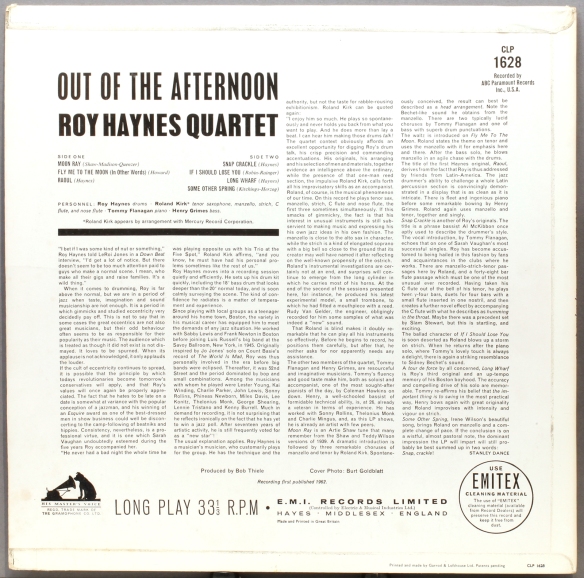 Source: One of thirty or so records recently purchased from the private collection of the late Brian Clark. Brian was a founder and leading light of the Lenco Heaven forum, who wrote under the name “Monoman” and had a passion for the drums. His Mono section at Lenco Heaven contains an extraordinary depth of knowledge on mono/ early Stereo which shows up the shallowness up my own recent foray into the subject.

He was an advocate of the corner horn, a form of classic hi-fi speaker I wasn’t familiar with, nor the ersatz description of my own Linn 242’s as “Monkey Coffins“. “When space is at a premium a corner horn is the most practical way to go. So much more successful than bookshelf speakers or monkey coffins on sticks – which take up a surprising amount of room”

To judge from his collection, Brian was a  jazz lover with impeccable taste who had accumulated some very interesting titles. I was fortunate enough to have an opportunity to view the collection before it was sold in its entirety for the benefit of the family to another private collector (minus my own small parcel, thanks, Bill and Marc).

Some records from the collection will make a hopefully lasting tribute to Brian’s memory here on LJC, starting with Roy Haynes’ Out of the Afternoon, a record I had never seen until now. But very glad I have.