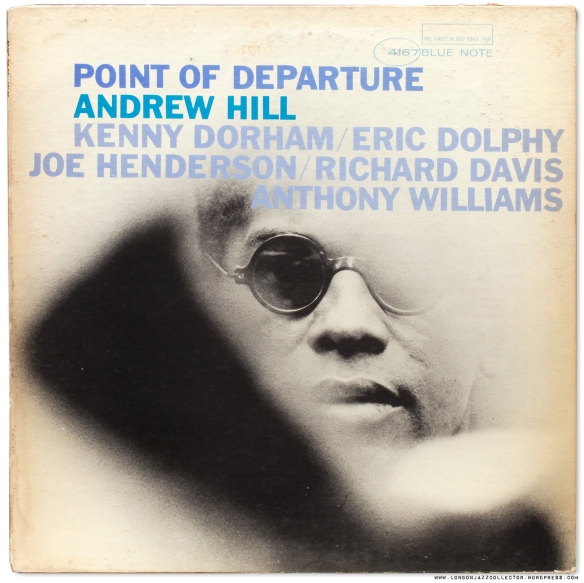 If you are an avant-garde pianist, the “elephant in the room” is Monk. Hill pays tribute, in his own way.

A poignant piece under an ambivalent title, a simmering, towering, emotional work.  The funeral march has a powerful place in music and Hill has written a powerful memorial piece in the modern jazz idiom. Something to play sometimes as the mood takes you, when you crave more than just musical sunshine, darker, more light and shadow.

Alfred Lion, Blue Note’s co-founder, called Hill his last great discovery, and between 1963 and 65 Hill’s star was in the ascendant with these adventurous “post bop” Blue Note recordings, some of which had to wait several years for final release during the Liberty and United Artists years, and some more recent still.

LJC-embellished on his Wiki: Hill’s playing is to be savoured for its rhythmic and harmonic complexity, as he sought to advance while remaining grounded in the traditions of Powell and Monk.  As a result some considered him to be a cusp figure: too “out” to be “in,” but too “in” to be “out.” (Sounds a good place to be, to me). As a pianist, his style is marked by extreme chromaticism, complex, dense chords, flowing, legato phrasing, and frequent rubato. He would often play against the rhythmic pulse, or move into different time signatures, Throughout, his skill as both composer and leader can be sensed as his musicians venture into unknown territory while still remaining precise and controlled. (Note to self: legato, rubato, rubadubdub, I must learn some of this music-speak, sounds essential to impress guests at diner parties. In case I ever get invited to one.)

Hill doesn’t seem to attract fanatical following like Bill Evans, but I think he is equally worthy of attention, deserving of active extended  listening.

“Tempo Rubato (literally, ‘stolen time’) is a potent factor in musical oratory, and every interpreter should be able to use it skillfully and judiciously, as it emphasizes the expression, introduces variety, infuses life into mechanical execution. It softens the sharpness of lines, blunts the structural angles without ruining them, because its action is not destructive: it intensifies, subtilizes, idealizes the rhythm. It converts energy into languor, crispness into elasticity, steadiness into capriciousness. It gives music, already possessed of the metric and rhythmic accents, a third accent, emotional, individual…”

“Legato (‘tied together’) indicates that musical notes are played or sung smoothly and connected, that is, the player transitions from note to note with no intervening silence.”

Vinyl:  BLP 4167 NY, no DG, VAN GELDER, ear, original pressing (fingers crossed, Cohen-owners do your worst) Stamped DJ COPY on the back sleeve, which is a good sign that usually signifies an early pressing promo with characteristic freshness of sound, played only once by its first owner on a well maintained turntable, maybe then archived for some years out of harms way. Or alternatively, it was previously owned by the notorious scratching hip hop MC  D.J. Copy

I had been after a nice clean copy of this record for several years, without success.  A chance conversation with a staff member in a record shop opened up the possibility of a private sale of some very sought after Blue Notes he was looking to dispose of from his personal collection.

A meeting was agreed, at which he would bring along the selected titles for my inspection, whilst I would bring along a collection of small watermarked engravings of Her Majesty Queen Elizabeth II, known to collectors as “record vouchers” (pictured, right)

The day of the rendezvous arrived and I duly turned up at the agreed time, as did the seller with records under arm, commencing with the apology that he had been unable to locate some of the titles he had spoken of due to his filing system, known as random piles. But he had brought some others which may be of interest. Point of Departure stood out as the gem in a sea of funky soul-jazz items that were clearly more the sellers taste. The Hill seemed strangely out-of-place.

A quick sift determined this (and a Japanese press of Babyface Wilette) would be the transaction. Moment of truth, I asked, how much do you want for it? Deer frozen in the headlights. A minute’s silence turned into two, then three, as he struggled to reconcile the  irreconcilable – what he wanted, what it was worth, how much he thought I would pay, and how badly he needed the money running up to Christmas. I was having difficulty in getting him to speak, eyeballs swivling like a Blade Runner replicant experiencing an internal short-circuit.

In a situation like this someone needs to flush out expectations – float a figure to get the ball rolling. Sellers will sometimes pluck an example from Popsike (for a mint autographed pressing, of course) to set an upper marker while I sneer at the record faults, explain how little it is worth to me. Neither extreme is right but it begins to shape the important middle ground. But nothing was happening . Eventually I broke the silence with an offer. ” I’d be happy with… ” suggesting a generous (to me)  figure. That seemed to galvanize him into action,

He countered, adding another record voucher to my proposal. I responded – including the Wilette? No, add a bit more for the two. Match point. We were almost there. The artful buyer at this point takes out his wallet and starts counting out cash, only to discover they are a voucher short, probing for any weakness in the sellers position. Kindly soul that I am, I sealed it with a final offer, based on the tried and tested principle of rounding. No one wants to be seen as quibbling over a couple of pounds (though it sometimes happens). “Fair enough, done”

I was very happy to take home a much-wanted original Blue Note in excellent condition at a fair price, no postage or customs hazard, no  risk of seller misrepresentation, none of the usual anxiety that goes with distance buying and selling. I expect he was very happy to go home with  a nice set of engravings of Queen Elizabeth II.