Beautiful tune, tranquil and perfectly paced, Tyner does what he does best –  an exploration of the strong melody for its rhythmic and harmonic potential, punctuated with cascading rippling arpeggios; on cue, Henderson floats in, flying, darting, only to subside as peace is restored. A simple but satisfying musical narrative: ultimately, we all need Peace.

Selection 2: Blues on the Corner (Tyner)

A strutting bluesy swinger from Tyner, Elvin Jones  punishing those cymbals, they must have been very very naughty. A good track for when you have just about had it with all that limp-wristed Peace stuff, and need something a little more… aggressive.

Tyner first appeared on the scene in 1960 with the Golson/ Farmer Jazztet, moving to the John Coltrane Quartet for most of the early sixties up to 1965, when Coltrane  was becoming more atonal and free. Tyner is said to have been unhappy about that change in direction: “I didn’t see myself making any contribution to that music… All I could hear was a lot of noise. I didn’t have any feeling for the music, and when I don’t have feelings, I don’t play.” (So, I guess that is him and me both)

Tyner released six of his own titles whilst under contract to Impulse up to 1964 , and after leaving Coltrane, recorded for Blue Note with many bop greats in their second wind, Hank Mobley, Lee Morgan, Donald Byrd, Stanley Turrentine, Lou Donaldson and Bobby Hutcherson. In 1967, he recorded this, his first title for Liberty/ Blue Note, The Real McCoy, followed by a string of albums: Tender Moments, Time for Tyner, Expansions, Extensions,  and Cosmos, you can tell by the meditative album titles where this was heading: Enlightenment.

Full Circle: Fast forward to the summer of 2005, when a press release announces Tyner joins forces with the Blue Note Jazz Club in New York and becomes the first client of Blue Note Management, forming his own record label McCoy Tyner Music. The label is a subsidiary of the Blue Note’s In-House record label, Half Note Records.

With concert dates booked through to  Spring 2013, Tyner stands out as the only surviving member of the John Coltrane Quartet still standing and still playing.

Arguably Tyner’s best recording, The Real McCoy stands out as a blue-blooded Blue Note with three veritable legends on side, Joe Henderson, Ron Carter and Elvin Jones, caught merely by an accident of history on the wrong side of the line after the sale of Blue Note to Liberty Records. This is a Blue Note in everything but the Liberty label, but less savvy dealers label it as a Liberty second citizen, priced accordingly.

For the jazz pianist

According to his Wiki: Tyner’s playing can be distinguished by a low bass left hand, in which he tends to raise his arm relatively high above the keyboard for an emphatic attack; the fact that Tyner is left-handed may contribute to this distinctively powerful style. Tyner’s unique right-hand soloing is recognizable for a detached, or staccato, quality. His melodic vocabulary is rich, ranging from raw blues to complexly superimposed pentatonic scales; his unique approach to chord voicing, most characteristically by fourths, has influenced a wide array of contemporary jazz pianists.

In a word from my more limited musical vocabulary, Great!

Liberty supported pressing-close-to-market, hence its East Coast and West Coast pressing plant acquisitions. I reckon around 10% of my Liberty pressings  have this ring. These are always Keystone labels and mostly Van Gelder metal i.e. the plant concerned had merely to provide Liberty with additional pressing capacity, and a central location could ship in any direction. 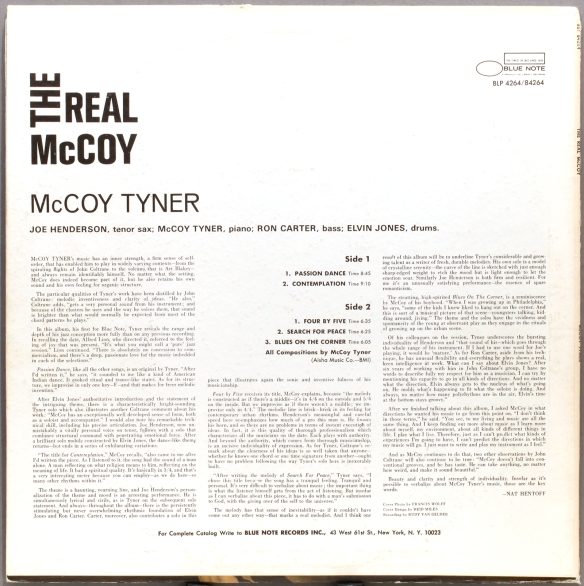 Source: A couple of years back, turned up out of the blue in a second-hand record store, very modestly price accorded by its Liberty status.

As sometimes happens, I discovered I have several Tyner albums tucked away on the shelves, unplayed for several years, perhaps not ready to appreciate them until now. That’s a little bonus from writing. I am on notice to take a second look at where Tyner went from here.