Bristling angular theme with with an urgent rhythmic undertow

Supposedly a tribute to the creole and mulatto heritage via New Orleans, though I like it for itself rather than because of any intended attribution.

Andrew Hill’s Grass Roots is a post-Alfred Lion Blue Note with  adventurous and soulful hard bop, replete with off-center soul jazz and Latin tunes. The material marks out Hill as singularly intelligent composer with a sympathetic, if unlikely, line up including Lee Morgan, Booker Ervin, Ron Carter and Freddie Waits. Hill’s compositions and arrangements are as beautiful and complex as ever, and the ventures into groove-based rhythm is not the result of “dumbing-down” but rather another musical colour for Hill’s palette, reaching the parts other soul-jazz does not.

The cover eschews graphic design for “social message”, I guess typical of the later Sixties.I rather suspect it looked different through 1968 eyes than today, when we are saturated with managed communications. An optimistic outlook for the future at that time must have been a brave statement, though whether it tells us anything about the music is an open question.

The run-out on side two contains the enigmatic inscription “114”, as found on a few other Division of Liberty pressings.  114 ring any bells for anyone? (No Danes, please, we have worked that angle to death) 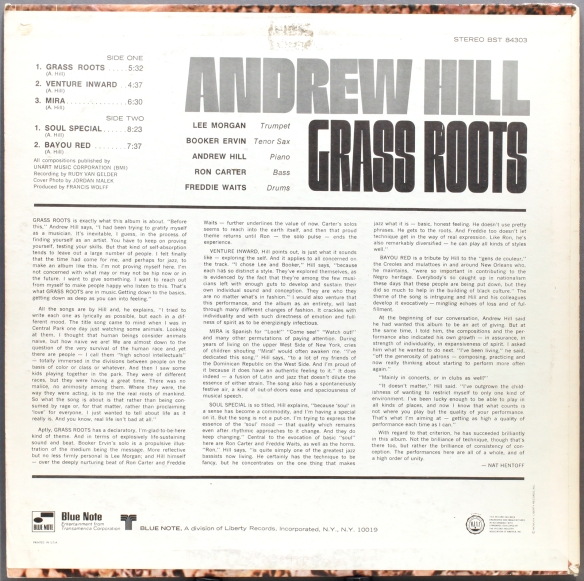 Bought a few years ago from a West London shop, at the time looking for any Andrew Hill I could find, and before I had really appreciated what was going on with the likes of Booker Ervin, and the pressure on musicians to come up with “hits” from their new paymaster, Liberty.

Hill declares his purpose in this album is to address a wider audience. From the subsequent development of his playing over the following decades, perhaps we can be thankful that the wider audience and Hill went their own separate ways.