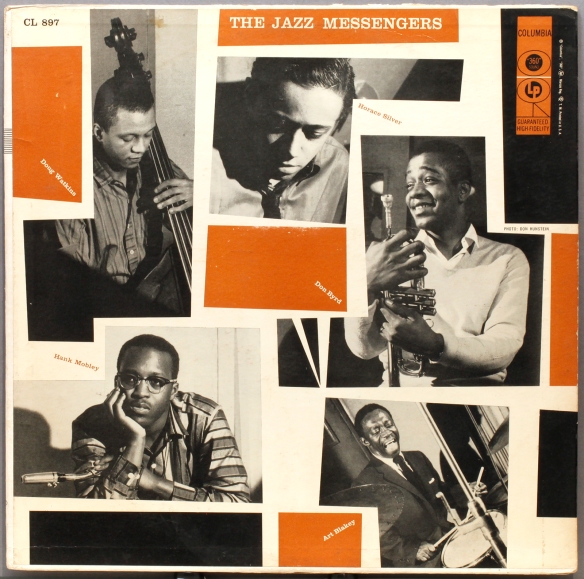 A “collective” including Horace Silver, Lou Donaldson, Clifford Brown and Art Blakey had been playing together since 1954. The changing line up, as it was in 1956, recorded this album, called simply The Jazz Messengers, for Columbia. All clear so far?

Shortly after the recording Horace Silver left the band, taking Mobley, Byrd and Watkins with him to form a new quintet with other drummers – no loyalty in this business. A completely reconstructed band bringing in Jackie Mclean became known as “Art Blakey and the Jazz Messengers” from there on, with Art Blakey as sole leader, the Messengers continued to evolve over the decades with Art Blakey at the helm.

A great believer in the “one graphic is worth a thousand words”, something I used to do professionally, so with a little artistic license, The Changing Face of The Jazz Messengers – the Messenger’s recording line-ups according to their recording session dates, grouped roughly into half-years.  The interesting thing about working through the detail from the bottom up is it corrected a number of “erroneous impressions”  I had gathered, due to some of the prolific output of Blakey’s Messengers being released out of sync with their recording dates, and the uneven flow of the number of titles. It all gets a bit of a jumble, so I now have a much clearer understanding. So that’s me sorted.

From late 1964, the line up of the Messengers changed  almost completely with every recording, even including Keith Jarrett on piano, and Chuck Mangione on trumpet among the intake of artists. Jazz had moved on, and of necessity The Jazz Messengers moved with it.

Every time you are faced with a Blakey/ Messengers album and you ask yourself: “I have lots of Blakey albums, do I really need another? the answer to the question  is yes,  look in the liner notes to see who is in the Messengers, then buy it, you won’t be disappointed.

This is an “early” recording of the Messengers, little different to the classic recordings on Lexington labels by Blue Note. You can’t fault the line up, and the music rocks, as you would expect.

You get Columbia’s engineering talent, recorded at Columbia’s legendary NY recording Studio, not van Gelder, Hackensack and Plastylite. An interesting opportunity to sample the difference made by the backroom hero’s of sound recording, mastering and pressing. Columbia Studios, 207 East 30th Street, New York, considered by some to be the greatest recording studio in history, where Kind Of Blue was recorded, and Elmer Bernstein’s West Side Story. A former church, 100 foot high ceiling, room acoustics  like no other.

Columbia gives space on the liner notes to promoting Columbia’s roster of  “popular vocalists”, of little interest to improvisational modern jazz fans. Tick-box corporate marketing stands out like a sore thumb.  Someone also signed off the cover design in which Mobley looks seriously hacked off, perhaps pressaging the move with Silver. But you also get the inside dope on Columbia’s leading edge recording technology.

Thank heavens for Blue Note – you get what it says on the tin (not horse-meat).

Those knowledgeable on Columbia’s matrix code system can probably tell me where this particular pressing emerges in the hierarchy of masters,  mothers and stampers.

Is it desirable? Is it rare? Is it valuable? Sheesh, who knows, it’s a great recording with an unusual provenance, and Mobley is firing on all cylinders with the advantage of youth. Great line up, impossible to resist. Just say Yes, like I did.

Got to love those Six-Eye Columbia.