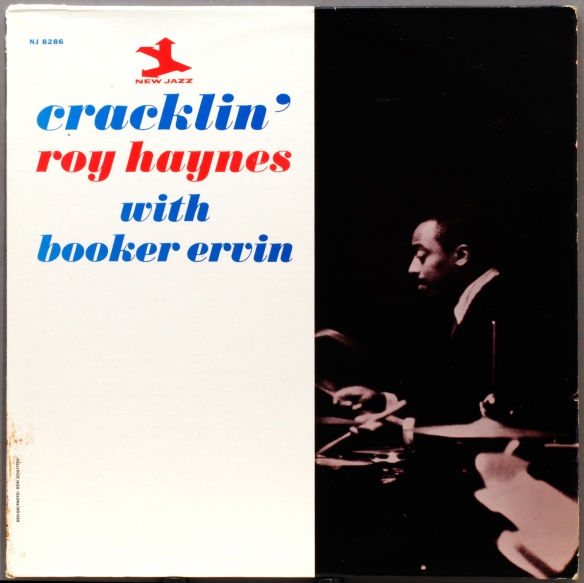 Martin Luther King, Jr. delivers his “I have a dream” speech; the must-have home accessory the Lava Lamp is  launched; The Beatles release their first album Please Please Me; President John F Kennedy is assassinated.

After several thumbs down on the Pony Poindexter/ Booker Ervin Gumbo outing, admittedly slim pickings on the Ervin front, a slice of booker Ervin at his best, teamed with Mr snap crackle Roy Haynes at his best, on one of the best modal jazz albums ever made. Sadly, Booker Ervin never saw his fortieth birthday, taken by kidney didease in 1970. Some consider Ervin Coltrane-lite, but he feels just the right weight to me.

Surprisingly light vinyl for 1963, at only 127 gm. Blue Notes at this time average 165gm. An element of recycled vinyl, which illustrates the cost-cutting competition among New York pressing plants to secure work from independent labels like those of Bob Weinstock. Or perhaps, like recent scandals over beef adulterated with horse-meat, no-one in charge knew at the time that vinylite was being cut with recycled vinyl to reduce pressing costs, otherwise it would have been a more widespread practice than it was, which it wasn’t as far as jazz 12″ LPs go.

RECORD: NEAR MINT+ (NM+) A nearly perfect record. The record should show no obvious signs of wear. May have minor / light hairlines or signs that it has been taken out of the sleeve.   – Vinyl Looks amazing!

JACKET: HAS SOME MINOR CORNER WEAR TO COVER, WITH SOME DISCOLORATION TO SHRINK AT BOTTOM LEFT CORNER THAT HAS GONE THROUGH TO THE COVER ONLY A LITTLE, AND CAN PROBABLY BE CLEANED PRETTY EASLLY, BUT WOULD REQUIRE TAKING THE COVER OUT OF THE SHRINK, AND I DIDN’T WANT TO REMOVE IT FROM THE COVER FILM. COVER REALLY IS IN FANTASTIC CONDITION

What was not mentioned: Like a proportion of New Jazz releases, has an element of recycled vinyl, yielding a low-level background surface noise. On the average record player of its day, never going to be noticeable, on a modern hifi, yes, its there, though feint. Some times it goes with the territory.

I waited a long time for this record to come along – about a year, with one copy sent packing back to America due to being inflated by about two grades, tragically I think it was not a recycled vinyl batch, but came with triple-scratches  and bonus needlesticks, vinyl from hell. Then came the iffy Fantasy reissue, and several auctions  lost to XXL bidders. At last it has found a good home. The shrink was splitting away so I put it out of its misery: its done its job to protect the cover from fifty years of wear and tear. Now the cover can come out in its full laminated glory. I think this one’s a keeper.