Lyndon B. Johnson’s War on Poverty continues. After a set back in Watts, The Affluent gain the upper hand, taking control of many parts of California and the East Coast. The Poor decide to sue, claiming a Constitutional right to remain poor, however their lawyers quickly desert to join The Affluent

Yusef Lateef (born William Huddleston) an innovator in adopting sounds from Eastern cultures and ethnic instruments, I think poorly labelled a forerunner of “world music”.  To my ear, with shelves full of World Music, any ethnic references remain very much within the scope of Sixties modern jazz.

After a spells recording for Savoy and Prestige, and two years with the Cannonball Adderley Quintet (1962-4), Lateef began recording for Impulse, of which this album is one. By this time he was promoting his concept of Autophysiopsychic Music, meaning music which comes from one’s physical, mental, and spiritual self.  He later developed this idea as a music professor and teacher, which occupied him most of the following decades.

Most of Lateef’s generation had learned to play themselves, with a little start up help from a  free college education after army service, schooled in the bigger bands, working as musicians playing for paying audiences, learning through doing. You wonder what became of his students, graduating in Autophysiopsychic Music. Someone I read recently commenting on the intellectualisation of music said you can now go to college and spend three years studying John Coltrane; but you just can’t get a job as him.

May be I am on the wrong side of the argument, but I think they would have been better served studying to become a lawyer, becoming affluent through representing the poor, thereby affording lots of Yusef Lateef and John Coltrane records, to enjoy in their  swanky Upper East Side condo. Some might call this cynical, but I can only assure you my ideas come from my own mental, physical and spiritual self.

Putting aside any intellectual value-added, Lateef’s music is interesting, creative, and I like his abstract avant garde Medula Sonata perhaps a little more than his more conventional offerings, though these are very enjoyable outings in themselves.

Vinyl: Impulse  AS-92 Stereo US original – Side A: VAN GELDER mastered, Side B: matrix machine stamp B-1 – re-mastered, no attribution, different engineer, . Something went on here!

Impulse stereo is a very effective presentation and without taking sides in what became known as The Stereo Wars (2013-5) I’m definitely with the Stereo Forces when it comes to Impulse. Mono Incoming! 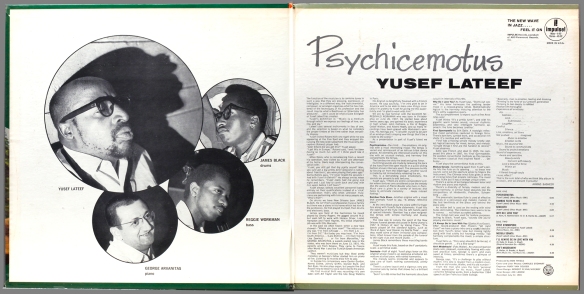 GRADING VINYL :  VERY GOOD PLUS – FULL ORIGINAL SHEEN – LIES FLAT ON THE TURNTABLE. PAPER LABELS EXCELLENT.SLEEVE GRADING :  HEAVY CARD GATEFOLD – NO SPLITS OR TEARS, CLEAR LEGIBLE UNDAMAGED SPINE, CORNERS REALLY NICE SMALL AMOUNT OF WEAR AT BOTTOM OF SPINE, COUPLE OF CREASES ACROSS SPINE, WOULD GRADE AS MINIMUM EXCELLENT QUITE TEMPTED BECAUSE OF AGE OF RECORD TO SAY NEAR MINT

Note the matrix numbers cited by the seller are total clusterfcuk – bear no relation to the actuals, that’s the problem with cut and paste descriptions when sellers take shortcuts. These are an A/B1 matrix not a 1-L 2-L. The seller also miss-described another record I bought as an Blue Note original when it was a Liberty reissue – that cost him an agreed 60% discount. Another of his for sale, vinyl described as Excellent, has just arrived, bearing a half inch feelable scratch. One description error is understandable, three is beginning to look like a problem grading..