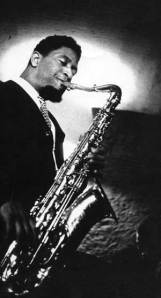 The tenor saxophone is probably the most expressive instrument in jazz: nothing else conveys the full gamut of human emotion than that horn. There are the giants of the tenor saxophone –  Coltrane and Rollins – but this is your chance to nominate who else amongst the other most acclaimed tenor sax players in the Fifties and Sixties you would nominate as deserving a place in the ten greatest in the Tenor Saxophone Hall of Fame. (My, that was a long sentence)

I’ve chosen a slate of just over thirty candidates from hundreds of hopefuls, of which  ten will go through to the finals and the remainder will be going home.

The list covers artists predominantly known for their tenor prowess, it doesn’t mean they didn’t also play some other instruments, nor does it mean there aren’t artists who also played tenor in addition to another instrument. Roland Kirk will have his own poll later, Best Simultaneous Multi-instrumentalist, and he’s won already.  And I have almost certainly left a few out that are among your favourites.

Ultimately, responsibility for inclusion in the list is entirely mine. If your favourite isn’t in the list, you have one empty place where you can nominate an additional artist.  If you really want to see another name included, comments are allowed, make your list. Otherwise, add to the “other” category. No scowling or sulking. This is meant to be fun  🙂 🙂 🙂 🙂 🙂

Artist names have been set to random order so as not to favour those early in the list. There are no right answers (apart from Tina Brooks, and Booker Ervin.  And Barney Wilen. And…)

You have up to ten votes. Choose wisely. If you have difficulty counting up to ten, ask your mom for help. If she has difficulty..

Remember, the poll is anonymous. You don’t have to vote for Rollins and Coltrane. No one will know.  Apart from me – and JazziLeaks.

Visit often and see how your favourites are doing

Good Luck, and thanks for voting

Technical Note: I am experimenting with the ip-address block to prevent ballot box-stuffing, as apparently it was possible to vote more than once in a previous poll. If you experience any problems voting let me know. I probably won’t know how to fix it, but I’ll sound sympathetic

NB Looks like Poll Daddy gives you one voting session only, so you need to cast all your votes, up to the maximum number allowed, in the same visit, before you press the “Vote” button.

Lester Young added as a late entry, by popular request. Well, by  two people actually. That’s popular enough for me. In order to allow catch up, I have increased the maximum number of votes per ip address from ten to eleven. This may allow an extra vote, or not. (It must remain our secret. Shhhh!  I’ll never make a very good pollster). Be warned, there is a coachload of Ritchie Kamuca fans just pulled into the car park, and they are spoiling for a fight.

And Clifford Jordan, Lester Young, and Albert Ayler. Lot of people have already voted so these late entries are at a disadvantage and not likely to attract the votes they deserve.

45 thoughts on “The saX Factor: vote now for your Favourite Tenors”