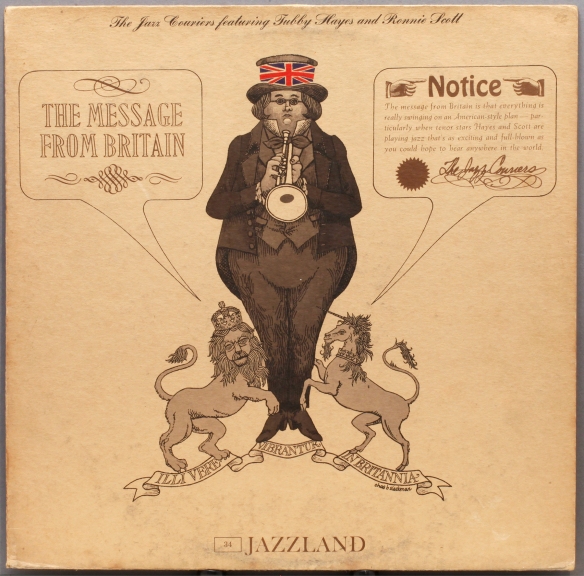 Selection 2: If This Isn’t Love (Harburg-Lane)

British jazz, but nothing especially British in the song choices, all well-known standards. Tubby Hayes is at his most energetic here. Just when you think he can’t go any faster.. he overtakes himself on the inside. A decade his elder, Ronnie Scott gives him a run for his money, as the two dutifully deliver the standard opening statements of the melody and, without further ado, step on to the racetrack. Other titles include Tubby on Flute and vibraphone, and whilst versatility was generally considered “a good thing”, it’s the tenor where Tubby excels. Cockney garrulous someone once described him, and no worse for that.

After the  Esquire I thought it can’t get any worse, then this comes along. It’s not even Swinging Sixties Britain, cool Britannia, it’s Charles Dickens Britain, morning coat and top hat, chimney sweeps dancing on rooftops, rampant pox, Jack the Ripper welcomes you to London as he draws his cloak around you. About as British as the queue for entry to the Tower of London. The design is by one Ken Deardoff, drawn by Chas Slackman. Ken takes the bullet. 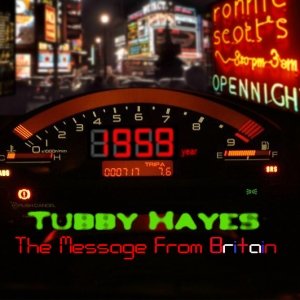 OK that cover is rubbish too, five minutes in Photoshop, but you have to admit it is more, more…colourful… At a pinch you can pick up the Eighties Jasmine reissue – with the Tempo cover – for not many pesos, but it’s not the original and you will always know it. But the original Tempo release, which has altogether more class, will set you back a tidy sum, though it is cover you would want to own 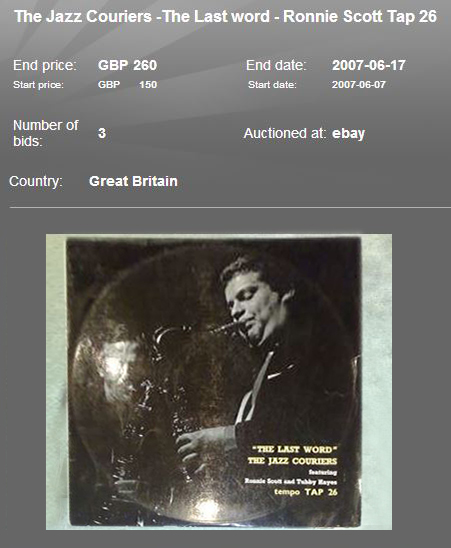 US Jazzland pressings tend to be “variable in quality” but this sample seems excellent. Not quite up to the standard of British Decca-pressed Tempo, but better than the much later Jasmine reissue and other Jazzlands in my collection.

It is said the original tapes of Tony Hall’s Tempo Records were lost during a Decca reorganisation in the Seventies, which may in part account for the extraordinary price Tempo’s command today. This US Jazzland , dating from the early Sixties, will have been mastered from a fresh copy tape of the original recording, before it became lost. This offers the intriguing prospect that what you listen to here on the US Jazzland pressing is sonically  closer to the UK original recording than either later  reissues or CD.

The Message From Britain is “Listen Up, Dudes, Tubbs Speaks” 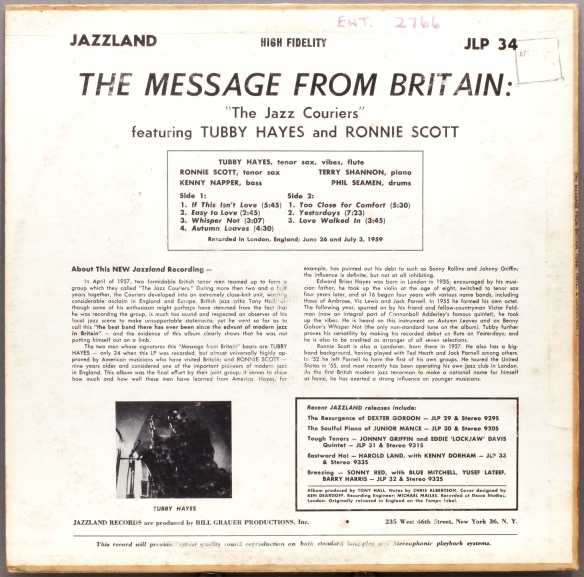 The seller was no doubt equally embarrassed by the cover, to the extent that the picture they used on Ebay was merely the label, omitting the cover altogether, say no more. 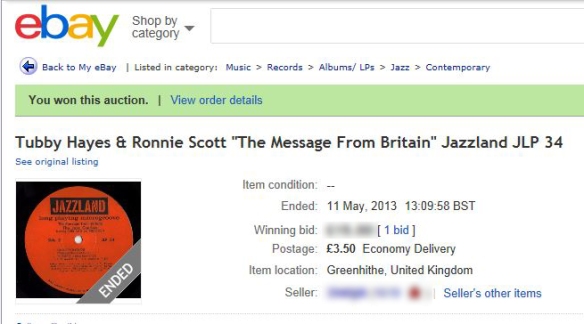 They say you can not judge a book by its cover, even less can you judge an LP by its cover, but this cover is completely undermined the market value of the vinyl. Relatively easy find on-line, no one will envy you with that cover.

Nice great-sounding copy, a pleasure to hear Tubbs so nicely recorded. I’m pleased, especially with the price. For a fraction of the cost of the Tempo, if you can live with Mr Micawber on the cover.

May possibly turn a few heads at the East London DJ Jazz Collective, but elsewhere not enough people know much about Tubbs or British Jazz, which is a pity. Edward Brian “Tubby” Hayes stands comparison with the best of his American counterparts.

Cover is original as probably are the paper labels, though not the pressing, which would normally be Deep Groove.  Could be a reissue for Orpheum Productions, who bought the Riverside catalogue around 1966. Undetermined whether the pressing was by a legacy original stamper or remastered from tape – you would need to own a DG original to compare the matrix side by side.

On close examination, in addition to the faint handwritten matrix, the run out does contain a machine-stamp code letters “RI” on both sides,. “Riverside”? A contract pressing? Could it still be “original”? 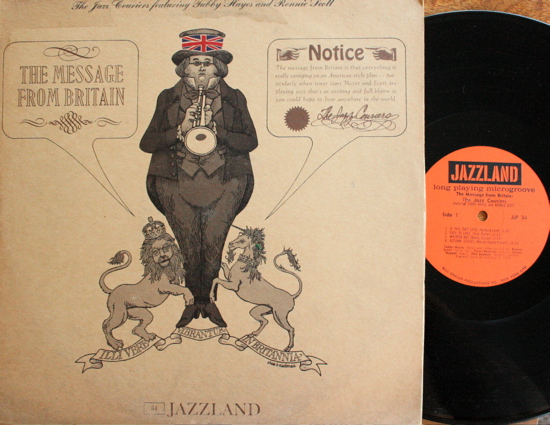 The odds favour DG as the original.

10 thoughts on “Tubby Hayes: The Message from Britain (1959) Jazzland”