Selection 2: How can You Lose? (Benny Carter)

First up, in mono:

You have to admit the timing is impeccable. A leap year.

Smack Up  differs from the usual West Coast formula, of standards and show tunes, in featuring songs composed by other saxophonists, from the famous Benny Carter’s How Can You Lose? to the infamous Ornette Coleman’s Tears Inside , and the deserving-of-wider-recognition Harold Land for the title track Smack Up. The resulting variety of styles gives the album greater breadth than Pepper’s other records, or indeed  most West Coast records.

The playing is terrific, with energy and swing in equal measure, and is one of the highlights of Pepper’s recording career. Having already recorded one of the all time great jazz albums in 1957′s  Art Pepper Meets the Rhythm Section up there with Kind of Blue in my opinion, Art adds “Smack Up” to the austerity-burdened record collector’s must-have list.

Shortly after recording “Smack Up” Pepper was sentenced to three years jail for heroin possession. Instead of a War on Drug Dealers, the forces of law and order mounted a War on Musicians. It made a sort of sense from their point of view: at least musicians didn’t generally shoot back.

Interesting question why the quote marks around the record title “Smack Up” not Smack Up. Koenig must have been aware of Pepper’s habit and the slang term smack for heroin, perhaps obliquely referring to drug use from a safe distance. A long way from The Stranglers positive tribute to Golden Brown. 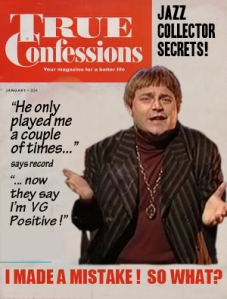 I gave up on Pepper’s autobiography Straight Life part way through, feeling my time was not well spent reading about his life. His relationship with his dad, how he lost his virginity, his continuous pursuit of drugs, none of the early chapters held much interest for me from the point of view of the music. He had great talent as a  saxophone player, which I appreciate, and the rest of his life was something of a mess. I may return for the Prisoner: Cell Block H years, but until then, I think I’ll stick to listening to Art.

One thing, probably the only thing, Lester Koenig’s Contemporary Records fails on is the quality of manufacture of their covers. The design is immaculate, fine photography, layout, but all pasted on flimsy card, art paper unlaminated  (deadly to remove stickers from) and they rarely wear well over the years – split seams, and ageing and mottling. Compared to some of the laminated beauties produced for Blue Note at the same time, an unfortunate economy, but perhaps these things were never intended to last fifty years. That’s more than a Life Sentence.

Contemporary are among the most cloned records around, which turn up with depressing frequency in record sales.The runout of an authentic original Contemporary pressing will show the Lester Koenig machine stamp matrix LKLxxx or LKSxxx…and stamper number eg “D4”, no catalogue number or other handwritten codes that are the handiwork of the clone-maker (on very rare occasions, examples have been seen with both original stamper matrix and handwritten codes, suggesting use of a surviving stamper) With Contemporary you must study the run-out carefully before parting with the cash.

Source: from the collection of the late Brian Clark.

Despite owning a US Stereo and a UK Contemporary Vogue, I couldn’t resist a US original mono. Roy DuNann’s engineering is a delight, the only engineer who could give RVG a run for his money, and US Contemporary pressings are outstanding. When I can get around to it, I must  A:B the US mono against the UK mono, which is re-mastered from copy tape by Decca engineers. Interesting to find out how the result differs, if at all.

Any gaps in your Art Pepper collection should be filled as a priority, and this one is essential, as are all the others

US originals are few and far between here in UK because of UK licensing to Vogue, so I am entitled to feel smug