Once again LJC dips his toe in the bathtub of Free Jazz .This Cecil Taylor recording from 1973 has the virtue of being an original US production on Cecil’s own Unit Core label. It is an original so there is no fidelity issue about “reissues”. This is it sounding at its best. I couldn’t be bothered with the hand-written poetry-lite of the liner notes. I don’t know if I missed anything.

Fear of Music:  Why do people get Rothko and not Stockhausen?

That’s the title of a book by music journalist David Stubbs. The premise of the book is that people willingly accept abstract and experimental art but don’t “get it” when the sense becomes sound rather than sight. The equivalence of abstract art and abstract sound is flawed, but it’s an analogy used many times, and is a useful starting point to examine the different ways our senses interpret two artistic media: painting and music.

Ornette Coleman selected Jackson Pollock’s White Light  as the metaphor for his double quartet simultaneous improvisation. The instantly recognisable New York 1940’s drip-school oeuvre of  Pollock has just one problem – they all tend to look the same to me, as does the sound of free jazz . Much “energy”: splatter/noise, a riot of colour/sound, but stylistically, the same.

The opening few minutes of Spring of Two Blue-J’s Part 2, I am quite comfortable with: scene setting, atmospheric, sparse, fits well with some of my John Adam’s modern contemporary pieces. However ten minutes later I am struggling. While I like “freedom” in art, I don’t like it so much in sound. Importantly, it bothers me why I don’t.

It has something to do with time

If you don’t like a picture you simply look away and move on. At best you might spend a couple of minutes on it. With music there is the time it takes to complete – in Cecil Taylor’s case, around twenty minutes per side or up to three hours in concert. That’s a lot longer than you would probably spend looking at a picture, and a lot longer than you would spend looking at a picture you didn’t like.

Can you have too much freedom?

I firmly believe in artistic and musical freedom, to break and bend the rules, to experiment, to innovate, but does Taylor’s level of freedom from melody, rhythm and harmony make for good satisfying music?

Beauty is in the ear of the beholder

To some people, Taylor’s freedom clearly does. At the end of the Taylor piece, the audience applaud the performance. Unless the applause is picking up the audience’s gratitude that it’s over, who is to say they are wrong? The adjective I have noted that is frequently used by fans of Taylor to say what they like about his music is the word “beautiful”. Beauty is more usually associated with sight – a visual aesthetic dimension –  but here applied to describe sound. Interesting. May be somewhere here is the key, in this fusion of two senses.

The other attribute of free jazz appreciation I have noted is the value put on surprise, and unpredictability You don’t know what will happen next. It is true, at least on first hearing, though I worry about repeated listening and what effect familiarity has. Do you only ever play it once? Would you enjoy truly random notation that changed continually? I suspect enjoyment of free jazz requires developing a level of pattern recognition, just not a pattern that is immediately predictable, but one that is significantly less predictable.

Beauty and the Beat

During some of the more pop-oriented numbers at the recent Nice Jazz Festival, I couldn’t help but notice the number of people in the audience (mostly ladies, of a certain age) who, whenever they sensed common time, would leap to their feet to clap along with the music, on the first and third beat. That is what they wanted from the music, the chance to join in, raise their spirits, while I look for something more adventurous than keeping time. 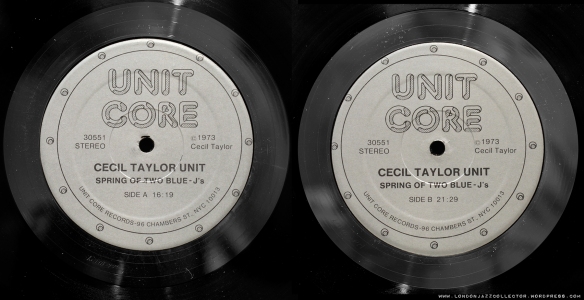 I’d love to be the super-cool hipster just recently returned from Saturn. On my Jazz Journey I rode the subway train, starting at Bop Central, changing at Cool St and Post-Modern Plaza, but I still get off at the Avant Garde train station. Free Jazz remains a station too far. Taylor is still too far out for me. Another time, maybe

If you want to articulate your opinions, its open season, the floor is yours, share your thoughts.

To say you like or don’t like something is as far as many people get. The “like button” (or red arrow) can be pressed without any requirement to explain why, it’s a position no-one can argue with. For those who would go further, offer some insight, welcome to the difficult world of music appreciation.

Cecil Taylor’s music is what music would sound like if the components of melody, harmony and rhythm were merely implied rather than stated. The moment one crystalized into form, it evaporates. Light retreats into shadow. Melody without direction, constantly elusive. Harmony is absent or present only fleetingly. Music that avoids being defined, but nevertheless tightly composed, not random, but always out of reach. Is this what people who like it like about it?

Lets try a different tack: why do people dislike it? The question challenges you to say what you want from music, that is absent there. It’s just notes after all, as all music. Maybe it’s the order he places the notes in: the “wrong” order. Or the wrong notes. What makes a note or its order wrong? Why are some people content with the notes and the order and others not?

I’ve got a good number of Taylor records. I keep listening. I’m in no mood to quit.