Selection 2: Straight, No Chaser (credited on the this 1959 sleeve to one J. Adderley, song no relation of course to one Th. Monk who first recorded it on Monk’s Blue Note Sessions in 1951 (Genius of Modern Music )

I don’t know. Do they possess a passing similarity?

Context: three days after recording Sharpshooters, Adderley returned to the studio, this time in the company of Miles Davis and a different rhythm section, to record the classic Something Else for Blue Note (BN 1595)

Allmusic reviewer Scott Yanow awarded the album 4 stars , but was possibly in a hurry to submit  his copy that day:

A little lean on content and only marginally an improvement on the “People who like  this sort of music will be sure to find something here to their liking” Amazon School of Music Criticism ( which is generally  followed by a track listing and the musician credits, to further pad it out) Adderley’s soaring alto solos here echo the blinding performance he delivered during Autumn Leaves on the Something Else album, one of my personal greatest alto solos of all time

Adderley is my personal favourite alto player and dependable solo quality.You may have some candidates of your own for this prestigious award. Speak up. Send in your suggestions for best alto solo ever. David Sanborn nominations are automatically disqualified, Parkers famous alto break is assumed.

It’s hard to fault the visual association with the album title, though a picky art director might quibble the target lacks an effective strike from a cannonball. 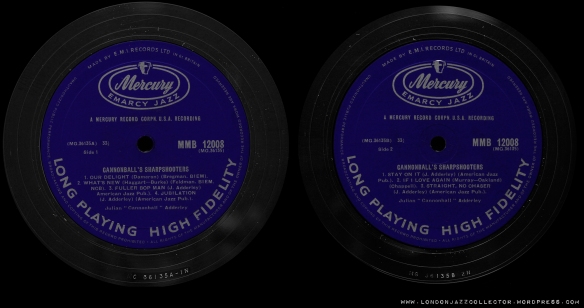 Source: local record shop in outer South London. Always delighted to lay hands on an Adderley album from this, his most fertile period. All that he needed now was to add Coltrane, which briefly he did.