When it comes to the affordable pressings of classic Blue Note titles, Japanese vintage vinyl of the Seventies and Eighties offers an attractive proposition. Usually in immaculate condition, on near-silent vinyl, King and Toshiba offer an identifiably analog presentation, and they can be found for as little as $25, and no seam splits or dog-eared corners.  The question is are they as good as “originals”?. After many upgrades from a Japanese copy to an original, in my view, unequivocally no. However they are better than many other reissues and  have two significant characteristics originals lack – availability and affordability.

LJC presents the ultimate shoot out – the two Blue Note reissue giants from Tokyo Japan do battle – King vs.Toshiba. The sample record?  Why, none other than the most expensive Blue Note on record, Hank Mobley BLP 1568. Of course you all have an original, don’t you. Well some of you may. I happened to acquire a second Japanese copy, and seemed a good test.

The Fab-4 highest sales of Mobley 1568 brushing $5,000 – the highest of which looks like a Leon Leavitt copy at $5,600. I am fascinated to know how many LJC readers have a real original, we’ll check that out at the end.

Holy smokin’ crocodiles! Where did they get that idea from. How very Japanese, inscrutable sense of humour. Thirty Blue Notes were re-issued in this series, including a genuine non-RVG non-digital Tina Brooks’ True Blue. That would make an interesting comparison, but I don’t have it.

Interesting presence on this recording, aside from Mobley, is Shafi Hadi (Curtis Porter) also on tenor – two tenors? – and alto. Hadi is found on many of the important Mingus albums between 1957 and 61 , including East Coasting and Ah Um. Apparently still living, age 84, but disappeared as a musician. 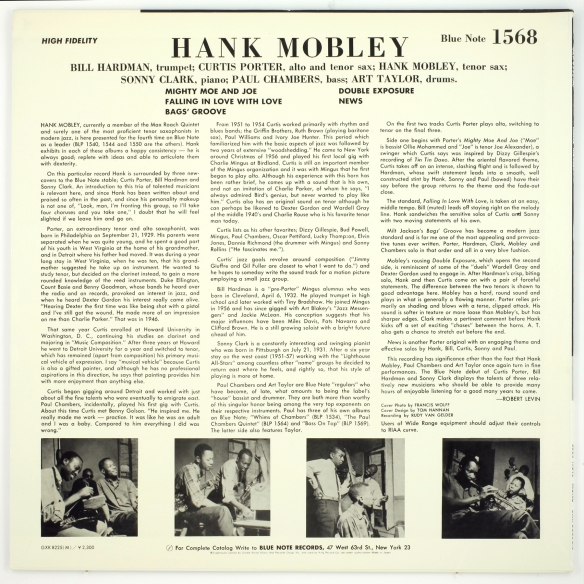 1979 – Blue Note gets a new owner, EMI/ Capitol, but Japanese reissues continue through King Record company, partner/ licencee of United Artists. Five  years later…1984 Toshiba-EMI reissue this recording again under the Toshiba-EMI label . You have to wonder, did EMI corporate know what they were doing? 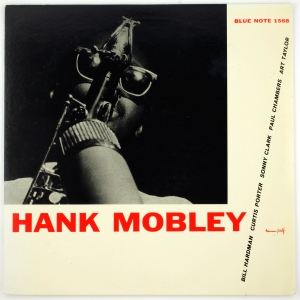 All settings remain the same, speed and volume untouched. Only three years separate the two editions. Each squashed into 160kbs rip and played back on PC speakers or worse. I understand some people access the net through their phone. It’ll never catch on, you know. 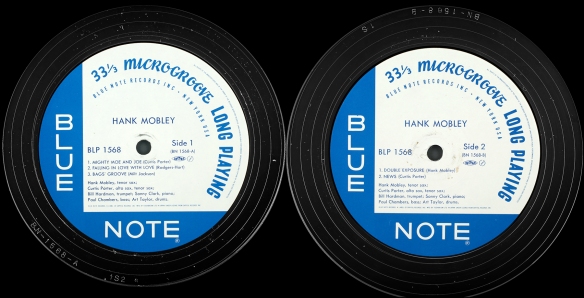 Fast forward to the present: more options (but no sample)

DBLP 017 Premium Vinyl Reissue – Quality Record Pressings (Chad Kassem, Kansas)Its cheeky,  its got a deep groove, and it says it’s from the original tapes – now fifty-five years old. Is that a good thing?

There is also a Music Matters Edition (mono) . Mobley 1568 was recorded in June of ’57, one month after RVG started recording in Stereo, but while he was also separately recording in Mono. As I know this is a subject close to the heart, I’ll quote Joe Harley, an MM guru, at some length from a Hoffman thread:

… “Rudy’s early stereo recordings actually make for fascinating study. Earlier this year I became obsessed with tracking, album by album,  Rudy’s development as a stereo recording engineer. The topic is worth of a much more in-depth discussion, which I’ll present when I get a bit more time. But I’ve come to believe that when Rudy states that he didn’t monitor in stereo he’s actually remembering his very early days recording stereo. His stereo panning in the beginning is strange, in the way that someone who is not monitoring properly in stereo is strange. On the stereo master tape of Hank Mobley Sextet for instance, Rudy has ALL of the horns on the left side, drums, bass and piano on the right and not a thing in the middle. It’s very disconcerting to say the least, to hear this big hole in the middle.

Then, you can hear, session by session, as Rudy starts to get his stereo chops together. He eventually gets into his standard trumpet left, sax right, piano and bass up the middle and drums rightish mix. (When he recorded a quartet, the lead instrument, trumpet or sax, was placed left.) But on a number of these early RVG stereos, the stereo mix makes about as much sense as those 1st Beatle stereo LPs with the vocals on one side and the “band” on the other.

As we stated on our site (MM), we will listen to each master and determine, based on what we hear, whether to present in stereo or mono. After my research earlier this year, this is actually much easier. I can pinpoint the date when Rudy got his stereo mixing together….”

Or you can mortgage the farm and fight for an original. One owner of an original uploaded a picture of their original to Discogs. Bloody show off. But it is not the controversial NY 23 on one side, or so I read.

The Toshiba was one of the first records I bought some five years ago. It wasn’t played very often, it came across as rather flat and uninviting, despite the record’s fame. When viewing the late Brian Clark collection, a King pressing came up. Usual issue – do I need two Japanese copies? Curiosity got the better of me as it wasn’t expensive. I was pleasantly surprised how much more lively and exciting the King sounded, on Big Sister of course. Do I want another copy, an original? Well, it would be nice to play one, even just the once. Someone start a Blue Note lending library? Please?

I’m curious, who has an original? If not, I guess that’s most of us,  what edition/s if any do you have? For some reason, 1568 was dropped from the Blue Note catalogue and not reissued by Liberty or United Artists domestic consumption, which seems a strange omission. So it’s the original, the Japanese, or fast-forward to the present “audiophile” editions.

More on Blue Note Japanese pressings in the just updated  LJC Blue Note in Japan Guide. Become an obi-expert, or an obi one can no’ be, MacDuff. (Macbeth). You didn’t know Shakespeare was a big fan of Japanese  pressings? Me neither.

Any comments on the comparative rips  or anything else, even Van Gelder stereo, welcome as always.