One chilly November day in 1971, Monk found himself in  LJC’s home town, London, accompanied by another jazz-elder, Art Blakey, and Al McKibbon on bass, to record a session for Alan Bates’ Black Lion label. In the Chappell Studios he recorded many of the tunes he had spent much of his life playing, and it was to be one of his last recordings, the summation of a life’s musical work.

From the same source tapes, two pressings that throw light on the different musical experience that results from different engineering decisions. First up the Mosiac, then  the “original” 1973 Black Lion release (one of three (possibly two)  Black Lion LPs from that session), recording engineer Richard Timperley. Michael Cuscuna chose Rudy Van Gelder as mastering engineer. Can RVG’s master touch breathe new life into the original recording? Was Van Gelder right to opt for a mono mix, or the original’s decision to stick the drums out on the right, and nowhere else to go in stereo?   You decide. Interested in all opinions.

Both in glorious 320kbps MP3 recorded from “Big Sister”. The target track, Misterioso, one of Monk’s most delicious compositions, delicious , it should be said, like all the others, high in musical calories. 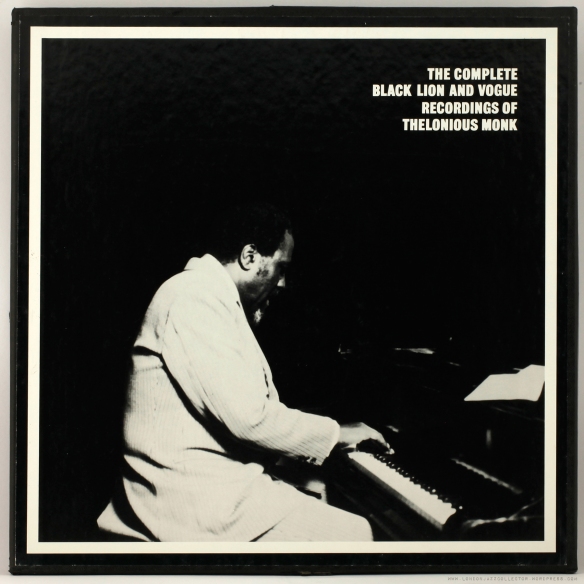 Monk’s last studio recordings as leader, paired in this intriguing four LP set with one of his earliest sessions – not well served on vinyl, the Paris Swing (subsequently Vogue) session from 1954. This collection therefore neatly sweeps up the few recordings which fell outside his Blue Note, Riverside and Columbia legacy, contrasting the young devil Monk with  the old devil Monk.

Surprise on opening the box –  a Van Gelder re-master! The eponymous EMI Ron McMaster elbowed to one side by Cuscuna,  to allow Van Gelder the opportunity to show how it’s done. In an unexpected artistic choice, RVG opts for a mono mix. No indication when this box set was produced but the excellent Mosaic booklet offers one possibility, with liner notes attributed to 1985. One can safely say this wasn’t one Rudy  remastered for CD and transferred to vinyl like some of those Japanese modern Toshiba “RVG Remastered” pressings.

Philips UK pressing, stereo.  That cover: only one man can get away with a black leather cap topped with a cherry cupcake and still look cool. But it just wouldn’t look right without the cigarette smoke trails drifting up photogenically in a photographically darkened studio. Oddly it actually captures the physical presence of Monk in a way that the more clinical black and white Mosiac cover doesn’t.  Between the two of them they could each have done a better job. 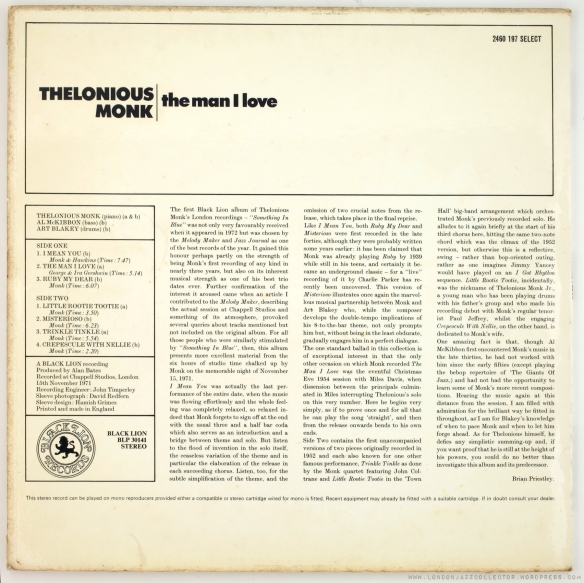 The Mosaic box set came via Ebay, only three bidders, shame on you, British jazz fans.  Clearly not the subject of collector-lust in Japan, as no sign of Tokyo Jazz Collector who I am sure is haunting current European auctions of late. Interplanetary Postage can be a bit fierce with Mosiac box sets.

I have had the Black Lion issue for some time, and I felt  the audio quality was a bit of a  let down whenever I played it. Couldn’t put my finger on why, but the Van Gelder remaster puts it back into a proper perspective. The Mosaic bonus addition of the 1954  Paris Sessions offers an interesting longitudinal perspective on the genius that was Monk.

All in all, a welcome addition to the burgeoning “M” shelf of the LJC Collection. Mingus, Monk, Mobley, Morgan, Mulligan, Murray … why “M”?

Some people will no doubt prefer the original Black Lion presentation, especially if I voice a preference for the Mosaic. The internet is like that. Oi, LJC, I disagree. Fine with me.