Powell is the definitive genius of bop piano, Charlie Parker re-imagined as a pianist, who could tear up the keyboard in a unique combination of fast execution and an unquenchable flow of ideas unlike anyone else, and changed the way you think of piano and it’s possibilities in the right hands.

Much is written of Powell’s troubled personal life, critically appraising the impact of  his mental health on his playing. Whilst that may help fill the pages of a biography, I don’t find it helps towards enjoyment of listening to his playing. It’s like he is to be faulted for not always being always on top of his game, but Bud on a bad day is better than most people on their best. Bill Evans, no mean piano-player himself,  paid Powell this tribute:

If I had to choose one single musician for his artistic integrity, for the incomparable originality of his creation and the grandeur of his work, it would be Bud Powell. He was in a class by himself.

This Verve recording sits between his early recordings for Roost and Savoy, and the later sessions for RCA Victor and Blue Note, though it’s worth being aware that  the early Blue Note titles are recordings dating back to 1949-53 re-mastered but not recorded by van Gelder, while others are Hackensack recordings from the late ’50s.

Connoisseurs of Powell mark changes between the young Powell in his twenties during the 1940’s and his less energetic and more measured later approach, which sounds to me pretty much the normal thing that happens to musicians, none the worse for it. Verve is as good a place as any to dig in, as recording technology by the mid ’50’s had improved to the point where you get a real sense of the music and not archive field recordings like Movietone News. 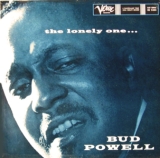 The US Verve “The Snarling One” cover was dropped in favour of an equally odd photo choice, Bud frozen wide-eyed,  hands posed on the keys.

“Look lonely” calls the photographer, struggling to master his brief.

“Lonely, you know,  look lonely, umm, like you are all alone.

I’m not alone. You’re here. What you talkin’ about, man?

Make like you are playing the piano, sir. Not actually, or it will blur the picture. Just hands on the keys, that’s great. Now, look … lonely

That must be it. Bill Evans says Bud Powell was in a class by himself. Lonely, stands to reason. It’s a wrap. It’s all a far cry from Bud’s subsequent Blue Note handle “The Amazing Bud Powell” . One minute  you’re Lonely, next, you’re Amazing. Goes with The Incredible Jimmy Smith, The Eminent J. J. Johnson and probably a few more self-promoting superlatives, but one more than justified in the case of Powell.

They say there are two things which most tax hi-fi to reproduce: the female voice, and the piano. I don’t know about the first as it doesn’t feature much if at all in my repertoire, but it is certainly true of the piano. The melodic and rhythmic aspects are all there, but it too often it is muddy and wooden, lacking the percussive detail of attack and decay of notes, and the harmonic resonance of the cabinet, the sonic complexities that make up the sound of a “real piano”.

I imagine it is not an easy instrument to record well, and certainly van Gelder has taken some criticism for his recording of piano. (“sounds under a pile of wet blankets” someone once described it to me) On first hearing this record, the piano wasn’t sounding right, which for a Bud Powell record is a pretty damning flaw. I put this down to possibly those early microphones back in 1955, unsympathetic recording or weak transfer by EMI, whatever, and parked it in the “come back to this later” pile.

The revelation that occurred after phono amp valves were swapped for vintage Telefunken tubes lead me to bring out my other 1959 HMV/Verve editions, of which I have four. Lo and behold, a transformation had occurred in all of them. Powell sparkled and flowed, glittering legato, arpeggios, cascading figures, tympanic champagne bubbles. It took a lot of upgrades before this piano sounded right, and the introduction of sympathetic first contact amplification at the phono stage did it.

There was nothing wrong with what Verve and EMI had produced from that 1955 recording – it was all there in the groove – the trick was to be able to get it out. And to do that you need to brace yourself and cross over to the dark side, to tubes, where good things begin to happen, that you can no longer explain.

I’ve been a bad boy. I’ve bought some more.

Who knows what will happen next.