1966 and the last official recording for “Blue Note Records Inc”, though pressed for Liberty the following year by their own captive plant, All Disc, Roselle N.J. From here on, it’s Liberty Records all the way.

Music is on the cusp too. A head of steam is building under bop, fracturing it in many directions. People who grew up playing and wanting to play jazz were competing for audience attention with counter-culture rebellion, teenage spending-power and the most important question of the day: “which Beatle is the cutest”? Still to come the fracturing of jazz into more demanding avant-garde, and less demanding funk, and then Franken-fusion. This Horace album still feels like  firm ground, but ground not destined to last.

Of all Silver’s groove-centered records, The Jody Grind winds up as possibly the most challenging. It’s also one of the most underappreciated;  Silver’s piano playing is at its rhythmic, funky best throughout, brimming over with confidence and good cheer, and evoking memories of the classic feel of his early-’60s quintet.

It’s an interesting record which peaked at No. 8 in the Billboard jazz album charts, and is not what you might expect from the cover, though that probably didn’t harm sales.

That title? Jody is apparently a contraction of the name of Joe the Grinder, a character in blues mythology, a ladies man, who seduces the wives and sweethearts of absent prisoners and soldiers.  Grinder is from an old slang verb, to grind, meaning to … Well you can figure that for yourselves. So, The Jody Grind. Blank looks.

No ear of course but the VAN GELDER stamp, and these early NY/Liberty van Gelders sound excellent, and it is not like there is an alternative.

Blue Note’s riposte to the success of Impulse gatefolds? I think Blue Note’s first gatefold catapults Horace into the world of changing fashion (independent mod chicks, no longer bunny playmates) and Horace joins in with a shonky hat, slightly bashful, smiling through it all. Reid Miles seizes the new gatefold back cover opportunity with a visual pun, Horace and the girl’s backs. Sly sense of humour, a great Miles Reid cover.

Why did this gatefold owner affix these strips of tape methodically to the gatefold? Some record owners in the ’60s seemed to have an unhealthy interest in Sellotape verging on bondage. 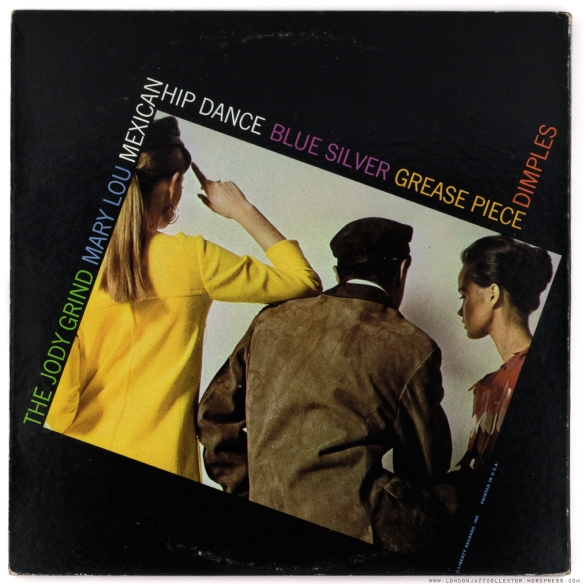 BN 4250 is a landmark in two respects. It marks the end of this retrospective of Horace Silver (not all records covered), and the end of the line of the greatest jazz label, Blue Note, with its sale to Liberty Records in 1966. 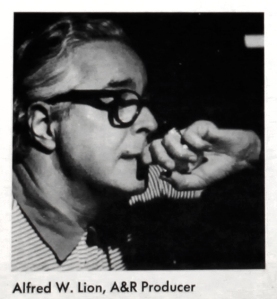 The gatefold photo (taken at the time or not?) shows Lion in pensive mood, perhaps contemplating the merits of this 31st take of Blue Silver and the cost of all that studio time (compared with the only two takes required for Mexican Hip Dance. “Dat svings too, no?”) Or perhaps he is contemplating the future of his creation, Blue Note Records, and the loss of artistic control. Perhaps its uncertainty over the future direction of jazz itself.

Horace went on to make many more records, van Gelder forever, and Lion held on a little longer with Blue Note, but things would never quite be the same again, though the legacy will never be dimmed. When I put a Blue Note record on, I swear, it is now the turntable that smiles.