The track selection Home in Africa is credited to Ronnie Boykins, best known as Sun Ra’s bass player, one more at Home in Outer Space.

The album is home to an unusual “Horace Parlan Sextet” with Johnny Coles on trumpet and the serendipitous addition of Grant Green; the second later recording is more recognizably a Booker Ervin session.

Parlan provides a fine rhythmic canvas with shifting modal textures for some challenging exploration. Booker is searing and passionate as always, partnered perfectly with Woody Shaw, and all the soloists, including Parlan, are able to stretch out, unhindered by too much compositional baggage. Perfect mid ’60s adventurous music.

From the Blue Note vaults , recorded by van Gelder and released towards the end of United Artists tenure of the Blue Note label. The vinyl etchings and labels tell no story except anonymous  manufacture, on which I saved the effort of photography.  The van Gelder recordings are a different story, fresh as yesterday, which thankfully the UA engineers managed to master them accordingly well. This particular title defies all expectations of ’70s re-issues.

The earlier session was later released in 1988 under Horace Parlan’s name as Happy Frame of Mind and the later session was finally released in 2005 as Tex Book Tenor. The Blue Label two-fer offers you fresh vinyl quality for this exciting music 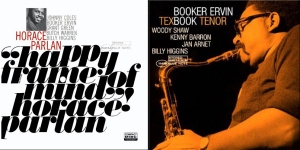 What can I say? It’s not Impulse is it (sigh) But the writing is superior, even if the artwork isn’t. I grimace at the choice of beige paper, which doesn’t age well, and looks “made to look cheap” , if it ever was. This is one of those records you buy despite its cover.

Collectors Corner
If you don’t have this album, go scour the world for  a copy immediately. It should cost no more that $25, for a double LP, astonishing value. Your only difficulty will be the whinny little voice that says  “if it’s so cheap it can’t be any good”.

There are a number of essentials in the two-fer series. I have around fifteen and only one or two don’t make the grade. Some of them are actually reissues of recordings tha are almost impossible to find affordably in their original release (Paul Chambers’ Whim of Chambers, Freddie Hubbard’s Hub Cap) but most are “never before issued re-issues”

Anyone out there have any recommendations in this two-fer series? There are over fifty as I recall.