Selection 1: My Groove, Your Move

I’m going to say it. There are times when I find extended listening to Rollins or Coltrane simply too exhausting, but I know I can put Mobley on the platter and sink into the sofa, relaxed, and float away carried by Mobley’s confident and polished tone, soulful phrasing, and just the right balance of energy and exploration, always making room for the other artists sharing the stage.

The year 1960-1 produced  a rich payload of fast-maturing artists, with Blue Note titles of merit coming thick and fast. Hubbard is a great addition to the more austere Soul Station line up here, to me adding more variety and texture than the much-vaunted title. A week previously Hubbard led his own album Goin’ Up (BN 4056) with Mobley and two weeks later recorded on Kenny Drew’s Undercurrent (BN 4059) also with Mobley. The empathy is well established between Hubbard and Mobley,  burnished trumpet and Mobley’s liquid tenor.

Having absorbed DGMono’s dissection of van Gelder stereo, I had initial misgivings about pursuing an “early”  stereo title that could turn out quite expensive, but Van Gelder is showing more subtlety in his stereo mix here than some earlier efforts. Basically, the quintet format gives him more to play with. Mobley’s presence on one speaker is balanced with Hubbard on the other, the high- energy rhythm section combination of Blakey (no shrinking violet)  and Wynton Kelly (the rhythm-king)  filling in all available space, all joyously cemented together by Paul Chambers. It’s super-group quality performance, and engineering to match, the turntable smiles with this one.

But still people hanker after the more rare Mobley titles, unfairly in my view to the detriment of Roll Call, which is a great cohesive bop-melting pot.

Blue Note Minutiae: (Spotify and I-Tunes enthusiasts may avert their eyes at this point)

The incorporation of Blue Note with trademark protection in 1960 meant the INC and R on label and cover is expected on original pressings of this catalogue number, but the presence of deep groove on only side 2 is vexatious..

BN 4058 mono was the last title where the original pressing is DG both sides, but stereo was often issued at a later date. From BN 4059 titles began appearing with only one or other side as DG, with an occasional appearance right up to the year 1965. It was only at BN 4066 that originals with no-DG both sides appear, so this is at the crossroads of Plastylite pressing plant mixing old and new pressing dies and it is difficult to be certain what identifies the characteristics of a first stereo pressing. Where is a Stereo First Pressing Fundamentalist when you need one?

The laminated duotone cover (err..”packaging”?) finds a tightly-cropped Francis Wolff shot of Mobley poring intently over something, leaving unanswered the question, of what. A “roll call” is an attendance list read out loud to establish who is present.- the connection I guess is the A-list of players found on the record. Fair enough, Reid, but it’s not quite BN 1568. And pink? 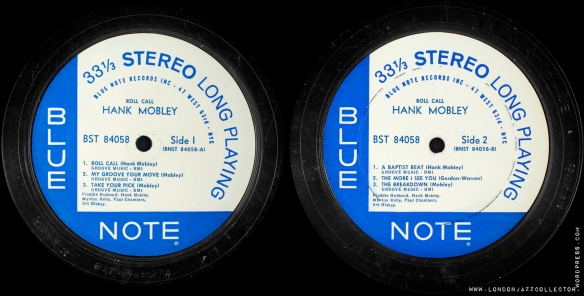 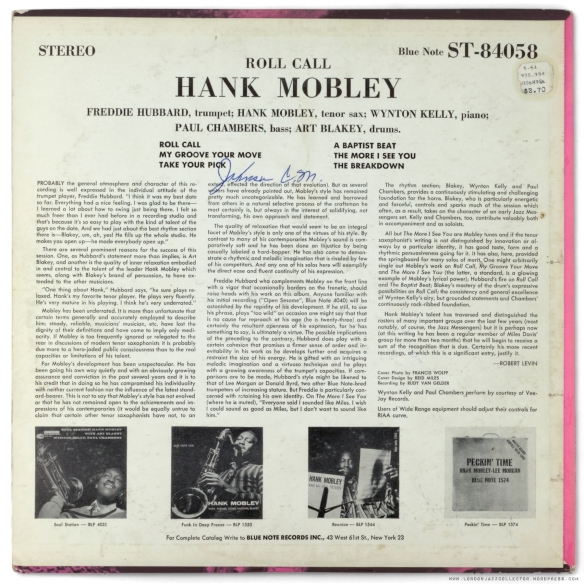 This Mobley Blue Note came my way from a fairly strongly contested Ebay auction, not cheaply but within my house limit, and one which I bet would arrive at a more acceptable price than any of Mobley’ rarer titles. BN 1560 and 1568 are not going to be coming my way any time soon.

To be honest I have never considered rare Blue Notes records actually worth what they cost, though others clearly feel differently.I would rather have several less rare records than one most rare, enjoy new musical  discoveries among lesser titles, but some collectors would take the opposite view, and I can respect that.

Having been fortunate to hold Daryl Sheinman’s original Mobley BN 1560 for several minutes, there is definitely a transfer of kinetic energy through the temporal vortex, a Back To The Future experience, sparking through your fingers holding an authentic historical artefact from the 1950’s

Mobley Mobley Mobley. There may have been better players, but none I personally like as much. That chocolate tenor sound beats vanilla every time…