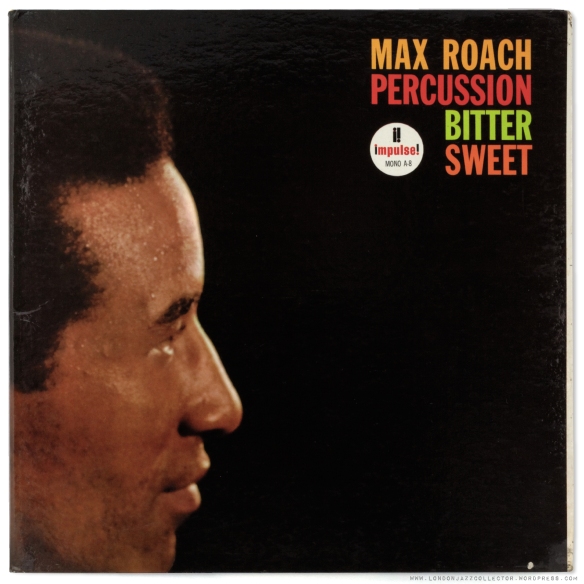 Selection 2: Praise to the Martyr

This very early Impulse title (A-8) offers music of great intensity and seriousness of purpose, against the landscape of the early ’60s civil rights movement. Weaving together references to South Africa and the Afro-American struggle, the four brass instrument front line, including the briefly flowering Booker Little and Eric Dolphy, makes a potent harmonic mix which underlines its overtly political themes. This is music impossible to ignore.

Little’s darting filigree on the hard-swinging “Mama” is indicative of his breakthroughs in harmony and phrasing, while Dolphy’s glorious, airborne flute, fulminating bass clarinet, and torchy, enraged alto enliven the waltzing “Tender Warriors” and the sardonic “Mendacity.”

Clifford Jordan, who am not always a fan of, aquits himself honourably here while Priester enriches the brass with the pungent tones of the trombone. Abbey Lincoln’s theatrical readings leaves the listener in no doubt  of the intended political messages . The ever-insightful John Fordham notes in his 2010  tribute to  Abbey Lincoln “ her status partly rests on securing a place for social-issue songs more usually associated with folk music than jazz“. This is no ordinary musical album, it is embedded with a social message, but it also exists at a musical level. 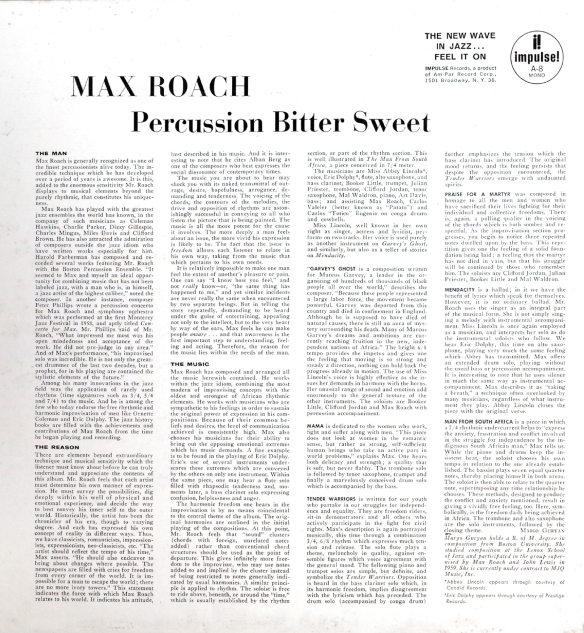 I may be out on a limb here, but I’ll keep sawing.

I am not keen on vocals but the presence of so many great musicians on A-8 overcame my initial misgivings. Musical instruments speak with greater articulation; emotion is translated through body or breath into sound. It’s called  “music”, at its best, a spontaneous collaborative effort of great power and beauty.

Nevertheless I enjoy Archie Shepp’s occasional excursion into oration.  “Dear God…Malcolm!‘ has a power that in a few words resonates with direct emotion. However Miss Abbey Lincoln, who became Mrs Max Roach the following year,  is in the “jazz singer” mould that remains obstinately beyond me. To be fair, the lyrics here reach for a higher level of meaning than the trite in and out of lurve school of song writing. However I confess I love this album in spite of rather than because of the singing.

Taken with its  companion album “We Insist, Freedom Now Suite”, “Percussion Bitter Sweet” has important things to say about the need for change at that point in America’s history. That is understood, not to diminish it, consider it a bonus, but  Percussion Bitter Sweet  is great music, just as passionate as the fury of Charles Mingus berating governor Orville Faubus. It achieves that in its own right, by dint of the quality and performance of its artists and their passionate contributions, as it does in all good music, everywhere. The politics people can go argue about, the music I believe speaks for itself. It speaks well of those who made it.