Selection: We Are Not Alone

End of the ’70s, a marriage of organ soul-jazz and bop, recorded and mastered by Rudy Van Gelder, and produced by Ozzie Cadena, more of whom anon. With so much attention here lavished on artists and engineers, the producer rarely gets a look in. Time to put this right. There are a lot of soul-jazz  organ jazz fans I know, and they have been suffering neglect, so I will put that right too.

The presence of Bill Hardman, veteran sparring partner of Jackie Mclean and former Jazz Messenger, plus Basie stalwart Frank Wess on tenor, ensures this is no ordinary organ-trio soul-jazz outing. The solid brass polish lends considerable weight to the album’s bop credentials, while ever dependable Grady Tate pushes everything along. The guitar presence contributes rhythmic comping as well as tasteful solos, including octave-paired fretwork in the manner of George Benson, without the smooth-jazz overtones. With unison headline statements and blistering solos, Earland gives plenty of space to his players, laying down the groove in good company.

I enjoyed reprising this record, occasioned by my search for Van Gelder’s “missing years”.

Hammond B3 hero Charles  Earland came into his own at the end of the ’60s. After appearing on a number of Lou Donaldson titles for Blue Note, he signed with Prestige, who were looking to expand their catalogue in the soul-jazz genre, with street-appeal titles like Black Talk, Black Drops, and Living Black!

Nicknamed The Mighty Burner, Earland released eight titles  for Prestige before moving to Mercury, Muse and later, Milestone and CBS.

He picked up on popular themes in their day, mystic and outa-space associations, with titles like Karma, Intensity, Revelation, Leaving This Planet, and Perceptions, the only soul-jazz album I owned in the late ’70s, for its hit track Let The Music Play . There is a closet soul jazz fan here, well-hidden, grooving away in a darkened  basement disco practicing their dance moves.

Later Earland titles settled on associations with his  “Burner” nickname – Third Degree Burn, Front Burner, and towards the end, The Almighty Burner. Earland’s discography lists nearly forty releases before the  final curtain fell in 1999, aged 58. It is tempting to think that, in the end, The Mighty Burner would have chosen cremation, and gone out in style, smokin’ to the very end. (Ed: Isn’t that in rather poor taste? LJC: Possibly, sorry.)

Earland is more soulful to  my mind than Jimmy Smith, whose pyrotechnics tend to leave me weary, and more hard-driving than the musically more-exploratory Larry Young. There, that should have offended enough people.  Earland drives and cooks. With what those bass pedals save on the employment of a bass player for the session, his budget can stretch to exciting sidemen like Bill Hardman, whose fast-tongued phrases perfectly complement the swinging Hammond.

One of his producers, Bob Porter, describes Earland’s approach to the Hammond  thus:

“No one can “kick the 3” quite like Earland. His organ style reveals perhaps the best walking-bass line among organists and a unique second type of bass line that creates a rolling, long-meter feeling on rock tunes. In addition, he has a true feeling for melodies. His melodic phrasing is second to none among organists…”

Among Earland’s producers was Ozzie Cadena, who released one of Earland’s first titles for his Choice label, the person who  links Earland to Van Gelder to Prestige, Savoy and Muse.

After completing military service in the Pacific, one of Ozzie Cadena’s early jobs  was in a radio and record shop in  Newark owned by Herman Lubinsky, who was also the owner of Savoy Records. Ozzie segued to become a producer and talent scout for Savoy between 1954 and 1959, recordings including  Cannonball Adderley, Milt Jackson, Yusef Lateef, and Charles Mingus. Veteran drummer Kenny Clarke helped recruit musicians for Cadena, who  arranged some one-time recordings at Van Gelder’s Hackensack home studio.

Connections, connections. In the early ’60s, Cadena started his own record label, Choice, which released albums by Charles Earland among others. When in the late ’70s and ’80’s Muse and Savoy Jazz began releasing jazz titles and reissues, it was natural that Cadena would return to Van Gelder and Englewood Cliffs for the Muse/ Earland date, held at the Spiritual Home of the Soul Jazz Organ, inhabited by the spirit of Jimmy Smith, Big John Patton, Freddie Roach and Larry Young.

Cadena later settled in California, promoting jazz in Hollywood and LA , including at the  famous Lighthouse Cafe, the historic ’50s-era venue in Hermosa Beach. His final curtain fell in 2008, at the age of 83. An important facilitator and promoter of the course of jazz, tendency soul.

In my usual dilettante fashion, I knew nothing of Ozzie Cadena until I noticed his credit as producer of the Muse/ Van Gelder, and curiosity nagged away to unravel the story as to why RVG appears in the run-out of a 1979 Charles Earland soul-jazz recording, Mastered by Van Gelder.

The liner notes are worth a read, at 1800px, unless you are reading on your phone perhaps, book into Specsavers. 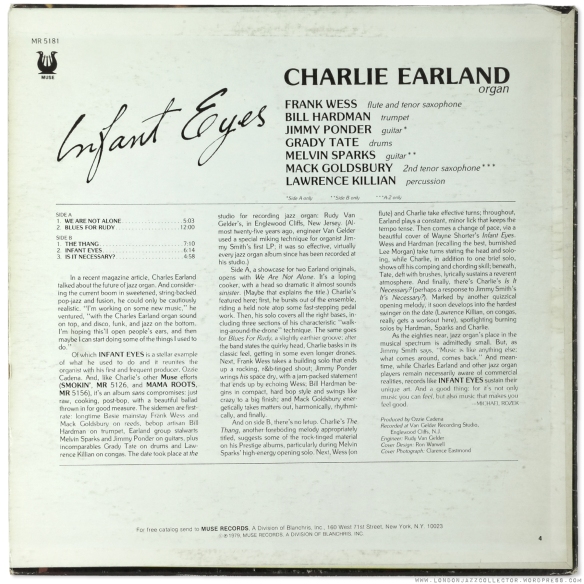 Following the Van Gelder trail has, once again, taken me into unexpected territory. I never expected to connect Rudy with organ soul-jazz in the late ’70s, though it is now entirely clear how a van Gelder stamp appears on such a title. Too many of our jazz heroes are celebrated when their obituary hits the cognoscenti inner pages of the New York Times and London’s Guardian. With Van Gelder now in his ’90s I’m getting my appreciation in first.

Lets give the soul jazz organ fans an extra treat –  with a bonus track from this bopping  Earland LP, the answer to Jimmy Smith’s It’s Necessary? with the hardest-swinging track Is It Necessary? It’s kind of similar title but better grammar, possibly an in-joke among Hammond B3 players.

Selection: Is it Necessary?

If you reference the liner notes regarding this track, jazz and Rolling Stone writer Michael Rozek notes this track “spotlighting burning solos by Hardman, Sparks and Charlie”, of which there are none in the spotlight, aside from Charles Earland cooking away. Perhaps it is like the a case of the sports journalist who filed his copy before seeing the match, generally a reckless move. Alternate take?

Connoisseurs of Jazz musicians longevity may have noted that Earland’s tenor and flute player here, Frank Wess, died only a little over a years ago, at the age of 91.