With a lengthy run-out groove, and only a couple of inches of vinyl dedicated to music, and importantly, pressed at 45 rpm (something  not disclosed on the cover) it yields up no more than around six minutes on one side, a shade more on the other. Umm… astonishing … value…

Under these circumstances I don’t think its fair to post one track, which would be virtually giving away the whole record. Nevertheless, see update at foot of post,  extra helpings, selections previously posted of the track Manumission and more, from Rendell’s studio album Roarin’, on Riverside sub-label Jazzland JLP51

The British Broadcasting Corporation, national TV and radio broadcaster, made lots of  recordings during the musically fertile ’60s, intended for  radio broadcast. The BBC is funded by compulsory license fee, which I pay. So I have already paid once for BBC recordings. That doesn’t occur with any commercial recording I am aware of. Lets not get the lawyers in but these things are already (partly) mine.

The original recording source of many BBC radio sessions are ‘BBC transcription service’ discs, created for distribution of BBC recorded content to overseas anglo-phone radio stations (Commonwealth outposts in the main). In the late ’40s the  BBC introduced coarse groove 16-inch discs holding 10 minutes per side, at 33⅓ rpm. A limited number of copies were made with instructions to the overseas radio network to destroy the disc at the end of the licence period. This is a similar condition applied to  for American “V-discs” produced, with striking musicians  union special dispensation, to boost the morale of US troops in WW2 – a condition which rather depended on which side won . Since the side of Free Enterprise won, it looks like most American V-Discs were sold  on the open market rather than destroyed, a victory for common sense, I’d say.

I had never heard of BBC transcription discs before, nor had I heard of US V-discs until recently. Great thing with Jazz, you learn something new every day.

BBC  transcription discs evolved into 12″ , distinguished by the Transcription Service labels featuring universally recognised British landmark Big Ben, and Lenny the Lion. With the rise in collectability of ’60s rock and pop, these became “highly prized collectors items” containing unique pop and jazz performances,  to remind you, some of us have already paid for. 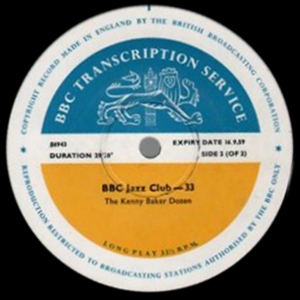 As an aside, LJC always the cultural observer, The Beatles transcription disc set below , which fetched almost $1800, includes a fascinating interview with John Lennon. Asked if he supports any political party, millionaire Lennon parries the question, by saying  :

I’d call that a draw? He might have suggested that a good way to avoid being stony broke and starving might be to take up playing the guitar and writing a few songs. Worked for him.

To judge from the few I have, recordings made for ’60s radio play rarely show  hi-fi  sparkle, surprising if it were otherwise. I guess they were engineered for the requirements of the radio medium in the ’60s,  and with a few exceptions, sound to me like “domestic radio” – solid mid-band and light at either end. Only one BBC (live) recording I have displays the very wide dynamic range I expect on records engineered for hi-fi replay.

None of this is to diminish the creative content present in these unique for radio/TV performances, merely how they sound as a vinyl reissue in a revealing hi-fi, compared with  best sounding records in their class.

Every now and then I put some of my old ’60s rock albums on the turntable, and they sound pretty horrid compared with jazz albums recorded in the same years. Rock-based sound engineers and radio producers had radically different ideas as to what music should sound like,  based on amplified electric guitars, electric bass and pre-eminent vocals, and particular attention paid to haircuts and expressions to camera.  A different planet from the Van Gelder recording studio, where only sound mattered.

Pressing this record at 45 rpm effectively reduced the quantity of music offered by half compared with standard 33 1/3, with little if any  audible benefit in sound quality in return, given the nature of BBC recordings. Given the decision to release it as a 10″, I can’t help feeling the right commercial thing to do would have been match the reduction in quantity of music with an equal reduction in  cover price, but may be that is just The John Lennon School of Economics. 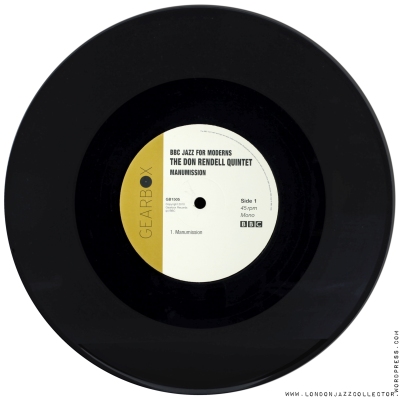 One saving grace of this release, given the small music content,  is a marvellous British take on Art Kane‘s A Great Day in Harlem (below) , that unique group portrait of 57 notable jazz musicians photographed in front of a brownstone in Harlem, New York City in 1958.  Many are turned out in sharp suits, collar and ties. 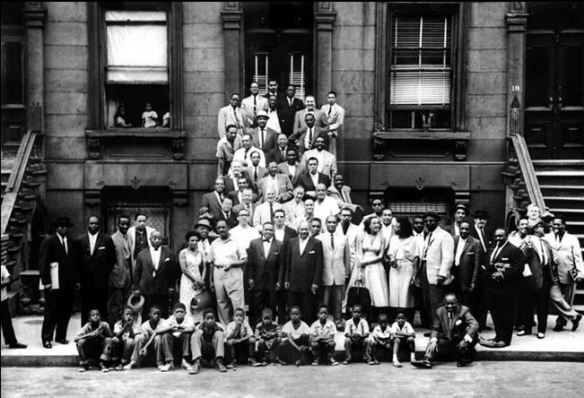 Pictured on BBC Jazz for Moderns, below, a little less than forty of the leading lights if the British jazz scene of the day, herded together on what looks like the steps of Nelson’s Column, Trafalgar Square, a stones throw from the heart of the London’s Soho. Most turned out in raincoats, that’s London, raincoats get a lot of wear.

The party trick with this record cover  is to drop the needle, retire to the sofa, and see if you can correctly identify all the musicians by name before the music stops.  Which doesn’t give you much time. Start with Tubby Hayes,  inside fifth right bottom row, instantly recognisable grin and girth, despite the raincoat.

This limited print run (500?) is apparently sold out, so they must be doing something right.  But withholding crucial track length information on the cover I think deserves time on the naughty step. However, fellas, I’m not going to tell you how much time on the naughty step: that you’ll have to work that out for yourselves. Could be years.

The Gearbox featured track on one side Manumission was also released on a Jazzland LP, Don Rendell’s Roarin’, an LJC post in 2012 – with longer selections, and more tracks. Whilst the Gearbox edition is the version recorded for BBC Radio, for the record, the selections from the Rendell Jazzland album for Riverside are repeated here (earlier selections via USB tt only –  hadn’t then mastered ripping vinyl from the main system).

Rendell is a fine player, and his recordings are rare and highly sought after. What would be really interesting is to pit this Rendell track for BBC Radio on 45rpm against the studio version of the same track for Riverside on 33 1/3rd rpm, level playing field, both ripped properly from the main hi-fi system. That would indeed be interesting. I wouldn’t like to predict the outcome.

Selection: Bring Back The Burch

While we are on a roll, why not generously add a bonus selection from Don Rendell’s Roarin’ , Blue Monk

That’s all for now, folks. No, hold on, we’ve yet another

Selection: You loomed out of Loch Ness

A veritable Billy Bunter special. Four extra  helpings of Rendell. That really is all for now!