Over sixty years old, seen better days, and not at all in very good shape. But that’s enough about me, lets get on and talk about this Tubby Hayes Tempo.

Ronnie Scott often pushed forward as the tenor voice, whilst Tubby returns often to vibes. I guess vibes were  thought of as the height of jazz sophistication at the time, less so in retrospect.  Tubby’s tenor voice glitters like gold. This smacks of confusion in the early days of what was what –  MJQ, cool jazz, who knew which direction to take?

I’ve selected the tracks that feature Tubby on tenor, my gaff my rules. Ronnie Scott is the more measured tenor soloist, Tubby is altogether more acrobatic, described once in the lightening-bolt accuracy of the right words, as “cockney garrulous”

British jazz in the late ’50s was indeed a niche, not really known to the mass audience. This isn’t to my mind the best of Tubby’s Tempos, though it has its moments. I wished that it had more Tubby tenor, but in 1957 perhaps the best was still to come.

This is the story behind the post:  if you were able to have a “piece of  jazz history” albeit dishevelled and poorly cared for like this original Tempo, or you could have a pretty acceptable excellent condition ’80s re-issue, how much is “sentiment” important to you?

It’s a real dilemma, because a top copy of these Tempos is serious money.

Up to £1200 for a high quality copy – if you are lucky. Tempos were allegedly sold only in one London store, Dobells (see Simon Spillettt’s comments at the foot of the post, this is often repeated but may not be true – beware the internet echo chamber) and pressed in runs of less than a thousand, I read. That is Mobley 1568 territory (only 800 copies pressed)

But how do you separate out the “ownership” of a historically important item, with its condition? Jasmine copies are indeterminate origin, typically found in record store racks for £10-£15. People have told me they “got rid of their Jasmines”

This Tempo has some lack of care issues, but it is a piece of history, and despite the surface issue, sounds as it should, superb (apart from the surface noise) And the top half of the label is a fine shade of purple.

The back of the cover shows significant wear, including what looks like it might be a Tippex repair. My God, when did you last use a bottle of Tippex? Or maybe just off-white paint. If the Jasmine cover was in this condition you would toss it, but this is a distressed antique, different standards apply.

What on earth prompted Jasmine to overlay that monotone purple on the picture of Tubby? It locks it into ’80s photo-trickery and looks cheap, (which of course it is).

I have heard the Tempo tapes were lost by Decca  in 70’s, though I have also been told that’s not true. However no one has turned up with any tapes and Sawano Brothers admit to dubbing their Japanese Tubby releases from vinyl. No-one seems to know anything definitive.

The test that mater are whether Jasmine reissues offer an acceptable listen, whether  original Tempo worth the pain and cost to track down, and how important is owning an original cover, that piece of history. 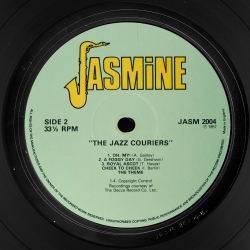 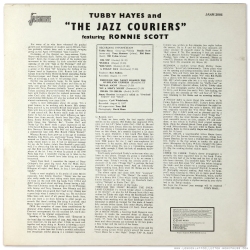 This is the moment of truth: “I’m only interested in the music (quality)” versus the antique collector :

This is one of those unsettling things, where find you need to go back on what you have always said. “The only thing that matters is what it sounds like”….”covers aren’t important, it’s the vinyl you play”…” Are you a music lover or an antiques collector?”

I’m happy to own a “piece of history”, perhaps because it has a special place in our hearts for being British and its home in the mid-50s, something I never really experienced., being a decade too late, rather than it being “nostalgia”.

When it comes down to deciding which to play, it’s the Tempo every time. I don’t believe in sentiment, but I find it has its place for a collector. Anybody else chime with this?

Apologies for light blogging of late , the Prestige Research Project is consuming copious amounts of my time. Visitors might want to delve back into the 600 odd previous records posted. It’s all there for the taking.