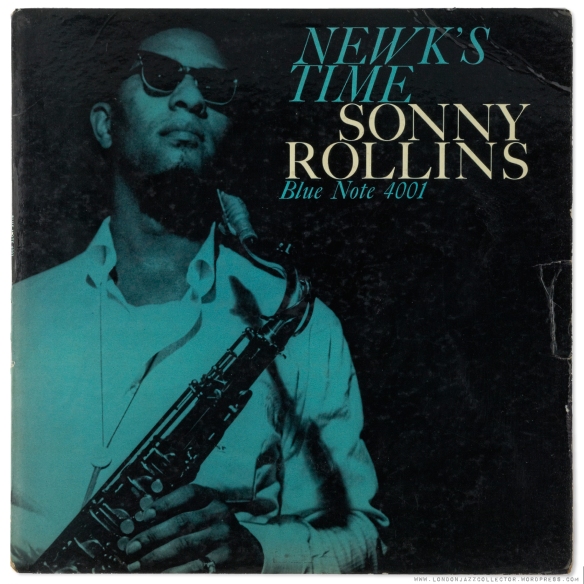 In the preceding year, Rollins recorded his most iconic works: Saxophone Colossus, Tenor Madness, Way Out West, Sound of Sonny, and two Volumes for Blue Note. Newk’s Time shows Rollins in his most fertile period, prior to his lengthy sabbatical (’59-’62).

A mixture of Tin Pan Alley show-tunes and  strong bop compositions from Miles Davis and Kenny Dorham, this is a classic Rollins set, noted for the interplay between Rollins and Philly Joe rather than the ensemble work, which is nonetheless sympathetic. Wynton Kelly’s  piano comping is both harmonic and  rhythmic, freeing drums to spar with the lead instrumentalist.

Rollins demonstrates his mastery of improvisation around the heads and changes, with witty or ironic quotes, and sparkling exploration around the melody. The result is an eagle soaring over the landscape of Coleman Hawkins and Charlie Parker. All these Rollins records are essential, and Newk’s Time is no different.

The first of the Blue Note 4000 series, sporting the last 9M in its runout. The side 1 ® label betrays its later origins, a second pressing somewhere round 1960-1, though from original van Gelder-derived metalware.

The true original is DG both sides and likewise no ® either label, as seen below.

The label is only one aspect of authenticity. The re-use of original plates (mother/stamper) is more relevant to audiophiles, who are getting original sound quality without original labels. Here the collectors divide according to their aspirations, 1st pressing fundamentalist, or van Gelder engineering enthusiast.

BLP 4001 was by all accounts also released in (true) Stereo by Blue Note, though not easily found. The Liberty however is not pressed from any original Blue Note stereo plates, hence no RVG stamp, an impostor, re-mastered by Liberty engineers, one assumes from the original two track tape. 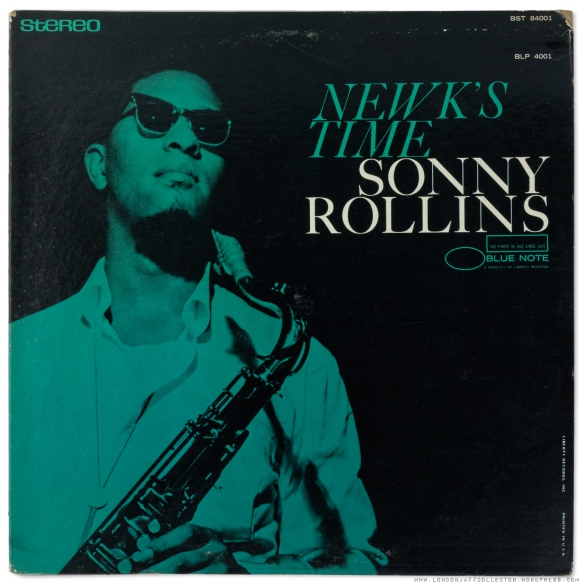 Curiosity prompted me to add the Liberty stereo to my collection and we know what curiosity does to cats. A stereo master tape exists according to Fred Cohen. May be it does. May be this from it.

Saxophone, piano and drums on top of each other in the left channel, bass on the right. (Charitably, Rollins may be left of centre, as DGmono has opined, but the rhythm section is definitely out on the limbs) On full stereo rig with speakers 10 feet apart (not just a pair of PC speakers) I found it a complete car crash, cats in a sack. If you were to judge the album by the first track you would be forgiven for taking an axe to it.

But wait!  First track Tune Up is not the whole story. As you  move on to the remaining tracks, a ray of sun shine opens up. Normal audio service is resumed. Take the presentation on track two, the sprightly Dorham composition Asiatic Raes.  (Raes? No, my spellchecker didn’t like it either) very pleasingly balanced stereo.

Asiatic Raes, the second selection, is apparently the tune Lotus Blossom recorded by composer Kenny Dorham on his ultra-collectible Prestige album Quiet Kenny. There is also an Asiatic Raes credited to Dorham on Hubbard’s Blue Note Going Up. One can’t but help think the connection between Lotus Blossom and Asiatic Raes might be a forced misspelling of Asiatic Race? (From ancient times the lotus has been a divine symbol in Asian traditions) . Perhaps the intention is ironic.

It’s a mystery how one track can go so badly adrift when every other track is fine. Its not just one thing or another for the whole album. Bad Stereo one track, good stereo the others.  What the story is behind this I have no idea.  Perhaps Liberty had to revert to the mono tape for just that track, reasons unknown, and electronically fake it for stereo, but had good two track tape for all the other songs titles. That’s my theory, but I could be wrong. It wouldn’t be the first time.

For the benefit of readers of liner notes, I’ve experimented  here with RAW processing and the application of a judicious amount of unsharp mask before conversion to jpg, rather than shooting in jpg to start (where the camera decides sharpness).  Judge the results yourself at full screen. Perhaps this is in reaction to crawling over blurred Ebay shots of Prestige covers, squinting to read the cover address that distinguishes early from later pressings. Posterity deserves something better. It’s not difficult. 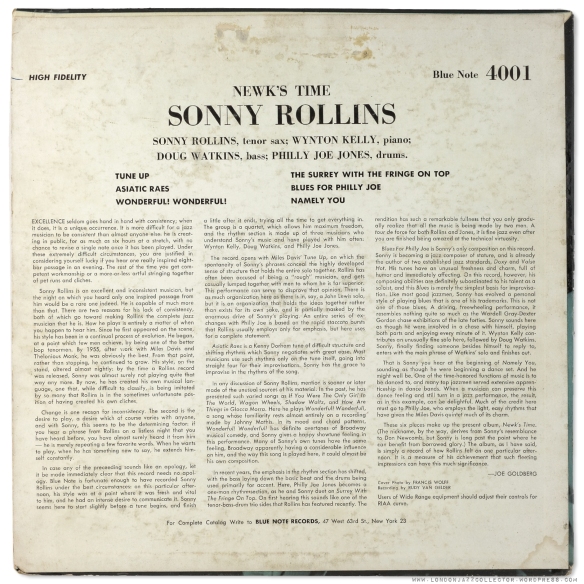 For completeness, I couldn’t leave this post without the original fabulous mono presentation of Asiatic Raes on BLP 4001

Or a taste of the Freddie Hubbard / Hank Mobley version, courtesy of YouTube

Liberty reissues both mono and stereo

In the later ’60s Liberty understood the market expectation for stereo. However, Liberty issued both a mono and a stereo Division of Liberty copy of this title, one of the few they put out in both formats. Somehow, I sense something unusual was going on here.. 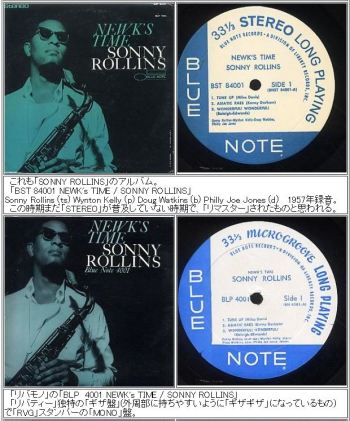 There was clearly a story behind 4001, maybe something to do with the source tape for track one, Tune Up?  Perhaps our friends form Tokyo know the answer. Does anyone have the original Blue Note Stereo copy of BST 84001, who can shed any light on this mystery? Or was Liberty the first stereo release?