Stereo that never was…

Selection: Poppin’ – as published, in Stereo

More m…m..m..Mobley! Between November 1956 and April 1958 Mobley recorded ten solo albums and played on twelve others. This 1957  session Poppin‘ never made to wax at the time, but it’s a beautiful session, with Art Farmer’s liquid gold offsetting Hank’s malted chocolate tenor, Pepper Adams grinding chainsaw baritone spicing up the brass line-up, while Sonny Clark bounces boisterously up and down on the piano. Philly Joe and Paul Chambers simply lay it down straight.

Mobley plays with a delightful unevenness in pace and direction, throwing notes, climbing scales, sliding flourishes, freshly minted ideas on the fly, all in a smeary nasal drawl that is instantly recognisable as Mobley’s voice. I don’t already know where he is going to go or where he will pause, where turn to next, but I know he will carry me with him. There are times are when Rollins and Coltrane, his comparators,  are too relentless, exhausting, driven. Mobley is a walk in the park, makes me smile. Life today, a smile is good.

This was never intended to be a stereo recording.

Between May 1957 and October 1958, Van Gelder was recording in both mono and two-track. In Van Gelder’s words “”the two track was filed away and basically ignored” (cited by Fred Cohen). Hackensack had only one monitoring and playback speaker, and no-one at the time had heard or monitored this recording in Stereo (Fight! Fight!)

King Records  issued mono only when that was all that was available, GXK #### (M). In this case Tokyo must have been sent the two-track tape – or asked for it in preference, as a mono version was sure to have existed. No doubt King Records engineers couldn’t believe their luck in finding a “stereo” Hackensack two-track recording from as far back as 1957, previously unissued, and couldn’t resist issuing it for the first time, in Stereo. Moreover when they issued it again a year later, that too is stereo. May be they said to each other, “I know, I know, but it’s the way Rudy wanted it. Who are we to disagree?” (in Japanese, of course)

What you get served up in stereo is the ultimate in hard panning. Each soloist is  jammed into the left channel, in turn one after the other, no semblance of soundstage or instrument placement,  just raw material, living proof that  two track this early was never intended for stereo release: merely a vehicle to give the engineer greater control over the final mono mix. Fortunately, a mono switch on the phono-amp corrects the engineer’s decision. Now it is the way Rudy heard it.

This Mobley session  went on to be issued by Mosaic Records MQ10-181 long out of print, and by Toshiba on ESD. If anyone has the Mobley 10 LP box set, firstly, congratulations, several hundred dollars well spent there. How did Cuscuna decide to handle Poppin’ ? Mono or Stereo, or a more  judicious remix. Who’s the master engineer? The improbably named Ron McMaster?

The label  © below says 1981, so it should be the year later 2nd pressing, or may be I don’t understand what our friends at microgroove.jp are saying. Anyway, what’s a year? (A long time if you are waiting for a record in the post!)

Personally I can listen to lots of Mobley. I had a few issues with the stereo but managed to get that sorted. Like the last Lee Morgan post, there are lots of good people playing here, it’s a vehicle for all of them. And if you don’t like one, no problem, some one else will be along in a minute. Small doses of Art Farmer here have got me listening and warming to him, more so than a full “trumpet album”. And you can’t have too much Mobley.

A little more on Mobley The Man. Some of you will no doubt be familiar with it, but there is a long thread on Organisimmo, back in 2008, with three pages of comments about Hank, which Mobleyists can peruse at their leisure.  (There is a nice riposte as to who coined the description of Mobley as the “middleweight champion of the tenor”?  “Leonard Featherweight.” someone replies.)

I’d like to repost just the tribute article here, as fitting addendum to a Mobley posting. 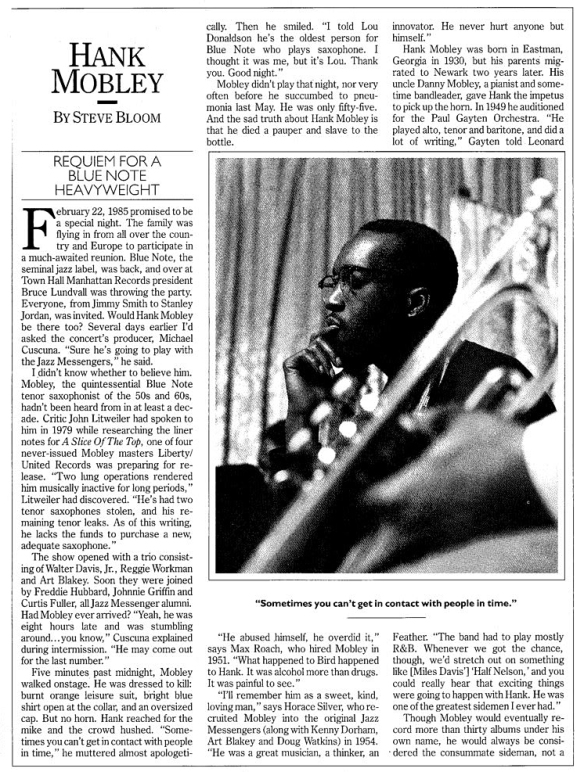 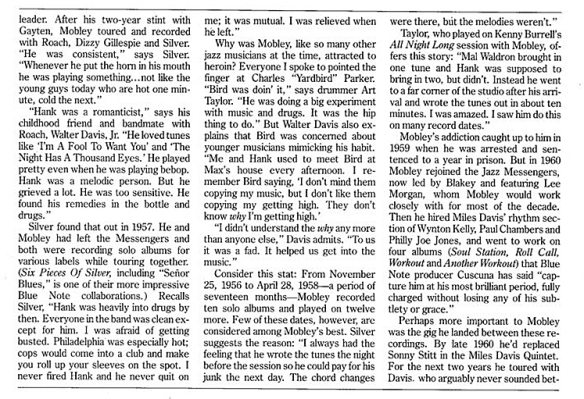 UPDATE: By one of those extraordinary coincidences that dog record collectors, I bought an Art Pepper Mosaic recently, dating from back in 1985. Unexpectedly, the original British owner had stuffed in the back of the box along with the Mosaic invoice, a poster that  Mosaic had included, advertising a Blue Note special evening concert in New York February 22nd, 1985, to promote the revival of the label by Capitol Manhattan. Look familiar from the opening of the Mobley article? Sadly no mention of an appearance by Hank. 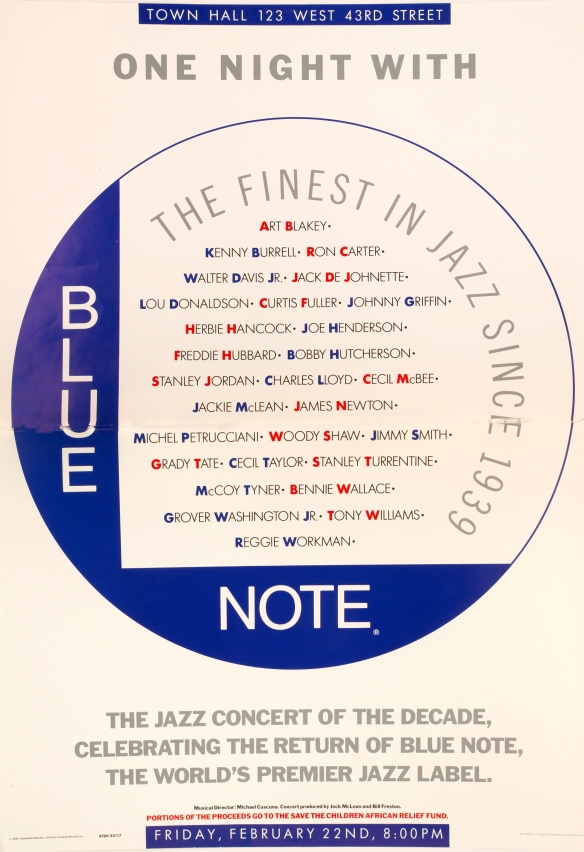 Look at that line-up? Wouldn’t you want to be there? Mouth-watering. Where the hell are they keys to my time machine? Damn! It’s in for its’ 100 year service! Anybody out there got to it, do tell? It’s only 30 years ago.